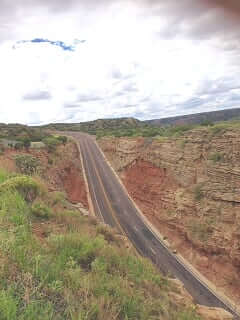 The Road We Traveled

Thanks for joining me over the past years for Cancer Week on Romance Lives Forever (hugs for Kayelle!) as I delve into Handsome’s journey with esophageal cancer and reconstructive plastic surgery.
This past January, a small scabby hole appeared on Handsome’s lower left jaw where the skin was thin. The doctor had stitched it closed after the reconstructive surgery last summer; however, we crossed our fingers and prayed the area would stay healed. We were hopeful for a long while. When the spot appeared to grow larger, I asked Handsome if I could touch it, and indeed, I felt the titanium plate. This scenario wasn’t ideal as infections could set in and destroy all the surgeries he’d undergone. We sent photos to the doctor who insisted we come in immediately.
“Coming in immediately” meant driving to Houston which wasn’t a bad trip. Mostly, we were tired of the drive. Tired of the whole thing.
The doctor confirmed the thin skin issue and prepared us for adding another graft plus an artery. The surgery would take place in the middle of February. Handsome would stay in the hospital for about five days. Easily doable.
The surgery went well. Every day, the doctor and the fellow checked for pulse and the color of the graft. Handsome healed so quickly, they said he would be released the following Saturday. Great rejoicing! But on Friday, the fellow checked the pulse. Good near his heart; not good on the graft. In fact, the graft looked like bad chicken skin, all pale yellow-ish and wrinkly. The doctor wanted to see if the graft could be saved and rolled him straight into surgery. The team worked for hours. Afterwards, the doctor said it was a “maybe” and would look at him the next morning. Because of the awkwardness in intubating Handsome, he was kept under sedation in ICU.
Early the next morning, the fellow determined the graft would not survive, and they would be redoing the surgery with two arteries for more blood supply. That was when I got panicky. During all of Handsome’s surgeries, I had been cool. I kept busy with reading, writing, and stitching, but this one got to me. #2 son phoned and asked if he should drive down. For the first time, the need for handholding swamped me. I said, “Yes.”
The 3 x 4 inch grafted tissue came from Handsome’s left wrist area. The arteries from his leg. He stayed another five days with no problems. Obviously, he had grown weaker from having had a second surgery. The progress he’d made with swallowing and neck strength all dissolved. His speech was compromised. Fatigue took over.
To date, Handsome has had ten surgeries in two years, fifteen feet of stitches. The belly tube would stay for another five months. He underwent lymphedema therapy in Houston and ultimately, moved it to a hospital closer to us, which he continues.
Nothing about his surgeries have been easy. Handsome has healed and the doctors are very pleased. VERY. He (laughingly) whined the other day about being tired of the whole thing and wanted our old normal back. He’s allowed to feel this way. I want our normal back too—in every aspect of our relationship. A huge goal to swallow is front and center so he can eat when we cruise the Adriatic Sea in 2019. Even though he has a long haul ahead, we are very hopeful.
How did he get cancer? No one has figured it out. Acid reflux? Maybe. Alcohol? Probably not. HPV? No. Smoking an occasional cigar? Doubtful. Parents smoking? Who knows. Working in oil fields? Possible.
What we do know is this: if you don’t want esophageal cancer, be healthy. Eat right. Drink moderately. Don’t smoke. Exercise. 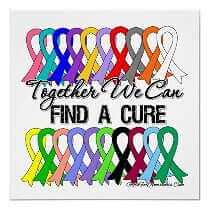 But the truth is Handsome did all those things. Does this mean not take care of oneself? Absolutely not! If he had not been as healthy as he was, surgery and recovery would have been harder or impossible.
For those of you undergoing cancer treatment, I’m with you. You are some of the strongest people I know, fighting a horrible disease.
We often say a path had been put in front of us and that was the road we had to travel. And no whining.
The Great Fruitcake Bake-off: When five-time champion Samantha Greene teams up with her new neighbor, Dixon Roberts, for The Great Fruitcake Bake-off, they discover baking a prize-winning entry is complicated, bad guys are plotting to take the crown, and first prize isn’t just about a ribbon.

Where to buy Whispers of Winter 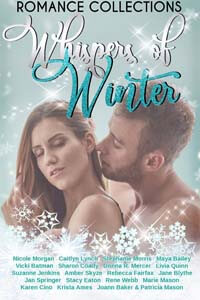