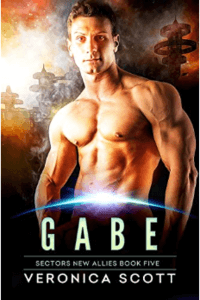 Veronica Scott, welcome to Romance Lives Forever. I’m Kayelle Allen, author and owner of this blog. Happy to have you here! We’re excited to find out more about your hero, but first, tell us about the book.

Genre Science Fiction Romance
Book heat level (based on movie ratings): PG13+
Gabe Carter, hotshot pilot and ex-Special Forces soldier, is far from his home in the human Sectors, kidnapped by alien scientists to be the subject of horrifying experiments. Shot down by the enemy over desolate territory far from his Badari allies and gravely injured, Gabe’s only hope is a mysterious woman on the run herself.
Keshara has to decide whether to abandon the human to die of his injuries on a windswept mountain top or give up her own quest for freedom and take him to a place he can be helped. The undeniable spark between them complicates matters.
His attraction to her is off the charts but when she betrays him to the Khagrish enemy, Gabe doesn’t know what to believe. Trapped inside an alien lab bursting with mysteries and lies, his only hope may be to trust her…again.
Because the renegade alien scientist running her own private experiments wants to use him to accomplish her goals and perpetuate the evil, no matter what she has to do to ensure his compliance. Keshara’s life hangs in the balance and Gabe has to make a choice.
This is the sixth book in the Badari Warriors world (and the fifth book in the series) and each novel has a satisfying Happy for Now ending for the hero and heroine, not a cliffhanger. Some overarching issues do remain unresolved in each book since this is an ongoing series but romance always wins the day in my novels!

Here are some fun questions to help us know your hero.
It’s late, he’s bored. What does he do?
Gabe can’t stand being inactive or bored so he’d get up a card game with buddies, maybe go for a late night run or volunteer for extra duty in his pilot job.
What kind of food would he impulse buy if hungry?
He works hard to stay in shape, to be prepared for combat missions and eats very healthy foods, so probably a mix of carbs and proteins, maybe trail mix with nuts and dried berries if he only needs a snack.
Describe the kind of clothes he prefers to wear.
He generally wears black tee shirts, camouflage utility pants and combat boots. Plus of course his knife and a blaster!
Does he know how to fix things?
He’s a soldier and a pilot primarily but he’ll make an attempt to fix things in an emergency. He’s got a good technical mind and understands the bigger picture of how things work in his technologically advanced universe. His way of fixing things might not be the conventional solution but it works.
He tried to do something and it went badly. Tell us about it.
Gabe does the best he can under any situation and if there’s a failure, he learns from it and moves on. He’s not easily defeated – he’s constantly thinking of alternative solutions and will only give up when he’s dead…so, in effect as long as he’s breathing, he’s moving forward and problem solving.
The book begins with him flying through a storm, trying to escape three enemy fighters, and he eventually crashes, but Gabe perseveres despite his injuries.
How does he act around children he doesn’t know?
Gaber doesn’t have much experience with kids but he likes them, especially their thirst for knowledge about the world around them. He enjoys tutoring the Badari cubs in the sanctuary valley, which he does as he has free time.
What is he like first thing in the morning?
He’s not a morning person but give him something hot with a hefty dose of caffeine and he’s ready to go. In combat situations, he doesn’t have the luxury of waiting for the ideal time of day, so he’s trained himself to respond rapidly at any hour of the day or night.
How does he act around people who don’t know what he is?
Gabe’s always himself – he doesn’t put on airs and he’s not boastful. What you see in what you get with him. Most people in the valley are aware he’s an ex-Special Forces soldier and they know he’s a hot pilot. They can see how the Alpha relies on Gabe for tackling dangerous assignments, so he lets his actions speak for him.
Will he let a worker handle things or do it himself?
If a worker is assigned to do a specific task, like servicing the engines of captured enemy flyers, he’ll stay out of the person’s way. Otherwise, he’s a self-service kinda guy who’d rather just take care of whatever needs doing.
Earrings/piercings/tattoos or unadorned skin?
He has a Sectors Special Forces tattoo on his upper bicep. No piercings. Not to give spoilers here but IF Gabe was to become the mate of a Badari woman (author gives coy grin here – you’ll have to read the book), then he’d receive a ‘claiming mark’ on his shoulder, which the Badari goddess would turn into a golden circle like a tatt on his shoulder, to show her approval of the mate bond.
Personal vehicle or public transport?
In the dire situation on the Badari planet, there aren’t any private vehicles. He flies shuttles which have been captured from the enemy, in support of military operations.
Recycle or toss?
Recycle! Gabe’s a practical guy and he cares about the environment.

USA Today Best Selling Author
“SciFi Encounters” columnist for the USA Today Happy Ever After blog
Veronica Scott grew up in a house with a library as its heart. Dad loved science fiction, Mom loved ancient history and Veronica thought there needed to be more romance in everything. When she ran out of books to read, she started writing her own stories.
Seven time winner of the SFR Galaxy Award, as well as a National Excellence in Romance Fiction Award, Veronica is also the proud recipient of a NASA Exceptional Service Medal relating to her former day job, not her romances!
She read the part of Star Trek Crew Member in the audiobook production of Harlan Ellison’s “The City On the Edge of Forever.”
Blog https://veronicascott.wordpress.com/
Twitter https://twitter.com/vscotttheauthor
Facebook https://www.facebook.com/VeronicaScottAuthor/
Goodreads https://www.goodreads.com/author/show/5428500.Veronica_Scott
Amazon Author Page https://www.amazon.com/Veronica-Scott/e/B006CUCJ92/
Newsletter https://us7.list-manage.com/subscribe?u=2a337b96e2ee1ee1250004b9d&id=7462393c9e