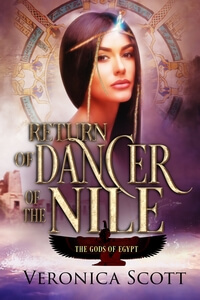 Veronica Scott, welcome to Romance Lives Forever. I’m Kayelle Allen, author and owner of this blog. Happy to have you here! Please tell us about your book.

Nima, formerly a tavern dancer in the land of the Nile, has settled into the leisurely life of her dreams as the pampered, beloved wife to a high ranking general who’s also a member of Pharaoh’s court. She’s sworn never to dance for anyone else but Kamin, the man she loves. All is fine until one day news arrives that her husband has been killed in a chariot accident while on a trip to a remote city on Pharaoh’s behalf.

But as a reward for their previous service to Egypt against a dangerous enemy, the gods had promised Nima and Kamin they’d die at the same moment…so if she still lives, so must he.

Why is the ruler of the city lying to Pharaoh about Kamin’s death? What is the woman covering up? And where is Kamin?

Time for Nima the elegant lady to vanish from Thebes and Nima the skilled dancer to make her way in disguise to the far distant province and fight for Kamin’s life. She’ll have to deal with angry gods, black magic, an enemy prince and a deadly ghost along the way.

Standalone sequel to Dancer of the Nile.

I’ve always been fascinated by ancient Egypt and this is my tenth novel set there. I love the challenge of telling a good story, with the gods taking an active role in the events. Mixing romance and adventure with the details of life along the Nile thousands of years ago is a challenge I relish. I was excited to return to Nima the dancer and Kamin the soldier, who both first appeared in Dancer of the Nile and tell more of their ongoing story. This is a standalone book but there are mild spoilers for the first book. And I relish the opportunity to put all my historical research to work and create an environment where readers feel at home in ancient Egypt, but keeping it relatable to the modern audience.

Science fiction romance is my first love, filling my e-reader (and what I write primarily), but I also read paranormal, fantasy, urban fantasy, thrillers and Regency romance.

Going by what I reread the most, Judd Lauren in Nalini Singh’s Caressed by Ice. He was the template for all her lethal Arrow soldiers who fall in love and they’re my favorite characters in her Psy/Changeling series. She makes me feel like I want to be the woman to melt that ice! I’m also always impressed by Frederica in the Regency romance novel of the same name by Georgette Heyer.

Currently I’m writing a holiday novella set in my fantasy romance world of Cladddare and having fun with it. After that I’ll be writing the next book in my scifi romance Badari Warriors series about genetically engineered soldiers of the far future.

In October the fourth annual Pets In Space® anthology releases and I have a full length scifi romance Star Cruise novel in the collection, all new. The fantasy holiday novella I mentioned should be out in November and hopefully the next Badari Warriors will be released in December. We’ll see how I do on that schedule!

USA Today Best Selling Author
“SciFi Encounters” columnist for the USA Today Happy Ever After blog
Veronica Scott grew up in a house with a library as its heart. Dad loved science fiction, Mom loved ancient history and Veronica thought there needed to be more romance in everything. When she ran out of books to read, she started writing her own stories.
Seven time winner of the SFR Galaxy Award, as well as a National Excellence in Romance Fiction Award, Veronica is also the proud recipient of a NASA Exceptional Service Medal relating to her former day job, not her romances!
She read the part of Star Trek Crew Member in the audiobook production of Harlan Ellison’s “The City On the Edge of Forever.”
Blog https://veronicascott.wordpress.com/
Twitter https://twitter.com/vscotttheauthor
Facebook https://www.facebook.com/VeronicaScottAuthor/
Pinterest https://www.pinterest.com/jdwalker626/
Instagram https://instagram.com/veronica_scott_author/
Goodreads https://www.goodreads.com/author/show/5428500.Veronica_Scott
Amazon Author Page https://www.amazon.com/Veronica-Scott/e/B006CUCJ92/
Newsletter http://wordpress.us7.list-manage1.com/subscribe?u=2a337b96e2ee1ee1250004b9d&id=7462393c9e