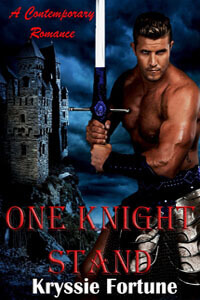 Kryssie Fortune, welcome to Romance Lives Forever. I’m Kayelle Allen, author and owner of this blog. Happy to have you here! Please tell us about your book and this interesting thing about vampires…

The ancient order of Knights Defender turned vampire to police the paranormal creatures that walk the world. But would you know if your boyfriend was a vampire? Here’s a few mistake assumptions people make.
Vampires have pale skin
Think again.
When a Knights Defender rises as a Knights Vampire they regenerate any wounds and become the best version of themselves. Since some wee crusader knights, they come with a built-in suntan.
Vampires don’t have a reflection?
Wrong Again
Knights Vampire need to blend with humans. Someone would notice if they didn’t cast a reflection. When the Grand Master’s dark spell created them, he ensured mirrors reflected them.
Think vampires come with protruding canines?
Another myth bites the dust
A Knights Vampire fangs only drop when he’s about to drink blood. Any other time, even a dentist wouldn’t know they came with fangs.
Think vampires only drink blood?
That would be boring.
Knights Vampire come from the middle ages. Food was different and sometimes scarce back then. They love modern food, especially spices. Most enjoy fine wine, too.
Think all Knight’s Vampire are male?
This is more or less true, but some have found their true-mates. If their female truly loves them, the Knight keeps his immortality and gets his soul back when they bond. Most Knights Vampire have lost the ability to feel. To them the world is a cold place that only exists in shades of gray. Only their innate strength and courage keeps them from turning rogue. To reclaim their soul, a vampire must find their soul mate and bond with her. If their love isn’t strong enough, the woman walks away unscathed. The vampire goes straight to hell.

About One Knight Stand by Kryssie Fortune

Once a Knight Vampire soul bonds with his lady, she becomes immortal too.
Crusader knight, Blaxton de Ferrers rises as a vampire after the Knights Defender steal his soul. Murdered by his cousin, he preys on the people he once swore to protect. His emotions leach out of him. Gradually, he forgets how to feel.
Eight hundred years later, he meets Harriet.
Harriet Mortlake’s a strong, sassy woman who battles her weight and her temper. She’s the modern-day archivist in the castle which was Blaxton’s childhood home. She’s supposed to ferret out the castle’s secrets. Instead, she finds the love of her life.
When danger threatens Harriet, Blaxton steps in. Harriet and Blaxton are a match made in heaven. Except… he’s a vampire and he’s destined for hell.
Please Note – formerly sold as Knight’s Vampire
Amazon USA http://amzn.to/2pgAf24
Amazon UK http://amzn.to/2pnLBAe
Amazon Canada http://amzn.to/2FYZKhT
Amazon Australia http://amzn.to/2FSUUiV

Kryssie Fortune writes the sort of hot sexy books she loves to read. If she can sneak a dragon into her paranormal books she will. Her paranormal heroes are muscular werewolves, arrogant Fae or BDSM loving dragons.
Kryssie likes her contemporary heroes ex-military and dominant. Her heroines are kick ass females who can hold their own against whatever life – or Kryssie – throws at them.
Kryssie’s pet hates are unhappy endings, and a series that end on a cliff hanger.
Her books are all stand-alone even when part of series. Plot always comes before sex, but when her heroines and heroes get together, the sex is explosive and explicit. One review called it downright sensual.
Website http://kryssiefortune.wixsite.com/kryssie
Blog http://kryssiefortune.blogspot.co.uk/
Twitter https://twitter.com/KryssieFortune
Facebook https://www.facebook.com/KryssiesFortune
Pinterest http://bit.ly/1OGFnjc
Goodreads http://bit.ly/2kxqabJ
Amazon Author Page http://amzn.to/2hA0ZVO