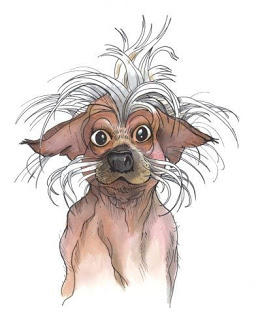 Three Cheers for Four-Legged Matchmakers…
or Why My Books Feature Canine Cupids
by Marcia James
February is all about romance, thanks to Valentine’s Day, but it’s also Responsible Pet Owner’s Month. So what better time to discuss Canine Cupids? Don’t you just love it when an animal character brings together the hero and heroine in a romance novel? I’m not talking about werewolves or other shape-shifters. Just every-day, garden-variety matchmaking cats and dogs. Of course, Smokey, my Chinese crested hairless dog mascot, would object to being called a garden-variety anything. He’s very proud of the fact that, in my books, he and his cousins continue to work their magic when it comes to introducing or reuniting soul mates.
Every novel or novella I write includes a Chinese crested hairless dog (or “crestie”), along with other pets. I especially love pairing a big Alpha hero with a tiny crestie sidekick. Sex & the Single Therapist (S&ST), the first in my “Dr. Ally Skye, Sex Therapist” comic romantic mystery series, features a crestie, two mellow cats, and a mixed-breed canine shedding machine named Marty, who plays an important role in the mystery plot.
Fictional heroes and heroines show their softer sides around their pets — a humanizing characterization device Hollywood scriptwriters call “petting the dog.” A fine example of this is the movie, As Good As It Gets, in which the curmudgeon (Jack Nicholson) falls for the little dog. In S&ST, the hero (Detective Zack Crawford) is gruff and all-business until we see him open his heart and his home to Marty. Like Marty, all of my fictional animal characters are homeless — rescued from the streets or adopted from shelters — and their owners spay or neuter them, as responsible pet owners should. 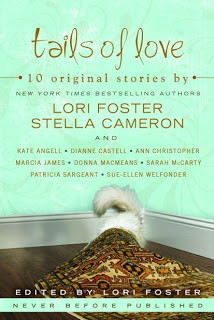 Animal adoption is such an important cause, especially when so many animals are homeless due to the economy and house foreclosures. In 2009, I contributed an animal-themed story, “Rescue Me,” to author Lori Foster’s benefit anthology, Tails of Love. So far, this book has raised over $10,000 for Animal Adoption Foundation (AAF), a no-kill animal shelter in Ohio. This popular anthology, which Berkley reissued in December 2011, offers ten romantic tales featuring four-legged matchmakers. The author advances and royalties for Lori’s as-yet-untitled, June 2012 benefit anthology will also support AAF.
In my Tails of Love story (and the majority of the others), the matchmaking four-legged characters don’t have their own POV (point-of-view). Readers don’t get to see what the animals are thinking; the POVs are saved for the two-legged characters. However, several of the stories do feature animals whose “internal dialogue” is on the page, bringing the reader into the animal’s POV. We can see why the dog or cat is doing what it’s doing.
From the anthology’s reviews and reader feedback, I learned that people either love or really dislike animal characters who have their own POVs. There doesn’t seem to be a middle ground. It’s an interesting phenomenon. Personally, I’ve always enjoyed mysteries and romances with thinking and sometimes talking animals. For example, quite a few cozy mysteries feature feline amateur sleuths, such as the “Midnight Louie” series by Carole Nelson Douglas. And I love Spencer Quinn’s “Chet & Bernie” mysteries, which are told 100% from the point-of-view of Chet, a very amusing canine detective.
Speaking of talking animals, one of my favorite funny YouTube videos features a chatty dog being teased by his owner. Here’s the link, if you’d like to check it out: http://www.youtube.com/watch?v=nGeKSiCQkPw
So, do you enjoy books, movies, or television shows with animal POVs? Do you like hearing Fido’s and Kitty’s thoughts? If you do, what books, etc do you recommend featuring animals’ internal dialogue?
I’ll pick several people randomly from the comments on today’s guest blog to receive a free e-book of my first comic romantic suspense, At Her Command — featuring none other than Smokey himself!
Happy Reading!
— Marcia James
– – –
Website: www.MarciaJames.net
Twitter: http://twitter.com/Marcia_James
Facebook page: https://www.facebook.com/MarciaJamesAuthor?ref=ts