Tag Archives: Wolf at the Door 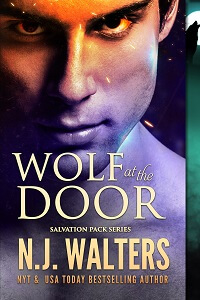 What starts out as a freelance article about werewolves turns deadly in NJ Walters’ paranormal romance, A Wolf at the Door. When real-life werewolf Jacque LaForge comes knocking, should Gwendolyn Jones run or let him in?

NJ, welcome to Romance Lives Forever. I’m Kayelle Allen, author and owner of this blog. Happy to have you here! Please tell us about your series.

Wolf at the Door in the Salvation Pack Series

Gwendolyn Jones is working on an article about werewolves, not that she believes they exist. But there are people out there who do, like the nervous man who slips her a flash drive with information he claims will prove to the word shifters are out there. Gwen starts questioning just what to believe when two very real werewolves come knocking on her cabin door later that night.

Someone has a flash drive with pictures that could endanger his pack, and alpha Jacque LaForge will do whatever it takes to destroy it. But the something deep inside him ignites when he knocks on the door of that “someone”. He didn’t think he’d find a mate, or that when he did, she’d be human. But now that he has Gwen in his arms found Gwen, he knows he has a fight on his hands to protect her from his former vengeful pack who are out to hurt him by any means necessary.

Wolf at the Door is the first book in the Salvation Pack series.

There are nine books in this series. It’s complete, although I have always toyed with doing an “next generation” spinoff.

There are nine books in total.

The original Salvation Pack consisted of five male werewolves—Jacque LaForge (alpha), Louis LaForge (Jacque’s brother), Armand LaForge (cousin of Jacque and Louis), Cole Blanchard, and Gator Rollins. These men broke away from their former pack to start their own. Any of them could be alphas of their own pack, but together they are unbeatable. It was only intended to be five books, but when I started writing their world expanded bringing in more characters, including the women they love.

This series is ultimately about love, loyalty, acceptance, and what it means to be a real family.

Each book in the Salvation Pack series is a standalone story that can be enjoyed out of order.
Series Order:
Book #1 Wolf at the Door
Book #2 Wolf in her Bed
Book #3 Wolf on the Run
Book #4 Wolf from the Past
Book #5 Wolf on the Hunt
Book #6 Wolf on a Mission
Book #7 Wolf in his Heart
Book #8 Wolf in her Soul
Book #9 Wolf of Her Own

The characters. I fell in love with the Salvation Pack. I hated for the series to end. It was like leaving behind a group of old and trusted friends.

I’ve written over 100 books over the past 16 years, so too many to lists. Some of my more popular paranormal series are: Forgotten Brotherhood, Hades’ Carnival, Blood of the Drakon, Legacy Series, Spells, Secrets & Seductions, and Dalakis Passion. I also have three sci-fi/futuristic series: Project Alpha trilogy, Marks Mercenaries, and Assassins of Gravas. Contemporary series: Jamesville, Summersville Secrets. The Tapestries series is straight up menage a trois/fantasy. And I have other single-title books, as well as stories in anthologies. I like to write in different genres, but I mostly write paranormal.

Where to buy Wolf at the Door

NJ Walters is a New York Times and USA Today bestselling author who has always been a voracious reader, and now she spends her days writing novels of her own. Vampires, werewolves, dragons, time-travelers, seductive handymen, and next-door neighbors with smoldering good looks–all vie for her attention. It’s a tough life, but someone’s got to live it.
Website http://www.njwalters.com
Blog http://njwalters.blogspot.com
Twitter https://twitter.com/njwaltersauthor
Facebook https://www.facebook.com/N.J.WaltersAuthor
Goodreads http://www.goodreads.com/NJWalters
BookBub https://www.bookbub.com/authors/n-j-walters
Amazon Author Page http://www.amazon.com/author/njwalters
Get to know NJ Walters better by signing up for their email newsletter.
http://eepurl.com/gdblg5