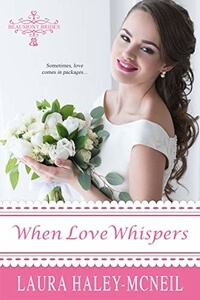 Laura Haley-McNeil, welcome to Romance Lives Forever. I’m Kayelle Allen, author and owner of this blog. Happy to have you here! We’re excited to find out more about your hero, but first, tell us about the book.

When Love Whispers by Laura Haley-McNeil

As the top ranked student at Charleston’s military academy, Preston Lowe excels in class, in sports and with women. Only Willow Dockery, a barmaid at the city’s trendy nightclub, sees the pain in his eyes when he’s out with friends having a good time. But Willow doesn’t know how Preston inwardly struggles to forget a past that could derail the career he’s worked hard to achieve.

Willow wrestles with her own secrets. After a disastrous relationship leaves her broke and disillusioned, she vows never to let anyone rob her of her dreams again. But as she gets to know Preston, it’s as if their tumultuous pasts meld together into something so startling it transforms their relationship and their lives forever.

Know the Hero from When Love Whispers

He loves to be comfortable, but as a military cadet, he wears the academy uniform during the day. After class, he can’t wait to dive into running shorts and a t-shirt. He’s a runner, and he’s running every free moment.

He isn’t accustomed to children, but there’s one baby he loves and wants to hold. He never thought he wanted a family. He’s determined to pursue his military career, but when he sees Willow holding her baby, the confusing surge of emotions make him wonder what he really wants.

He’s not a coffee drinker. Because he’s a runner, he drinks lots of water. Not that he likes water, but he needs to stay hydrated, even in a humid place like Charleston.

He has all the phone apps. One of his favorites is the food delivery service. When he’s studying, he’ll often miss meals. He has a senior project due and he’d rather work on that than eat. He’s an eat to live type of guy. Even though he’s a runner, he can’t resist a cheeseburger and fries. He also likes the flower order app. After all, what better way to make a new mother smile that order her a bouquet of two dozen red roses?

He has to be clean-shaven. At the academy, haircuts and shaving are part of a strict standard, but when he’s forced to spend a few weeks at Willow’s family’s farm, he relaxes from the academy’s strict code and enjoy a laxer standard.

He doesn’t care what he drives, but his mother, with her newfound wealth, greeted him Christmas morning with a new sports car. It’s a babe magnetic, which he’d appreciate if he had time for women, but he enrolled in the academy to pursue a military career and that’s his focus … for now.

Where to buy When Love Whispers

Laura Haley-McNeil is an award-winning author of romantic suspense and women’s fiction in novel length and in short stories. Her work has been featured in several women’s magazines. She has studied piano and ballet and has been a board member for two community orchestras. She and her husband reside in Colorado. When she isn’t writing, she jogs, bicycles and crochets.
Website http://laurahaleymcneil.com/
Blog http://laurahaleymcneil.com/
Twitter https://twitter.com/laurarmcneil
Facebook https://www.facebook.com/LauraHaleyMcNeil
Pinterest https://www.pinterest.com/lchm4115/magical-world-of-reading/
Goodreads https://www.goodreads.com/author/show/6470538.Laura_Haley_McNeil
Amazon Author Page https://www.amazon.com/Laura-Haley-McNeil/e/B008S3WD10/
Newsletter https://laurahaleymcneil.com/