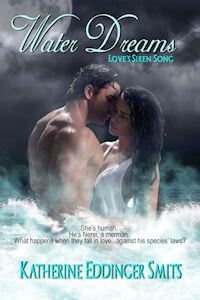 Katherine Eddinger Smits, welcome to Romance Lives Forever. I’m Kayelle Allen, author and owner of this blog. Happy to have you here! We support all furbabies, real life or fictional. We want to know all about your Fiction Furbaby, but first, please tell us about your book.

Genre Paranormal Romance
Book heat level (based on movie ratings): R
Nik–an outwardly normal young woman terrified by water, living in the Greek-American town of Tarpon Springs, Florida.
Bas–a shapeshifter merman tasked with obtaining Nik’s help to gain what his species most desires.
The Nerei–a race of beings who want humans to continue to believe they are mythological.
What happens when Nik refuses to help Bas and the Nerei?
How will Nik and Bas save each other when they fall in love, against his species laws?

Full name: Basileus Cantonous
Nickname: Bas
Gender: Male
Species: Nerei (Merman)
Physical description: Muscular, handsome, with pale skin, black eyes, black hair with jade colored highlights
Relationship to main character: Love interest
Relationship to the villain/antagonist: Son
Where this furbaby came from: He belongs to a race of descendants of two of the Greek Titians, Oceanus and Tethys. He and his people are similar to humans but evolved to live in the water. His clan originated in the sea near Greece, but most have relocated to the Gulf of Mexico and spend time on land in Tarpon Springs, Florida. They call themselves Nerei, which comes from the Greek word for Nereids, or water nymphs.
What inspired you to create this character?
When I decided to write my debut novel, I knew I wanted it to be in my favorite genre, paranormal romance. However, I wanted something different from werewolves and vampires. I like them, but I wanted to write about a new kind of shifter. I already knew the story would be set in my home town of Tarpon Springs, Florida, so I considered what kind of shape-shifter might live near there. It’s a small town on the west coast of Florida, known for its large Greek settlement and fishing. So, of course mermaids and mermen came to mind.
What does the main character think about this furbaby?
Nik, the main character, is a young woman of Greek heritage who is terrified of water. When Bas tells her he is a merman, she thinks he is crazy. She doesn’t want anything to do with him.
What does the villain/antagonist think about this furbaby?
The antagonist in this story is Mara, the clan matriarch and Bas’ mother. She has tasked him with enlisting Nik’s help. The Nerei’s greatest desire is to obtain independence from the water, so they can remain on land as long as they want. Mara loves Bas deeply, but is critical of him and not sure he takes his job seriously.
What does this furbaby eat?
When in the water, Nerei eat raw fish, which they catch by elongating their fingernails into claws and their teeth into razor sharp points. On land, they eat human food, though they have a preference for sushi and very rare meat.
What is this furbaby’s natural habitat?
Bas’ natural habitat is the water and the land. Because he can shapeshift to pass for human, he can keep his true nature a secret while enjoying all the land has to offer.
Please share an interesting fact or tidbit about this furbaby.
Bas was raised in a Nerei community and had little interaction with humans until he was appointed to contact Nik. His English is formal and he doesn’t use contractions. Also, he has no knowledge of popular culture so idioms and slang sometimes confuse him in amusing ways.
What triggers the shift from human to animal?
Nerei are in complete control of their shift. They can remain human in water or they can partially shift. They can also remain in Nerei form on land, but rarely do because they wouldn’t be able to walk and also because they don’t want humans to see them in their natural form.
How does the shifting process happen?
The Nerei make a mental decision to shift and the change is almost instantaneous.
How does the human character think and feel about the animal side?
The Nerei don’t consider themselves animals. They believe they are superior to humans and retain their enhanced strength, hearing and eyesight when in human form.
How does the animal character think and feel about the human side?
The Nerei still consider themselves Nerei even when in human form. There is not the dichotomy that is often found in shifters, since their brains and sense of self is the same in either form.
In what ways are the human and animal characters different in belief and needs?
The Nerei cannot remain on land more than a few hours without rejuvenating in the water. They become severely dehydrated and this process can be fatal. They can remain indefinitely in the water, but they do need to surface to breathe air occasionally. This is because they have dual respiratory systems that can be overwhelmed by prolonged immersion.
Is the shifting process part of a deeper, mystical process (i.e., moon phases, rituals, life events)?
No, but the Nerei have a complex society headed by the matriarch and clan elders, who are all female. Males are warriors, but have little political power. The clans don’t all get along and sometimes war with one another, but also make alliances that complicate everything. They are also polytheistic, worshipping the gods and goddesses of the Greek mythology.

Which, if any of the pets in your writing are modeled after your own pets? In what way?
My current pet is a 21 year old Irish Sport Horse, who has been with me since she was six. I don’t have any animals in Water Dreams, or my other published fiction, but my work in progress includes horses, a cat, and a dog. Those animals are modeled after ones we were privileged to share time with during their lives.
What do your pets do when you are writing?
Corrin Castle lives on a farm in Ocala, Florida. She thinks it belongs to her and must approve any additions to the herd. (Usually, the answer is no.)
What’s the most unusual pet you ever had?
When my kids were five and three, a cockatiel flew into our yard and perched on my daughter. “Mommy, can we keep him?” You know the rest. Crystal lived with us the rest of his life. He said a lot of words and loved to sit on your shoulder and rub his beak on your cheek.
Where did you find your pet?
My horse was imported from Ireland. I found her in Virginia.
What do you feed your pet?
Grain, hay and grass.
Describe a toy or favorite item your pet loves.
Cookies

Where to buy Water Dreams

Katherine Eddinger Smits has a BA in Psychology and Sociology from the University of South Florida and a Masters in Social Work from Florida State University. After over two decades of helping veterans, families and community agencies as a clinical social worker, she retired to pursue writing. She has published two paranormal romances, a third is scheduled for release March 2019, and several more are in the works.
She grew up in Tarpon Springs, Florida. Although not from a Greek background, she fell in love with the Greek culture of the town and its close-knit families. She moved away years ago, but she still visits Tarpon Springs frequently to see old friends and classmates, walk the beaches, or shop and eat at the Sponge Docks.
She started writing stories in grade school and always intended to write novels someday. However, she put off writing fiction while she raised her family and worked as a clinical social worker at four different Veterans Affairs Medical Centers around the country. Although she was devastated to learn that her first career choice—mermaid, was not realistic, Katherine found helping veterans and their families fulfilling, and managed to squeeze writing into her life. Whether it was writing clinical assessments, creating brochures for social programs, or putting together newsletters for clubs and organizations, she always had some kind of writing project in the works.
Katherine lives with her husband in Homosassa, Florida and Falling Waters, West Virginia. They have a daughter who resides in Alexandria, Virginia and a son, daughter-in-law and two
Website http://katherineeddingersmits.weebly.com/
Blog https://wordpress.com/read/feeds/67813081
Twitter https://twitter.com/katherinesmits
Facebook http://bit.ly/2fgU97w
Pinterest https://www.pinterest.com/katherinesmits/
Goodreads https://www.goodreads.com/author/show/15273608.Katherine_Eddinger_Smits
Amazon Author Page http://amzn.to/2fu91j3
Newsletter http://katherineeddingersmits.weebly.com/
Shout out to Rob’s Rescues – founded by a 9-year-old animal activist
Rob’s Rescues is a non-profit organization in Georgia helping people in need care for and feed their pets. It was founded in 2014 by a then nine-year-old boy. Rob’s Rescues is dedicated to collecting pet food for people in need to reduce shelter surrenders, and to advocating for the adoption of shelter pets. Rob writes monthly articles advocating for shelter animals in the Around About Local Media magazine publications. His column was first published in 2014. He also has pet food collection sites for people in need in the community and interviews amazing people. His interviews appear online once they are published in his column.
Rob volunteers for Pet Buddies Food Pantry, the Cherokee County Animal Shelter and Cobb County Animal Control and collects pet food for these organizations and the communities they serve. He also wants to bring attention to smaller, rural shelters. Mostly he wants to get kids to be Rob’s Rangers to teach kids that they can help shelter animals. Rob has also talked to kids in a classroom setting.
Rob’s Rescues is a Non-Profit Corporation and all donations are tax deductible.
Website http://www.robsrescues.com/
Facebook https://www.facebook.com/robsrescues/
Twitter https://twitter.com/RobsRescues
Shout out to Aftercare Charles Town, Equine Encore Performance
Aftercare Charles Town, Equine Encore Performance Is Dedicated To The Rehoming, Repurposing And Retirement Of Thoroughbred Race Horses That Have Raced And Trained At Hollywood Casino And Racetrack Located In Charles Town, Wv. https://www.facebook.com/EEPCT/