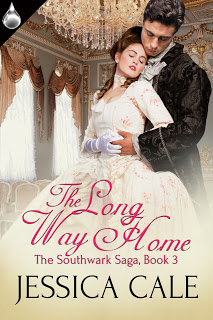 Meet Jack Sharpe from The Long Way Home by JessicaCale.

Jessica Cale is the award-winning author of the historical romance series, The Southwark Saga. Originally from Minnesota, she lived in Wales for several years where she earned a BA in History and an MFA in Creative Writing while climbing castles and photographing mines for history magazines. She kidnapped (“married”) her very own British prince (close enough) and is enjoying her happily ever after with him in North Carolina.

Title: The Long Way Home
Genre: Historical Romance
Book heat level (based on movie ratings G, PG, PG13, R): R
A paranoid king, a poison plot, and hideous shoes…it’s not easy being Cinderella.
After saving the life of the glamorous Marquise de Harfleur, painfully shy barmaid Alice Henshawe is employed as the lady’s companion and whisked away to Versailles. There, she catches King Louis’ eye and quickly becomes a court favorite as the muse for Charles Perrault’s Cinderella. The palace appears to be heaven itself, but there is danger hidden beneath the façade and Alice soon finds herself thrust into a world of intrigue, murder, and Satanism at the heart of the French court.
Having left his apprenticeship to serve King Charles as a spy, Jack Sharpe is given a mission that may just kill him. In the midst of the Franco-Dutch war, he is to investigate rumors of a poison plot by posing as a courtier, but he has a mission of his own. His childhood friend Alice Henshawe is missing and he will stop at nothing to see her safe. When he finds her in the company of the very people he is meant to be investigating, Jack begins to wonder if the sweet girl he grew up with has a dark side.
When a careless lie finds them accidentally married, Alice and Jack must rely on one another to survive the intrigues of the court. As old affection gives way to new passion, suspicion lingers. Can they trust each other, or is the real danger closer than they suspect?

Welcome to Romance Lives Forever! We’re happy to have you here today.
Name: Jack Sharpe
Age: 23
Gender: Male
Birthplace: Covent Garden, London
Profession: Officially a soldier, unofficially a spy.
Ethnicity/Species (if not human): English…probably.
Describe your body and build, skin tone, height and weight. Include any unique features such as dimples, freckles, or scars.
I’m tallish and gawky, with blue eyes and an abundance of curling black hair. I was a carpenter’s apprentice and I have little scars everywhere, but the biggest is a bullet hole beneath my left collarbone.
Who is the significant other in your life?
I would never presume to name her thus, though I suppose she is significant. I’ve always had a certain affection for Alice Henshawe. We grew up together, you see, and I seem to have inadvertently married her. You won’t hear a word of protest from me, but it was something of a surprise.
Please tell us a little about yourself.
What’s there to tell? My mother was an actress and I grew up a pickpocket in St. Giles before Mark Virtue took me on as an apprentice. An…incident…forced me to leave England at sixteen, and I’ve been with the army on the Continent ever since.
How do you dress?
By preference? I’ve been wearing the same patched clothes for years, but I’d be lost without my coat. My old master’s wife made it for me, and it’s full of secret pockets. It looks like any other coat when it’s on, but it’s filled with all the things I need to survive most any situation. Since I’ve arrived at Versailles, however, I’ve had to wear rather more silks than I’m comfortable with. My friend Achille is a Marquis, and he helps me to choose what to wear to court. I prefer darker colors, but If it were up to him, I’d be in lilac moire and violet hose.
If we could only hear your voice (but not see you) what characteristic would identify you?
I’ll be the one saying the wrong thing. When I’m nervous, I talk too much and too quickly, and I always sound like a right fool. Alice makes me very nervous. I wanted to tell her she looked lovely the other night, and ended up making some inane observation about her shoes. I’m hopeless.
On what special skills do you rely?
I’m quiet, I’m fast, and I’m good in dangerous situations. I can fight, spy, sew up wounds, start fires, and, should the need arise, I’m bloody good with a hammer. I can also make coffee. You’d be surprised how often that’s all you need.
Are any of your skills a source of pride or embarrassment, and if so, which ones and why?
I am very good with my hands. I can rob a man blind and be off with his pocket, his rings, and the buttons of his coat before he knows I’m there. This has been useful over the years, but it’s a source of embarrassment that I ever had to learn to do such a thing. I’m also not a bad actor. I drew up backstage in the theaters around Covent Garden and it comes naturally to me.
What kinds of things do you always carry (in pockets or purse)?
Three knives in my coat, two more in my boots. Two pistols, a spyglass, a map, enough money to get by or bribe a guard, half a dozen lock picks, a set of loaded dice given to me by the King of France, and a miniature portrait of a girl.
Do you see morality as black-and-white, or with shades of gray?
I see things as very black-and-white. That sounds mad coming from a pickpocket, doesn’t it? Truth is, the laws of man and real morality do not often match, and I live my life according to a very firm set of rules. No one I’ve met treats women with the reverence I do, but it isn’t at all moral the way they’re so often abused. Some might think I take my ideas of morality too far, but I’ve seen too much of the world to not follow ideas through to their logical conclusions.
If someone from your past showed up, who would you most want it to be, and why?
My sister, Joanna. Our mother sold her into service to the colonies when she was ten. Most don’t survive the crossing, let alone the work on the other side. She’d be seventeen now. I want to know if she’s alive, and I want to see her safe at home again.
What would you like to tell your writer?
I could have done without the cantarella, thanks! I’m very grateful to you for allowing me to find Alice, but was all that really necessary? I’ve never been so humiliated in my life for such a sustained period of time. Couldn’t there have been an easier–or less traumatic–way to get Alice to finally talk to me?