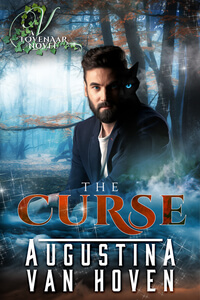 The hidden community is preparing for war in book two of Augustina Van Hoven’s paranormal romance, The Curse. Prince Laren needs to find a way to break his curse to help save the community.

Augustina, welcome to Romance Lives Forever. I’m Kayelle Allen, author and owner of this blog. Happy to have you here! We’re excited to find out more about your hero, but first, tell us about The Curse.

The Curse by Augustina Van Hoven

Prince Laren, a Tovenaar destined to be the ruler of his house, has only one goal. Break the spell that forces him to go catting around at night and unleash his wrath on the sorcerer responsible. Then he meets a woman with fiery hair, deep blue eyes, and the body of his dreams. She’s but a pawn in the looming conflict between members of the hidden community. And the prince is torn between his old and new desires.

Juliet Cooper’s plans were simple: sell her great uncle’s property, return home, find a job, and get on with life. But then she meets Laren—in both human and cat form. And her plans get complicated. Juliet finds she can’t leave until she knows the secrets that her great uncle’s property and the handsome, blue-eyed man are hiding, unaware of the price she might have to pay.

When Juliet is attacked by Laren’s opponents, he must decide whether to rescue her, risking not only the wrath of the community members who shelter him and his princely future, but also his life.

Know the Hero from The Curse

After dark he is stuck in cat form and his options are limited. He might chase small animals or try to hide from the shifter guards.

He loves breakfast food. He’d pick up some sort of breakfast sandwich.

He likes loose fitting clothes that he can easily get in and out of when the change comes over him.

When he can use his magic, he can fix pretty much anything.

He tried to see the woman he’s interested in while in cat form and got locked in her trailer.

He’s very kind. He considers children to be very precious and hopes to have his own some day.

He would be transforming from a cat into a man. The change is always painful and exhausting.

He’s cautious. Since his power is limited, he tries to act as human as possible.

Because of his curse there are a lot of times when he has no choice but to let someone else handle things.

He has one earring that he’s borrowed. It can hold extra energy for his magic.

He doesn’t know how to drive and his magic tends to short out modern electronic things. He does a lot of walking or riding in older vehicles.

He’d just toss something away.

Where to buy The Curse

Augustina Van Hoven was born in The Netherlands and currently resides in the Pacific Northwest with her husband, dog and two cats. She is an avid reader of romance, science fiction and fantasy. When she’s not writing she likes to work in her garden or in the winter months crochet and knit on her knitting machines.
Website https://augustinavanhoven.com/
Twitter https://twitter.com/augustinavhoven
Facebook https://www.facebook.com/Augustina-Van-Hoven/
Pinterest https://www.pinterest.co.uk/augustinavhoven/
BookBub https://www.bookbub.com/authors/augustina-van-hoven
Amazon Author Pagehttps://www.amazon.com/Augustina-Van-Hoven/e/B06Y3JKV7T/
Get to know Augustina Van Hoven better by signing up for an email newsletter https://augustinavanhoven.com/contest/