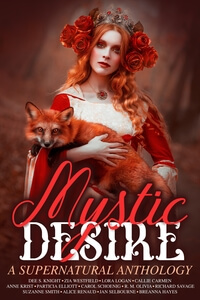 Welcome Remy from The Mortal Vampire in Mystic Desire, a new Paranormal Romance Anthology by Suzanne Smith and others.

Birthplace: Unknown, as he has amnesia. He was found bloodied and battered, barely alive in a California gold mine by his vampire maker Dr. Merlot.

Please provide a physical description of your character.

Well over 6′ tall, with flawlessly smooth, pale skin, wavy, jet black hair and dark, piercing eyes. Athletic build, pretty buff, for being a vampire and having only a liquid diet.

Please tell us a little about your character.

Remy is a bit cocky and conceited. He has no qualms about sucking the life out of humans, who he considers inferior, until he meets the innocent and beautiful mortal Angela.

Who is the significant other in your character’s life?

How does your hero dress?

Nice, but casual. Lived in jeans and silk jerseys, linen shirts. He doesn’t rely on his clothes to attract attention or make a statement. He is irresistible and he knows it.

What are the qualities of his voice?

Deep, rich, sexy. Saturated with testosterone. The kind of voice that hits you right in the groin area.

If you could only hear this character’s voice (but not see him) what characteristic would identify him?

Does he scrape by, live comfortably, live extravagantly?

He lives comfortably in a spacious condo on Lake Shore Drive in Chicago. He could live in a mansion if he wanted to as he has made profitable investments in property in Chicago’s prestigious Gold Coast area and is in fact quite wealthy.

Does he have children?

As a vampire, he doesn’t have children, but he feels a strong affection for kids. He has never been able to bring himself to harm a child. Unfortunately, everyone else is fair game.

What is your character’s biggest need at the beginning of the story?

Honestly, blood. He’s hungry. But when he meets Angela, that turns to lust, then, the need for intimacy.

How does your character handle challenges?

Well, because he is such a powerful vampire, the only person in his circle that presents a physical challenge is his maker, Dr. Merlot. It pisses Remy off a little bit to know that Merlot could best him in a fight. But, he has the good sense to avoid going toe to toe with Merlot. He is also faced with the personal challenge of not being able to consummate his love for Angela, which he deals with by sheepishly running away when they are on the verge of making love. He only leaves to protect her but she doesn’t know that, so he comes off as a bit of a jerk.

Who in his life has the power to hurt this character the most?

On an emotional level, the human he is in love with, Angela. On a physical level, his estranged vampire girlfriend Giselle.

He is afraid Angela might see him as unworthy or undeserving of love because of what he is. That wounds him deeply. Giselle has a jealous and vindictive nature and at one point in the story, she is much stronger than Remy.

Frankly, who better to write about? I’m eternally young, smart, beautiful, powerful. But even with all that going for me, I’m still flawed, which adds an extra layer of interest.

Was there anything your writer discovered about you that was a surprise to one or both of you?

Yes. When all the dust settled we both found out who I really was.

What other character from your book do you think your writer should write a book about?

Maybe my maker, Dr. Merlot. Care to tell us why? Because anyone that has been around for over one thousand years has a story to tell.

Is there anything you’d like to say to your writer?

My story is just beginning.

Tell us about The Mortal Vampire in Mystic Desire

Genre: Supernatural Romance
Book heat: R
Remy is far from your typical vampire, though he doesn’t know it until he meets the mortal Angela. Once their eyes lock, not only does he feel physical pain for the first time in his existence, but he also sees a vision of himself in another world, one that is both seductive and frightening. Because Angela’s influence is so strong, he begins to consider the possibility that perhaps she is more than human after all. He tries to convince himself that she is a witch, attempting to cast a spell on him. But he knows that this theory makes little sense because he is immune to what the witches call “glamouring”, seizing control of their unwitting victims mind. Still, as his attraction for Angela grows, he becomes weaker and weaker, until he is certain that true death is only hours away.
From witches and warlocks to ghosts, psychics and more, the Mystic Desire anthology by BVS has something for everyone.
Publisher https://blackvelvetseductions.com/
Amazon https://amzn.to/322Ziq3
Universal buy link: https://books2read.com/u/4j1AD2

Suzanne Smith grew up on the northwest side of Chicago. She attended Wells High School, then North Park College, where she graduated with a BA degree, majoring in psychology. Currently, she lives in River Grove, a small suburb outside of Chicago. Her days are spent managing a very busy dental office in Chicago’s Gold Coast area. Her nights are mostly quiet, spent in the company of her two rescue cats, Zilly and H.K. and her dog Sammy, with an occasional night out with friends. She recently started writing, as a hobby, but soon came to love the freedom that writing gave her, freedom to go to any place or time she wanted. Freedom to breathe life into her characters. Writing is now an obsession.
Twitter https://twitter.com/Suzanneromance
Facebook https://www.facebook.com/Suzanne-Smith-Dark-Romance-Author-145176809653851/
Pinterest https://www.pinterest.com/suzanne0006/
Goodreads https://www.goodreads.com/author/show/18267561.Suzanne_Smith
Amazon Author Page http://www.amazon.com/-/e/B07FN6CYTG