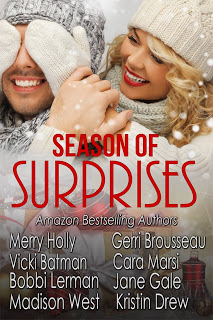 Award-winning
author, Vicki Batman, has sold many romantic comedy works to the True
magazines, several publishers, and most recently, two romantic comedy mysteries
to The Wild Rose Press. She is a member of Romance Writers of America,
Sisters in Crime, and several writing groups. An avid Jazzerciser. Handbag
lover. Mahjong player. Yoga practitioner. Movie fan. Book devourer.
Chocoaholic. Best Mom ever. And adores Handsome Hubby. Most days begin with her hands set to the
keyboard and thinking “What if??”

Why did you write
this book?
Last year, I was asked to participate in the Season of Magic
holiday anthology. It did really really well and when asked to participate
again, I said yes. But I wrote this particular story because of my love for
handbags, specifically Enid Collins bags. They are wonderful stenciled and
jeweled creations originally sold through Neiman Marcus. I love them. And
created my own brand with a design for this holiday story.
What is your favorite
genre to read?
I cut my teeth on mysteries like the Bobbsey Twins, Nancy
Drew and Trixie Belden; so I am a huge mystery fan. I also like contemporary
romance, especially with a touch of humor. And historical romances sweep me
away like a Calgon moment.
Who is your favorite
character from fiction (not including your own)?
I love wacky Stephanie Plum but mostly because Janet E.
writes stories with humor. When I finished my first one to read, Four to Score,
I fell in love with Janet E’s humor and said, “Finally.”
What are you working
on at the moment, and will see from you in coming months?
I’m doing edits on Temporarily Insane, a romantic comedy
mystery. AND yes, there will be another holiday anthology next year. Mine is
tentatively entitled The Littliest Angel. I have a great backstory to share. I
have a few more stories banked and I’m looking for a good spot for them.
Please tell us about
your latest book.
Season of
Surprises is a holiday anthology which features my romantic comedy short story,
“Holiday Handbag Extravaganza.” Here’s something to share about it: Christmas Countdown is on! Hunk-a-licious customer, Jack
Treadaway, pesters boutique owner, Callie Woods, to locate a vintage handbag
for his mother. Too bad the wedge between them is his sister, the meanest girl
in town.

Posted on  10/15/2015 by Kayelle Allen
From Kayelle Allen: This week on Romance Lives Forever I’m sharing
stories by authors who have faced cancer either in themselves, or a family member.
The importance of friends and family, and having a support system is vital. One
key to success is being able to ask for help — and then being willing to accept
it. It’s a lesson I’ve had in my own life during various times. I don’t accept help
well. It’s something I fight with all the time. I’d like to think “I’ve got
this” but sometimes I don’t have as good a grip as I thought I did. I have
a friend who’s dealing with cancer right now. A friend’s brother died from cancer
last year. Cancer affects all of us. I hope I’m even half as good a friend as those
you’ll read about in this series.
I’m presenting these posts as an opportunity for the authors
to share their real life stories, as well as their fictional ones. There’s a short
list of ways you can show your support at the end of each post.

To Do: Fight, by Vicki Batman

Most people know I refer to my husband
as Handsome. What some don’t know is eight years ago, he was diagnosed with throat
cancer.
He had a swollen lymph node that all
doctors thought was allergy or infection-related. The drugs and antibiotics prescribed
didn’t knock it out. He had a needle biopsy which came back clean. His ENT doctor
said she wanted to remove the lymph and when doing so, found the cancer in three
spots.
My son and I had been waiting for
the doc to tell us all was well with the surgery, but she took forever. When she
did say, she asked if we wanted to tell Handsome. I couldn’t. I couldn’t even speak
or hardly look at him. Waiting in the recovery room for her to discuss all was terribly
hard.
Handsome was shocked too, but he was
very determined. He said, “Something to check off my yellow pad: Fight Cancer.”
He showed none of the classic symptoms
that lead to throat/esophageal cancer. He smoked the rare cigar. Drank an occasional
vodka or wine. Worked out. Not overweight. Little family history. Yet, he had it.
And so the battle strategy was formed
with an oncology doc, an ENT specialist, and the head of radiology. We had our dates,
we had our plans, we were marching forward.
At first, I stuffed him with everything
imaginable, but mostly lots of cheese-related products, milkshakes, and pasta. He
eventually did lose 35 pounds because the radiation scarred his throat and swallowing
became difficult. He worked until fatigued, then worked at home. The only one who
cried was me when he shaved his head. Eight weeks later, the treatment was over.
And every subsequent test and examination has shown him to be clear.
I believe a combination of many things
helped him through: his faith, our hope, family and friends, the skill of the doctors.
And the determination to check off
his yellow pad: Fight Cancer.
—

Season of Surprises holiday stories full of wishes and kisses
from eight Amazon best-selling authors including
“Holiday Handbag Extravaganza” by Vicki Batman: Christmas
Countdown is on! Hunk-a-licious customer, Jack Treadaway, pesters boutique owner,
Callie Woods, to locate a vintage handbag for his mother. Too bad the wedge between
them is his sister, the meanest girl in town.
Find Season of Surprises at: https://www.facebook.com/ASeasonOfMagic?fref=ts/
Amazon: http://www.amazon.com/Season-Surprises-Holiday-Box-Set-ebook/dp/B014LZJRVM/ref=sr_1_1?ie=UTF8&qid=1441331771&sr=8-1&keywords=season+of+surprises
Barnes and Noble: http://www.barnesandnoble.com/w/season-of-surprises-holiday-box-set-merry-holly/1122604571?ean=2940152242966
Kobo: https://store.kobobooks.com/search?Query=season+of+surprises
iBooks: https://itunes.apple.com/us/book/id1034934609

Like some of her characters, award-winning author, Vicki Batman
has worked a wide variety of jobs including lifeguard, ride attendant at an amusement
park; a hardware store, department store, book store, antique store clerk; administrative
assistant in an international real estate firm; and a general “do anything
gal” at a financial services firm–the list is endless.
Writing for several years, she has completed three manuscripts,
written essays, and sold many short stories to True Love, True Romance, True Confessions,
Noble Romance Publishing, Long and Short Reviews, Museitup Publishing, and The Wild
Rose Press. She is a member of RWA and several writing groups and chapters. In 2004,
she joined DARA and has served in many capacities, including 2009 President. DARA
awarded her the Robin Teer Memorial Service Award in 2010.
Most days begin with her hands set to the keyboard and thinking
“What if?”

Ways you can show your support