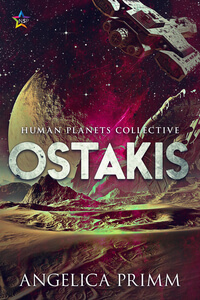 Angelica, welcome to Romance Lives Forever. I’m Kayelle Allen, author and owner of this blog. Happy to have you here! Please tell us about your book.

Genre M/M SciFi Romance
Book heat level (based on movie ratings): R
The Human Planets Collective sent young Ambassador Kaj Deder to the former colony planet Ostakis to establish relations. Without trade with the HPC, the dwindling resources of Ostakis will ultimately end human life on the planet. But his mission faces a huge obstacle in the form of Most Reverend Thyenn Sharr, the head of the Faith Progressive Church, who sees Kaj’s arrival as the beginning of the end of the Church. Kaj’s powerful attraction to Trademaster Klath’s son, Arlan does not smooth relations.
Arlan Klath, the son of the Trademaster of Ostakis, bears in his body the secret that the pious people of his planet want to hide. Born Cursed and inherently sinful, Arlan lives without legal rights or property. It enrages Thyenn Sharr Arlan’s father defiantly refuses to submit his son to a cruel act to “redeem” Arlan’s soul. The stakes ratchet when Arlan and Kaj form a relationship Thyenn Sharr considers ample justification to usurp the Trademaster position through the legal power of his Church.
Can Kaj navigate the treacherous currents of Ostakian politics and religion to save these human descendants of Earth? And must he chose between Arlan or his mission to do so?
What species/races of people are in your book?
Humans, the Ostakians, hybrids of human/aboriginal pairings, and the aboriginals who are called by the Ostakians The Old Ones, or the The Unspoken.
Do you have non-sentient creatures or animals in your story? If so, what are they?
Cullen. They are a native Ostakian specials similar to moths. The Ostakians and the Aboriginals use cullen cocoon silk for their clothing. Cullen can be invasive and dangerous to plant life (similar to Gypsy Moths) and the cullen silk industry is tightly regulated to prevent this. To reduce costs some merchants engage in black market trade of cullen silk produced by the aboriginals who live in the desert. Cullen are bioluminescent and the aboriginals use them to light their cave homes built into the thick shield wall between the desert and human habitation.

What languages are spoken in your story universe?
English and Ostakian.
If you created a language for the story, what is it called?
Ostakian.
Please give us a few words in this language and their translation.
In the culture of your story world, what is different from ours?
On Ostakis there is a third gender created by the permutation of mixing human and aboriginal genes. The aboriginals are hermaphrodites. The Ostakian humans still retain male and female sexes but also in a rarer frequency of births children are born with both male and female reproductive parts. They appear outwardly male but can gestate and bear young. These bi-gens who the Ostakians call Cursed also have regular heat cycles. When in heat they are irresistible to males, and this is the reason the Faith Progressive Church say “they lead men into sin.” A significant part of their culture is built around avoiding Cursed and the occasional for sin. For instance, each home with Cursed family members has a Sanctuary room that is air tight where the Cursed go during their heat cycles.
What special laws are important to your story world?
All are subject to the head of their Houses who are almost always male. This is an extremely patriarchal world where most women and the Cursed need permission for their activities. I say most, because one character Irdrana Vos is not married and the head of her own house, being the only one in it. She is the liaison between the protagonist and Ostakis, but she also does much behind the scenes to facilitate the goals of the Trademaster, Aulkus Klath, who wants to promote equality for both women and Cursed.
This culture values honor and honesty. It is acceptable to challenge an individual who questions a man’s honor or honesty to a duel. It doesn’t happen often
What challenges do your characters face (such as equality?)
Cursed, except in a few instances, are not allowed education or to work in public. Cursed are also subject to public Shamings which the Church promotes to “redeem” the souls of the Cursed, but are also used to garner money from Cursed families to ease the severity of the Shaming.
Women are similarly repressed but they do not suffer the physical Shamings of the Church. The Church regards marriage to women as the path to sanctify a man’s soul, which sound nice, but it is also meant to keep women in the the role “of the good woman,” who obeys her husband and Church.

Describe one of the worlds where your story takes place.
Ostakis is a planet that orbits a hot white sun and it’s gravity is a half gee greater than that of Earth’s. It’s year is also longer equaling 428 Earth days. It was barely habitable when scouted for terraforming by Earth 2500 years previous, though the scouting parties thought it could be made more habitable by terraforming it. It was a rush job for reasons that I haven’t explored yet. However, I suspect it’s because an Earth corporation was eager to get as many colony worlds under their umbrella as possible.
Ostakis at the time of the story only has seven city states and the population is declining. Unbeknownst to the Ostakians but known to the HPC, Ostakis doesn’t contain enough minerals to sustain human habitation. When the HPC found Ostakis they were surprised to find humans living there at all. It is only because of the colonists blending their DNA with the natives were they able to adapt to Ostakis. Otherwise the colony would have died out.
What makes this world unique?
The existence of the bi-gens. Despite how much society wants to deny them they do define the culture in many ways.
Tell us about the age of the culture in your story, i.e., are the people part of an ancient civilization, a newly formed group within an established culture, pioneer colonists, etc.
From Earth perspective 2500 hundred years has passed since it lost touch with Ostakis. From the Ostakian perspective it’s been 500 years since they settled the colony.
What food or drink is available to your characters?
Wine, though it is stronger than Earth wine. Ostakians eat meat though Kaj explains that most of Earth are vegetarians.
In what ways was it helpful to have a map (or sketch of one) for your story? (Provide a link to an image, if available)
I didn’t use a map.

What are the physical characteristics of the race/species of your main characters?
The Ostakians mostly look human though their body shape is subtly different. The men have wider hips than original human stock. Ostakian smiles are wider than an original human and their coloring can carry an orange cast to it. Their skin ranges from light brown to a dark, a “nut brown,” and their eyes are either gold, brown or black though there are a few blue-eyes Ostakians.
Ostakians have the natural reflexes of their aboriginal ancestors, and when started or upset can hiss in warning. The vocalization is considered gauche and not acceptable in polite society.
The aboriginals have dark skin, and hips a tad wider than their shoulders giving them a pear shaped body. Their eyes are gold and shine in the dark.
What physical differences exist in the way your characters communicate (i.e., telepathy, empathic abilities, etc.) with each other?
Both Ostakians and aboriginals communicate through the spoken word. Ostakians incorporated aboriginal words into their language and aboriginal inflections which includes clicks and whistles.
What differences, if any, exist in the way your characters reproduce?
As I said, the Cursed have heats, about twice a year, until they bear a child. Then the heats can slow down if the child lives and still suckles. However, because of their hybrid physiology and lack of proper medical care, pregnancy and birth is dangerous for the bi-gens. Only 25% of the pregnancies come to term and half of the Cursed die in childbirth. For instance, Arlan’s birthparent, Segun died trying to deliver his second child.
Are there more than two genders in your story world and if so, what are they?
As discussed.

Please give us three tips you find helpful when creating a story world:
Keep it real. Fantasy is great, but you risk losing the reader when something doesn’t ring true. Research the science concerning your world. For instance when researching what made sense for a world orbiting a white sun I had to push Ostakis to a further orbit giving it a longer year than Earth’s. I believe there were mathematical calculations involved. Two years later my head still hurts.
Keep your humans human but don’t make your aliens just a different human who wear funny mask. Aliens have a different culture and a different world view, and part of the fun in writing SciFi is writing that.
Keep track of the little things you incorporate in your story so you can reference it later. In my story workbook I keep a synopsis of each chapter and what I call a “plot hole tracker.” I list the bits that pop up and make sure I reference it at least one other time in the story. This helps to create the illusion of continuity in your world. For instance I mentioned cullen in an early chapter and then brought them in later when Arlan met the aboriginals. That’s when I learned they were bioluminescent. It added a deeper texture to my world than would otherwise exist.
When you researched for your story setting, what kinds of things did you learn?
Calculating Time Dilation. I still don’t think I got it right.
What things should writers avoid when building a science fiction world?
It isn’t what you should avoid. It’s what you should do. Remember to add the emotional reactions of your characters. Don’t think that because your character is outwardly invincible that they don’t feel fear. They do. It’s how they react to that fear that defines them as individuals.
Share a resource you found helpful when researching for your story.
The internet. What else?
What’s your advice for writers who want to create a solid background for their story world?
Did into your characters actions and motivations. People do things in response to one of two things. Either they are doing what their society says they should or they rebel against what society says they should. When you understand your characters you understand their world.

Born in a century far less progressive than how her brain is wired, Angelica engages in occupations considered less than reputable, one of them being a ghostwriter of erotic and romance fiction. Since time travel is not an option, in her off time she contents herself with writing about people and places in a far distant future with the twists that only come with traveling to the stars.
Angelica lives in Connecticut with an odd assortment of cats and humans and putters at hobbies ranging from art to bird watching when she’s not turning a phrase for her supper.
Blog http://missprimm.com
Twitter https://twitter.com/MissPrimmWriter
Facebook https://www.facebook.com/MissPrimmWriter/
Pinterest https://www.pinterest.com/angelicaprimm/
Goodreads https://www.goodreads.com/author/show/14241917.Angelica_Primm
Amazon Author Page https://amazon.com/author/angelicaprimm