Tag Archives: Only Ever You

Only Ever You by Olivia Night @ONightLikes2Wrt #RLFblog #NewRelease #RomanticSuspense 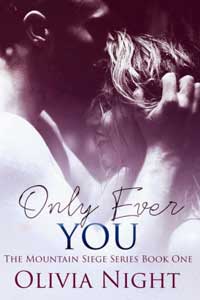 Olivia Night, welcome to Romance Lives Forever. I’m Kayelle Allen, author and owner of this blog. Happy to have you here! Please tell us about your book.

Only Ever You (Mountain Siege Series #1) by Olivia Night

Book heat level (based on movie ratings): R
Cooper and Emma are childhood sweethearts whose lives change irrevocably after a tragic car accident. The emotional fallout finds both of them distant and grieving, though no less in love with one another. In a perfect world they would have had the ability to work through this awful time in their lives together. But, instead, they go their separate ways. Neither expecting to find happiness without the other.
Four years later they find themselves thrown back together. Emma, a middle school English teacher is witness to a murder. Cooper, now detective with the Asheville PD, steps in to work on the case.
As the man, who committed the murder, sets Emma in his sights Cooper and Emma embark on a deeply emotional and difficult journey as they try to find their way back to each other.
But the murder is only the first wave of the coming tsunami. The man after Emma is part of an illegal organization, The Ridgeliners. The powerful group has swept through the South. Each city buckling under its pressure. With the Liners comes drugs, guns and prostitution. Now, they want Asheville.
Cooper must protect Emma, race against time to hold the Liners’s back from taking over his city and together they must face down their past and the demons that came in their wake.
Only Ever You is an exciting, devastating and emotional read.
Why did you write this book?
As I was cleaning one Saturday And So It Goes by Billy Joel came on my Pandora. The song made me pause and think about what it must be like to suffer real, deep loss. And from those thoughts Cooper and Emma emerged. I ended up writing the first thirty pages to their story that weekend. Apparently they had been waiting around for me to tell their tale.
What is your favorite genre to read?
Romantic suspense, of course!
Who is your favorite character from fiction (not including your own)?
Anne Shirley. I love her spunk, her ceaseless wonder of the world and her perspective.
What are you working on at the moment?
I am finishing up book four in this series and have also begun a third series that is Romantic suspense/military.
What books will we see from you in coming months?
You should look for books two, Love You Forever and book three, Their Only Choice over the summer and the final book in this series, First and Last will hit stores sometime in the fall.

Where to buy Only Ever You

Olivia Night, a fictional character herself, has always been an avid reader and writer. She found the romance genre in college and has never been able to get enough. One sleepless night, the main characters of Book One in her Men of FTI series sprang from her head fully formed. They demanded she tell their story; so she did. As they revealed themselves, so did two other intriguing characters. Those characters convinced her to give them their own books because their stories were worth telling too. And so Olivia suddenly became a romance author. When Olivia is not writing, she has the best job in the world, which, too, will remain a secret. In her free time, she reads, write, drinks wine, or is, most likely, out emulating Buffy the Vampire Slayer. Olivia lives in one of the most diverse and vibrant cities in the U.S.—Baltimore. She lives with her cat, which she is convinced was a gladiator in his past life. Olivia plans to continue being awesome at this thing called life. Really, that’s her only goal.
Website http://olivianight.weebly.com/
Blog http://olivianight.weebly.com/the-musings-of-many
Twitter https://twitter.com/ONightLikes2Wrt
Facebook https://www.facebook.com/olivianightauthor/
Tumblr https://www.tumblr.com/blog/olivianightlikestowrite
Instagram https://www.instagram.com/olivianightauthor/
Goodreads https://www.goodreads.com/author/show/14224593.Olivia_Night
Newsletter http://olivianight.weebly.com/travel-with-passion.html