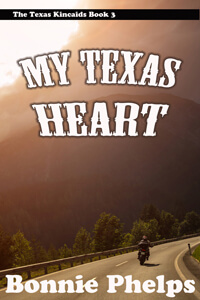 Bonnie Phelps, welcome to Romance Lives Forever. I’m Kayelle Allen, author and owner of this blog. Happy to have you here! Please tell us about your book.

My Texas Heart: The Texas Kincaids #3 by Bonnie Phelps

Genre: Contemporary Romance
Book heat level (based on movie ratings): R
Divorced from one woman who put her career ahead of everything – including their young son, Chad – Josh Kincaid isn’t about to make that same mistake twice. If he ever falls in love again, it’s going to be with a woman who puts family first. Chad is the most important thing in Josh’s life and he’ll do whatever it takes to be an active part of his life. But his ex has other plans and painfully shy Josh has to step up and fight for his son.
Feisty and driven, Fiona Reilly has plans. She left home to break away from the expectations that she marry and stay home to raise a passel of children. Nothing wrong with that life – it’s just not for her. Instead, she’s going to make something of herself and build a business to be reckoned with. In no hurry to fall in love, Josh and his adorable son capture her heart, forcing her to choose between her dreams and building the home she didn’t know she wanted.
Love has a way of messing up even the best of intentions…
Why did you write this book?
My Texas Heart is the third book in The Texas Kincaids series. Josh is the youngest of the brothers and has always felt like the odd man out. Quiet, nerdy, and shy he didn’t occupy the same universe as his oldest brother – a large animal vet – and his middle brother – a national team roping rodeo champion. I wanted to explore how his shyness and introversion impacted his fight to protect his son when he knew the boy’s well-being was threatened by his ex-wife. I also wanted to introduce him to a soulmate who could help him break out of his shell. Feisty and driven Fiona was the perfect woman for the job but she also had her own demons to slay. Sometimes life is about finding the dream you didn’t know you wanted.
What is your favorite genre to read?
I read mostly romance – contemporary, suspense, and historical – because I’m fascinated watching the dance two people go through as they build to their personal happily ever after. We all come with baggage and it is how we shift it around to make room for another person in our life. Romance aside, I love any book with a strong story and well-developed characters so also read mysteries, thrillers, political dramas, and historical fiction – especially about world war II.
Who is your favorite character from fiction (not including your own)?
Stephanie Plum (from a series of books by Janet Evanovich). Stephanie makes me laugh with all the crazy messes she gets herself in to. She wears her foibles and insecurities on her sleeve. She can visualize herself as a badass bounty hunter yet usually trips walking across the grass. I know I’m a woman who leads a quiet life but I secretly fantasize about being the badass who comes to the rescue.
What are you working on at the moment?
I had thought that I would end The Texas Kincaids series with Josh’s book but a storyline for Crystal – one of their cousins who has a minor role in the other books – grabbed hold and wouldn’t let go. In my work in progress Crystal’s being stalked by by a guy she dated a few times when her childhood crush, and one of Josh’s best friends, returns to town as a wounded Army veteran.
What books will we see from you in coming months?
My Army Ranger – a novella that I think will be the last book in The Texas Kincaids series – is due out in December 2018.

Where to buy My Texas Heart: The Texas Kincaids #3

Rumor has it that Bonnie began telling stories at a very early age. Photos exist of the author toddling around the corner of the house covered in mud babbling about magic rabbits leading her through the garden. Her parents were amused – until they discovered she had also walked across the newly poured cement patio – which only added fuel to the fire of her passion for writing. From then on, her active imagination continued to churn out plots and character sketches always wondering how different people would behave in similar situations.
Bonnie used her writing skills throughout her professional life as a fundraiser and marketer for several nonprofits. She enjoyed the chance to tell and share the story of worthy organizations. In the late 1980s, Bonnie authored a syndicated column in several California newspapers in which she shared the experiences and misadventures of life as a wife and mother. The jury is out on whether or not her children always appreciated her candor. Because Bonnie has romance in her soul, she also worked as a Wedding Planner for several years. Absolutely loved it!! She craves anything sweet, revels in any chance to travel, and is addicted to tracing her family’s roots. A native Californian, the author lives in Northern California with her husband.
Website https://www.bonniephelpsauthor.com/
Blog https://bonniephelpsauthor.blogspot.com/
Twitter https://twitter.com/bonniephelps15
Facebook https://www.facebook.com/bonniephelpsauthor/
Pinterest https://www.pinterest.com/bonniephelps15/
Goodreads https://www.goodreads.com/author/show/7238451.Bonnie_Phelps
Amazon Author Page http://www.amazon.com/-/e/B00MSCAR8I
Newsletter http://eepurl.com/cEOKgz