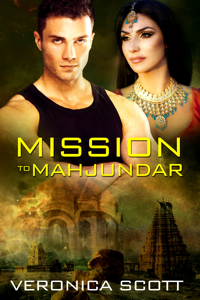 Today’s featured book is Mission to Mahjundar by Veronica Scott. Tell us about your story. We’ll have other questions in a moment.

An attempted assassination left Princess Shalira blind as a child and, now that she’s of marriageable age, her prospects are not good because of her disability. She’s resigned herself to an arranged marriage rather than face life under the thumb of her cold stepmother. But then she meets Mike Varone, a Sectors Special Forces officer sent to Mahjundar by the intergalactic government to retrieve a ship lost in her planet’s mountains. After Mike saves Shalira from another assassination attempt, she arranges for him to escort her across the planet to her future husband. She’s already falling hard for the deadly offworlder and knows she should deny herself the temptation he represents, but taking Mike along to protect her is the only way she’ll live long enough to escape her ruthless stepmother.

Mike, for his part, resists his growing attraction to the princess; he has a mission on this planet and rescuing the vulnerable but brave princess isn’t it. No matter how much he wishes it could be.

But what should have been an easy trek through Mahjundar’s peaceful lands swiftly turns into an ambush with danger around every turn. Shalira’s marriage begins to seem less like an arranged union and more like yet another planned assassination. The more they work together to survive, the harder it becomes to stop themselves from falling in love. Caught in a race against time, can they escape the hostile forces hunting them and make it off the planet?

What species/races of people are in your book?

Humans descended from Terran colonists and the local population of the planet, who are humanoid.

Do you have non-sentient creatures or animals in your story? If so, what are they?

The legendary ‘cherindor’, which are sacred to the royal family of the planet. They are represented as huge winged felines with barbed tails and three eyes.

What languages are spoken in your story universe?

My characters primarily speak the interstellar common language Basic, but people around them speak Mahjundan and other local languages. My military Special Forces hero from the Sectors has been hypnotrained in the primary language before the mission began. He has a guide assigned to assist him with the more regional dialects.

What special laws are important to your story world?

Since the planet isn’t as technologically advanced as many in the Sectors, the hero isn’t supposed to be using ‘modern’ weapons, but he’s brought some on the job anyway. Never be without your trusty blaster in a scifi romance! The heroine, Princess Shalira, has been promised in marriage by her father the emperor, to a feudal warlord as part of a treaty. Part of the plot hinges on the necessity for her to undergo certain rituals and recover tribal clan insignia from her late mother’s tomb. Mike, the hero, gets drawn into this journey and becomes quite enmeshed in the mysticism and magic of the planet while trying to protect her and accomplish his own mission.

What rights (such as equality) are challenges for your characters?

Shalira was left blind as a result of the assassination attempt on her as a child, so she deals with that every day. She is less respected by her people, because she isn’t a ‘perfect’ imperial princess. Ironically one of the fierce indigenous peoples they encounter on the journey view her blindness as making her a perfect messenger to and from their gods. The high priests in the mountain city fight over her, while planning to kill Mike as a sacrifice to their cruel gods.

What makes this world unique?

The old gods are fading away on Mahjundar as people turn to worshipping newer deities, but the primitive pantheon still wields power. Shalira is one of the people able to draw on that power, which makes her vulnerable to a number of scheming factions.

Tell us about the age of the culture in your story, i.e., are the people part of an ancient civilization, a newly formed group within an established culture, pioneer colonists, etc

.In the Sectors, one of my world building tenets is that many worlds have been found to have similar species, and human or humanlike races. I leave open to speculation the root cause as to why that should be. Ancient visitors? Or? Mahjundar is the same, with its own unique flora and fauna as well.

What food or drink is available to your characters?

While on the planet Mike eats the same diet as the locals, and has had injects against any toxins that might affect a Terran-descent human. I’d say the main thing everyone has to watch out for is the local black wine, which is highly intoxicating!

In what ways was it helpful to have a map (or sketch of one) for your story? (Provide a link to an image, if available)

I don’t typically do a map or a sketch for my books. I hold the information in my head. My only exception to date has been when I write stories set on large spaceships, where I have drawn a rough model and identified which decks hold what.

What’s your advice for writers who want to create a solid background for their story world?

Make it interesting, be consistent in your details and let your imagination soar. That’s the best part about science fiction – you can establish literally any setting for your story.

You’ve posed a number of detailed questions on language, culture, world building, research, etc., which I’ve chosen not to address today because my primary emphasis in any of my novels is the characters, the romance, the action and the adventure. Long ago I established my overarching framework for the Sectors, which is my interstellar civilization. I do of course develop details for whatever planet the particular story is taking place on, but not to the depth your excellent questions were attempting to measure. As I write each novel I may do research on isolated facets of the particular story – for Mahjundar I spent a lot of time reading up on various causes of blindness, for example, but I also drew heavily on my personal experience with a close friend from college who was blind. I had previously done much research on the Aztecs and the Mayans, aspects of which I applied to some of the indigenous societies my characters encountered. The character Tlazomiccuhtli, the ancient and blood thirsty god worshipped by one tribe on this planet, is based in part on my own encounter with a truly horrific Aztec deity (in statue form luckily) in a Mexico City museum years ago.

Google and Wikipedia are an author’s friends when doing research, as places to start at any rate, and identify other sources to dive more deeply into as needed. (I do have a huge personal library of scholarly tomes to consult for the research that goes into my ancient Egyptian paranormal romances.)

But to a large extent, the conditions encountered on any planet in my scifi universe derive from my own imagination and will only be as detailed and pervasive as the story I’m trying to tell demands. So some of the books may have a lot of planet-specific worldbuilding development – Escape from Zulaire for example – and others quite a bit less.

Best Selling Science Fiction, Fantasy and Paranormal Romance author, as well as the “SciFi Encounters” columnist for the USA Today Happy Ever After blog, Veronica Scott grew up in a house with a library as its heart. Dad loved science fiction, Mom loved ancient history and Veronica thought there needed to be more romance in everything. When she ran out of books to read, she started writing her own stories.

Seven time winner of the SFR Galaxy Award, as well as a National Excellence in Romance Fiction Award, Veronica is also the proud recipient of a NASA Exceptional Service Medal relating to her former day job, not her romances! She recently was honored to read the part of Star Trek Crew Member in the audiobook production of Harlan Ellison’s “The City On the Edge of Forever.”
Blog: https://veronicascott.wordpress.com/
Twitter: https://twitter.com/vscotttheauthor
Facebook: https://www.facebook.com/pages/Veronica-Scott/177217415659637?ref=hl
Goodreads: https://www.goodreads.com/author/show/5428500.Veronica_Scott
Amazon Author Page: http://www.amazon.com/Veronica-Scott/e/B006CUCJ92/
Newsletter : http://wordpress.us7.list-manage1.com/subscribe?u=2a337b96e2ee1ee1250004b9d&id=7462393c9e