Posted on  07/01/2015 by Kayelle Allen
Last month, Romance Lives Forever had 29 posts in a 30 day month.
Each month, the RLF Gems post ranks in the top ten, but is not counted, in order
to focus on guests.
The Top Blogger for June was Mae Claire. She wins a month of
free cover advertising on the blog. Our Top Blogger of the Year is publisher Liquid
Silver Books, which won a year of free advertising.

Because the person who gets the most comments in a month is not always the
person who gets the most page views per month, I instituted the Top Chatter Award.
This is the award for the person who receives the most comments. It goes to the
top three people in that category. To win, a guest must have five or more comments
(not counting the guest author’s).
1. Mae Clair
2. Donna Cummings
3. Annette Mardis
Romance Lives Forever features authors and new books. It has
a blogger’s FAQ page with a downloadable guide and six optional interviews. Readers
can follow via Google+, Networked Blogs, Linky Followers, email, an RSS feed, and
there’s a blog button readers and authors can grab. Authors can share previous books.
The blog uses author or publisher names as tags on posts, and author Twitter handles
in the titles. The site is broadcast over Triberr with a potential reach of over
1.2M readers via its Twitter-linked network. Twitter mentions are also gathered
in several Paper.li ezines, giving the author additional opportunities for promotion.
The Romance Lives
Forever Paper.li ezine features only guest authors, and the day’s guest is on
its front page every day.
New for 2015
Each post will be featured on the Romance Lives Forever Pinterest
board within a few days after it goes live. https://www.pinterest.com/kayelleallen/romance-lives-forever-rlfblog/

Myth and Magic a new #mystery by @maeclair1 #RLFblog 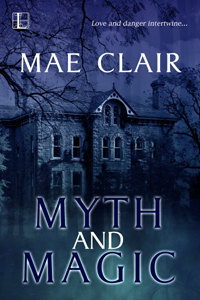 Mae Clair opened a Pandora’s Box of
characters when she was a child and never looked back.  Her father, an artist
who tinkered with writing, encouraged her to create make-believe worlds by
spinning tales of far-off places on summer nights beneath the stars.
Mae loves creating character-driven
fiction in settings that vary from contemporary to mythical. Wherever her pen
takes her, she flavors her stories with mystery and romance. Married to her
high school sweetheart, she lives in Pennsylvania and is passionate about
cryptozoology, old photographs, a good Maine lobster tail and cats.

Why did you write
this book?
I love mysteries and “what ifs.” When
I was a kid, there was a house in our neighborhood that everyone said was
haunted. There were always whispers of strange things going on there, and we
(the kids) invented stories to feed those rumors. With Myth and Magic I wanted to capture the same feeling I had as a kid
when I wondered if there really were ghosts in the house.
I also wanted to write a book that
included a lavish Halloween party. J
Even though the novel is releasing
now, during the summer, the story is set in the month of October and features a
strong Halloween theme. I always wanted to write a tale centered on that
holiday and spin a romantic tale from it.
What is your favorite
genre to read?
I love thrillers that employ mystery and suspense. I also
enjoy gothic romances with mystery. Usually any type of mystery will suck me
into the story, and if the book happens to include a dashing or enigmatic hero,
so much the better! J
Who is your favorite
character from fiction (not including your own)?
That’s a toss-up between Aloysius Pendergast, a highly
enigmatic Special Agent with the FBI who appears in a series of novels created
by the author team of Douglas Preston and Lincoln Child, and Gerald Tarrant, a
courtly yet lethal undead sorcerer from the Coldfire Trilogy by C. S. Friedman.
I love both characters so much I’ve read different books from each series
multiple times.
What are you working
on at the moment, and will see from you in coming months?
My
next release, FOOD FOR POE, should be out this November. It’s a Christmas
novella/paranormal romance.
After
that I’ll be releasing A THOUSAND YESTERYEARS, book 1 in a three book series
with a light romantic plot in each. The novels are set in 1982 and reference
events involving UFOs, Men-in-Black and a creature called the Mothman. Each
book has a standalone plot, the first book being a murder mystery.
Please tell us about
your latest book.
AS CHILDREN THEY PLAYED GAMES OF MYTH AND MAGIC…
Veronica Kent fell in love with Caith Breckwood when they were children. As a teenager, she was certain he was the man she was destined to marry. But a traumatic event from Caith’s past led him to fear a future together. He left Veronica, hoping to save her from a terrible fate. Twelve years later, Caith, now a P.I., is hired to investigate bizarre incidents at the secluded retreat Veronica manages. Returning to his hometown, Caith is forced to face his nightmares—and his feelings for the woman he’s always loved.
THEN ONE DAY THE MONSTERS BECAME REAL.
After the callous way Caith broke her heart, Veronica isn’t thrilled to see him again. But strange occurrences have taken a dangerous toll on business at Stone Willow Lodge. Forced to work together, Veronica discovers it isn’t ghostly apparitions that frighten her, but her passion for a man she has never forgotten. Or forgiven. Can two people with a tarnished past unearth a magical future? 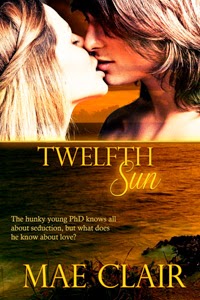 Welcome to Romance Lives Forever, Mae Clair. Let’s talk about your book, Twelfth Sun. Tell us about the superstitions on which you based the concept of the story.
Whether it’s ghost ships, sea lore, or whispered tales of phantom winds and water sprites, I’ve always been
intrigued by the murky depths of the sea. From ancient times to present, the underwater
world has harbored creatures serene and foul.
But what of the brave men and women who attempt to tame the sea or exist within its dominion? Even today,
sailors are a superstitious lot, many of their beliefs retained from an earlier
age when water haunts and sea serpents were commonly recognized and feared.
While writing Twelfth Sun, a novel which centers around the treasure hunt for a maritime artifact, I had
the occasion to sort through a host of nautical superstitions. I reference a few in the book, but much of the research I did was strictly for fun.
Here are some of my favorites:

If you enjoyed these, I invite you to read my romantic mystery, Twelfth Sun, involving an older woman and younger man caught up in a scavenger hunt staged by a reclusive billionaire at a lavish seaside mansion:

Reagan Cassidy is settled in her life. She has a thriving interior design firm, an upscale condo, two cats, and a goldfish. As a favor to her uncle, she agrees to team up with his marine archeologist friend to validate and retrieve a nineteenth-century journal, reputedly that of a passenger aboard the doomed schooner Twelfth Sun. Finding a hunky twenty-five-year-old coming out of the shower in her hotel room wasn’t part of the deal, but it’s hard to complain…

Dr. Elijah Cross is cocky and he knows it. He enjoys trading barbs with the lovely Reagan. Barbs, and some innuendo. He can tell she’d rather get back home to her business than stick around for the extended treasure hunt they’ve been talked into, but he’s fine with the situation. At least, until the “clues” start getting personal.

Reagan finds Dr. Gorgeous is as skilled in matters of the heart as he is behind the lectern. Throw in a series of clues which mean more to Elijah than he’ll explain, several odd-ball competitors out to win the journal, a saboteur, and a lavish seaside mansion, and Reagan has enough trouble keeping her head straight, let alone her heart.

Mae Clair opened a Pandora’s Box of characters when she was a
child and never looked back. Her father, an artist
who tinkered with writing, encouraged her to create make-believe worlds by spinning
tales of far-off places on summer nights beneath the stars. She snagged the tail
of a comet, hitched a ride, and discovered her writer’s Muse on the journey.Mae loves creating character-driven fiction in settings that
vary from contemporary to mythical. Wherever her pen takes her, she flavors her
stories with conflict, romance and elements of mystery. Married to her high school
sweetheart, she lives in Pennsylvania and is passionate
about writing, old photographs, a good Maine
lobster tail and cats.Mae is also the author of the time travel / paranormal novel,
Weathering Rock.