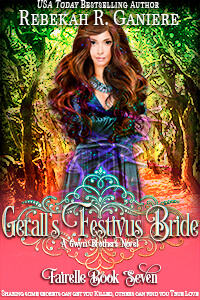 Trees form a tunnel near to Palsjo Castle in Helsingborg, Sweden.

Rebekah R Ganiere, welcome to Romance Lives Forever. I’m Kayelle Allen, author and owner of this blog. Happy to have you here! Please tell us about your book.

Not all nice guys finish last.

Gerall Gwyn has always been the kindest and gentlest Gwyn brother. Happy to take a backseat to his older and younger brothers boisterous personalities he’s content in the role of peacemaking diplomat. But when his family and their position as Lords of Westfall are threatened, Gerall is first in line to protect those he loves.

Eloa Lenter harbors a deadly secret. After two thugs almost kill her father, forcing him to go into hiding, she takes over the family business of running the Westfall bakery. In an effort to do more than simply scrape by, she uses every talent in her arsenal to make her pastries the best anyone has ever tasted- including using magick.

When Gerall meets the sweet and beautiful Eloa he knows that she’s the one he wants as his wife, but first he must get her to let him in. And when he discovers that some local thugs are extorting both her and other shop owners in town, he is determined to end the thefts.

But protecting Eloa as well as his family could cost both Gerall, and his brothers, more than just their stewardship over Westfall. It could cost them their lives.

Gerall’s Festivus Bride is the seventh book in my Fairelle Series of Fairytale Retellings. The second book in the series is Snow the Vampire Slayer and she has 7 brothers. Each of her brothers is getting their own book. 2 are already in the series and this is the third. I wrote Gerall’s next because I love him as a character. He is gentle and loyal and smart. On the quiet side, but first in line to defend the right and stick up for the little guy.

That’s a tough one because there are so many. Tanis and Tasslehoff from DragonLance. Jack from Pillars of the Earth. Loki and Hulk from the comics. Scarlet Witch.

I have 3 books in my dystopian Vampire series that I am finishing up edits on to release in the next month. I am also working on the next Fairelle book as well as a Contemporary Christmas Romance.

Where to buy Gerall’s Festivus Bride