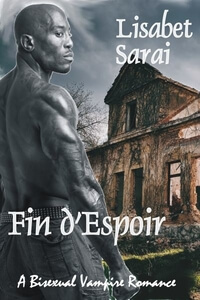 A former slave turned vampire by his cruel mistress struggles against his nature in Lisabet Sarai’s new paranormal romance, Fin d’Espoir. Etienne de Rémorcy has vowed to never again taste human blood, but he cannot resist the young couple who offer not only their bodies but also their hearts.

Lisabet, welcome to Romance Lives Forever. I’m Kayelle Allen, author and owner of this blog. Happy to have you here! Please tell us about Fin d’Espoir.

Bitter and alone, Etienne de Rémorcy haunts the forest around the ruined plantation of Fin d’Espoir. He has sworn to never again taste human blood. Then a fierce storm and a runaway horse bring a slender, raven-haired beauty to his lair. When she begs him to take her, he cannot resist.

Madeleine and Troy hope that a carefree vacation in tropical Jamaica will reignite their faded passion. On a mountain trail ride, Maddy’s horse bolts, carrying her deep into the jungle. Injured and lost, she is saved by a giant of a man whose mere presence kindles unbearable desire. By the time she understands his dark nature, it is far too late for her to escape.

When Maddy returns, Troy finds her greatly changed : ravenous in bed, restless and disturbed otherwise. The elegant stranger he meets on the beach holds the key to her transformation – and soon has seduced Troy as well.

Tortured by his conscience, Etienne is determined to set the young couple free. But their love may be his last hope for redemption.

Fin d’Espoir was inspired by a trip I took to Jamaica, many years ago. On one tour, we visited a ruined plantation buried deep in the jungle. The brooding atmosphere of the place made a deep impression on me. When I decided I wanted to write a vampire character distinctly different from the typical Caucasian, Dracula-inspired blood drinker, that experience came back to me. The book includes other scenes from that journey as well, including a midnight swim in the lava-rock grottoes of Negril.

I read a wide variety of genres, so it’s quite difficult to pick just one. However, if you force me to do so, I think I’d select science fiction. I’ve been reading scifi since I learned how to make out the words on the page, starting with the Mushroom Planet books, moving on to Heinlein and Bradbury, branching out to Philip K. Dick, Neal Stephenson, Octavia Butler, Sherri Tepper, and more. The explosion of books by indie authors offers a wealth of new and exciting choices in the genre.

That’s another tough question! I don’t think I can provide an absolute answer, since I’m very influenced by what I’ve read lately. One character who comes to mind is Miss Alexia Tarabotti from Gail Carriger’s Parasol Protectorate series. I tend to like female characters with strong opinions who aren’t afraid to speak their minds.

I’d like to bring out a sequel to my MM science fiction romance The H-Gene, which was released a few months ago. It’s the first book in a series called After the Plague. I also plan a mature romance for the holidays, possibly reprising the 60+-aged characters from Gray Christmas.

Where to buy Fin d’Espoir