Posted on  05/01/2015 by Kayelle Allen
Last month, Romance Lives Forever had 30 posts in a 30 day month.
Each month, the RLF Gems post ranks in the top ten, but is not counted, in order
to focus on guests.
The Top Blogger for April was Collette Cameron. She wins a month of free cover advertising on the blog.
Our Top Blogger of the Year is publisher Liquid Silver Books, which won a year of
free advertising.

(judged by page views). Congratulations to each one!
1. Collette Cameron
2. Allie Ritch
3. Tess Delacour
4. Marianne Rice
5. Susan Behon
Honorable mention: Jessica Cale, Elle Rush
Romance Lives Forever features authors and new books. It has
a blogger’s FAQ page with a downloadable guide and six optional interviews. Readers
can follow via Google+, Networked Blogs, Linky Followers, email, an RSS feed, and
there’s a blog button readers and authors can grab. Authors can share previous books.
The blog uses author or publisher names as tags on posts, and author Twitter handles
in the titles. The site is broadcast over Triberr with a potential reach of over
1.2M readers via its Twitter-linked network. Twitter mentions are also gathered
in several Paper.li ezines, giving the author additional opportunities for promotion.
The Romance Lives
Forever Paper.li ezine features only guest authors, and the day’s guest is on
its front page every day.
New for 2015
Each post will be featured on the Romance Lives Forever Pinterest
board within a few days after it goes live. https://www.pinterest.com/kayelleallen/romance-lives-forever-rlfblog/

Author Nicole Morgan assists me with scheduling for Romance Lives
Forever. She is the blog admin. Look for emails from her.  Nicole and I want to ensure everyone who requests
a spot on the blog gets a personal response. Please use this email if you have questions
or need help: rlfblog-owner@yahoogroups.com
We both receive email sent here. You don’t have to join a group or do anything
special. This group simply provides a joint email for us and streamlines things
for you. The email address is included in all downloadable interviews on the FAQ page. 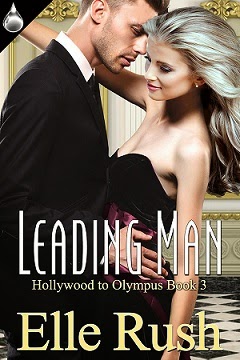 Tell us about yourself, please.
Hi, my name is Ashleigh Jessup. I own and run Jessup Dance Studio
in Los Angeles, California. Have a seat but watch out for the crutches.
*cell phone beeps*
Please excuse me a minute.
*reads text*
Nick – my boyfriend Nick Thurston – wants me to tell you that
the crutches are not his fault and no toes were broken in the making of this romance.
You’ll understand why he wants to clear that up when you read the book Elle wrote
about us. Actually, my twisted knee is what happens when a dance instructor gets
between two five-year-old ballerinas who are trying to prove who would be the better
Teenaged Mutant Ninja Turtle.
Authors call what you want but cannot have “the conflict”
— what is yours?
I want to expand my dance studio. I’ve worked my ass off for
my success and now that it’s paying off I need to keep up the momentum. Unfortunately
success comes with roadblocks and they pretty much have me at a stand-still at the
moment. I also want Nick. Frankly, getting the dance studio will be easier because
that boy’s middle name is Trouble. Adding Nick to my life actually pushes my dream
studio farther away because lives like ours aren’t meant to intertwine but I’m not
willing to compromise.
Tell us about your significant other, that person who makes
living worthwhile.
Nick? Nick is awesome. He’s a second generation Hollywood actor
– on both sides of the family – so you know he’s got the looks. Unfortunately he
also has the attitude. That’s something we’re both working on. He’s funny and generous
and incredibly talented whether he’s on the stage or in front of a camera. He’s
starred as Ares, the god of war, for all three years of Olympus and he is about
to start shooting their fourth season. Nick is almost perfect… I only wish the boy
could dance.
What would that person say about you?
He’d say I’m sexy and intelligent and witty and that I’m the
best dance instructor on the planet. I know because we’ve practiced this question
for the press.
What is your family like?
I’m an only child. I think I’ve spent a total of an hour with
my parents since I turned eighteen. Next question.
Why are you happy (or not happy) with the way your story ended?
I’m happy with it. The very end was good but the part just before
that sucked big-time because… I don’t want to talk about it. You’ll have to read
the story. Let’s just say you don’t need drama in your life but anything worth having
is worth the effort you put into it. Nick and I did a lot of work on our own issues
and on building something together. Now I think we have a real shot at something
good in the future and we are definitely on the right path to get there.

Elle Rush is a romance author from Winnipeg, Manitoba, Canada.
When she’s not travelling, she’s hard at work writing her contemporary romances
which are set all over the world. Elle has studied several languages and has flunked
poetry in every single one of them. She also has mild addictions to tea, cookbooks
and the sci-fi channel.
When writing the book, what did you discover about this character
that surprised you?
I’m very close to my family, and I knew Ashleigh was
estranged from hers. When I introduced her parents into the book, her reaction
surprised me.
Are any sequels planned for this book?
Leading Man is the third book in the Hollywood to Olympus
series. I hope to have at least one more novel later this year.
What genre(s) would you like to write that you haven’t tried
yet?
I’d love to try to write a paranormal romance – particularly
a shifter book – because I read a ton of them.
What would your readers be surprised to learn about you?
Every character I write has one of my personality traits. In
this book, it’s Nick’s inability to dance. I can’t dance. At all. Not even a
little bit. I have no rhythm whatsoever. In fact, I’m so bad that Nick makes me
look good.
Why should readers who haven’t picked up one of your books
before give this one a try?
I think everybody has had a crush on an actor at some point
and I think the fantasy of having it come true will appeal to a lot of readers.
Also, Ashleigh and her friends are hilarious, their boyfriends are smokin’ hot,
and if readers like things a little steamy, this book can provide that too.
Is there anything you’d like to say to your readers?
Hi, readers! Thanks for your support! I’m a romance reader
too, so check out my newsletter for deals and sneak peeks on my books and for
recommendations about other great writers. Please feel free to say
“hi” on any of my social media accounts.

Title Leading Man
Genre Contemporary Romance
Author Elle Rush
Book heat level (based on movie ratings): PG13
Olympus heartthrob Nick Thurston is a leading man with a problem.
His new play opens in a month and when it comes to the pivotal waltz scene, he can’t
lead. When he broke up with his dance instructor girlfriend, it also ended their
professional relationship and now he needs a new teacher. Desperately.
Ashleigh Jessup needs to find a new building to take her booming
dance studio to the next level. She doesn’t have time for a private student, but
she’s willing to make an exception to do a favor for a friend and earn extra money
for her down payment.
Ashleigh’s success has come at the cost of her love life, so
she can’t believe it when Nick is good with them spending as much time on their
careers as they do with each other. But when Nick’s ex tries to sabotage their relationship,
Nick begins to doubt Ashleigh’s intentions when she benefits from his fame, and
Ashleigh has to decide if she’s willing to risk her business for a relationship
Nick may not even believe in.