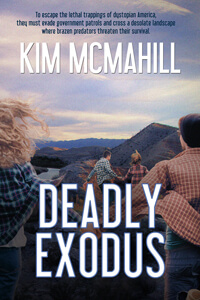 Kim McMahill, welcome to Romance Lives Forever. I’m Kayelle Allen, author and owner of this blog. Happy to have you here! Please tell us about Deadly Exodus.

Genre: Dystopian Young Adult Romance
Book heat level (based on movie ratings): PG13
To most, America has become a safe, orderly, predictable place, but to a few, like Nyla and Ethan, it has become a prison. Inseparable since childhood, but now faced with being torn apart, they are determined to change the course of their future. With a ruling authority too powerful to challenge, only the most courageous dare to defy the new order and embrace forbidden love.

Where to buy Deadly Exodus

Kim McMahill grew up in Wyoming which is where she developed her sense of adventure and love of the outdoors. She started out writing non-fiction, but her passion for exotic world travel, outrageous adventures, stories of survival, and happily-ever-after endings soon drew her into a world of romantic suspense and adventure fiction. Along with writing novels Kim has also published over eighty travel and geographic articles, and contributed to a travel anthology. Kim currently resides in Colorado, and when not writing, she enjoys gardening, traveling, hiking, and spending time with family.
Blog: https://kimmcmahill.blogspot.com
Twitter https://twitter.com/kimmcmahill
Facebook: https://www.facebook.com/KimMcMahillAuthor/
Goodreads http://www.goodreads.com/author/show/849945.Kim_McMahill
http://www.goodreads.com/book/show/25623284-a-dose-of-danger
Amazon Author Page: http://www.amazon.com/Kim-McMahill/e/B007IK0EJW/
Instagram https://www.instagram.com/kimmcmahill/ 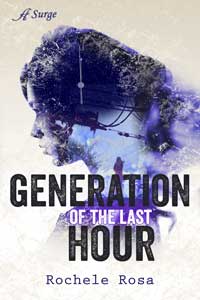 Today’s featured book is Generation of the Last Hour, a dystopian by Rochele Rosa.

In an underground city devoid of adults, fifteen-year-old Raquelle Granger holds the position of Council Member, and thousands of lives within City Ten rest in her hands. Unfortunately, she only has two years left until she’s supposed to join the adults on the frontlines in a war that never seems to end.

But when the enemy army rolls into the area with drills, intent on destroying the city and taking no prisoners, Raquelle, together with her little brother and childhood best friend, must make a choice—Fight, or die a martyr among the youth.

Rochele Rosa is a small town girl with big city ambitions. She grew up in rural Illinois, but has earned an internship with a public relations firm in New York City this summer. As a rising senior at Murray State University, a member of the PRSSA and Chi Alpha, she has no where to go but onward and upward.

Posted on  04/08/2015 by Kayelle Allen
Amy Boyles author of Rendered answers five easy questions to
help readers get to know her better.

After living in Chicago, Louisville and New York,
Amy finally settled in North Alabama with her husband. Along with writing, she has
a passion for cooking ridiculously fattening food and complaining about weight gain.
She loves to connect with readers.
What’s your favorite down-home
family style meal?
I’m from the South and
though neither of my parents are from the area, they relocated us here when I was
five. However, it wasn’t until I was well into my twenties that I started eating
the down-home food. My favorite meal, without exception, would have to be Turkey
or Chicken and Cornbread dressing. Dear Lord. If you’ve never had cornbread dressing,
you haven’t lived. Seriously. I’ve made it enough times that I don’t use a recipe
anymore, but if you’ve never made it and you love to eat—find a recipe and try it.
Hopefully, you’ll thank me for the recommendation.
What is your go-to meal
when you dine out?
Dining out? What’s that?
I have a toddler and am expecting another child, so I don’t get to do that anymore!
That question just depresses me. Just kidding. If I remember correctly, my go-to
meal used to be Chicken Tikka Masala at just about any Indian restaurant. I love
it. From what I understand, it’s not an authentic Indian meal, but seriously it’s
so freakin’ good it makes me happy just to think about it. Eating some of that with
warm naan bread and I’m in heaven. At least for the twenty or so minutes it’ll take
me to eat it.
Who is your “book
boyfriend” (that hottie you read about and drool over)?
This is such an easy question!
Hands down, my book boyfriend is Daemon Sadie from Anne Bishop’s The Black Jewels
Trilogy. If you’d asked me this maybe three years ago I would’ve said Richard Rahl
from the Sword of Truth series because there’s something honest in his altruism.
But once I read Daughter
of the Blood and experienced the raw pain and deep suffering of Sadie, I was absolutely
won over. His character undergoes such an incredible arc over the span of that book
—from practically broken and brooding to being someone full of wondrous joy. It’s
an awesome journey to have been a part of. And he’s so sexy! It’s not even overt—he
simply is. Oh! And he’s dangerous, too! I wouldn’t want to cross paths with him.
If you’ve never read the book. Go. Buy. It. Now. Sadie is worth every cent.
Tell us about your favorite
toy as a child.
Ok, so I had this Wonder
Woman doll that I loved. Adored. I also had Wonder Woman underoos (aging myself,
I know) that I wore as a bathing suit. Why? Because I loved them. No, I didn’t care
that they were underwear. They signified Wonder Woman, and that was all that mattered.
Anyhoo, I had this Wonder
Woman doll. Loved her…and then I lost her. I don’t know where. I probably left her
in a store or a bathroom or something. But I remember that I dreamed about getting
another doll because I adored her so much. I dreamt that I received this gift at
Christmas. Funny thing is, I don’t remember if I ever got another doll, all I remember
is I lost her and then dreamed I got her back. Ha! That’s sort of the story of a
romance novel, isn’t it? Two people come together, then something keeps them from
each other and then they wind up together in the end. Amen to that.
When you read for pleasure,
what kind of books do you choose?
I’ll read anything. Mostly.
I read romance—contemporary, historical, whatever catches my eye, but I mainly just
want a great story. Something that takes me for a ride. I think that’s why I read
a lot of fantasy. I want to live in a world and become part of it, learn how the
magic works and be surprised by the twists and turns that great fantasy writers
throw into their novels.
What I don’t read a lot
of is crime/mystery/suspense. Not because I don’t like it, but because I’m not as
familiar with the genre. By all means, if any readers have suggestions for great
books in those categories, throw them my way. I’d love to have more books to fill
my Kindle.

Title Rendered (A Dark
Revolution Novella – Book Two)
Genre Romance, dystopian
Author Amy Boyles
Book heat level (based
on movie ratings): R
Ten years ago, Drian Becker underwent the Rendering, a humiliating body
exam imposed upon the masses by her father, a commander in the Patriot Army. Being
a high ranking official’s daughter, Drian thought she was safe from the practice—not
so. Her father’s betrayal left her emotionally scarred and dishonored.
It’s now 2098. Drian hasn’t thought about the Rendering since she became
leader of a rebel faction—mostly because she’s an expert at hiding her feelings
behind a thick outer wall of badass attitude.
All that changes when Colvin Hinton walks into her camp. With his easy
swagger and even easier demeanor, Colvin makes being a rebel look good enough to
taste. But when Drian finds herself tangled in his charms she lets down her guard,
giving an old enemy the chance to take her out once and for all.
If loving a man is this dangerous, would Drian have been better off remaining
in the clutches of her father and living with the scars of being Rendered?

Other books by Amy Boyles