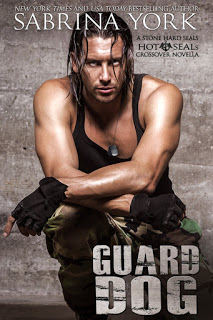 Title Guard Dog
Genre Erotic Romance
Author Sabrina York and others
Book heat level (based on movie ratings): R
Guard Dog by Sabrina York—Stone Hard SEALS and Hot SEALs Crossover Novella
Love Hot SEALs?
What if all your favorite military romance authors got together and wrote a series of HOT SEAL romances in the same world?
This is Cat Johnson’s HOT SEALS Kindle World. It’s an exciting opportunity for you to discover new authors writing in the genre you love in a world you know!
And if you become inspired to do so, YOU can write and publish a HOT SEAL romance in Cat’s world too!
Cat Johnson’s Hot SEALs Kindle World launches on August 4th. Check out all the scorching books by NYT and USA Today bestselling authors in this exciting crossover adventure!
Guard Dog by Sabrina York
A scorching sequel to Stone Hard SEALs
Mason Steele expected to be a SEAL until the day he died. And he was. A pity they revived him. Now he’s been mustered out of the Navy and his life seems wholly unsatisfying. He misses the action; he misses the camaraderie; he misses being able to use his tightly-honed skills. He’s lucky to have snagged this job with GAPS—the Guardian Angel Protective Services—it provides some hope for his future. But the last thing he wants to do is babysit a spoiled heiress who is obsessed with the color of her nail polish and carries a Chihuahua in her purse.
But there’s more to Pansy Hightower than can be seen at first glance. She’s smart, sassy and determined to save the business her late mother built. She resents having a guard dog and does what she can to lose her muscular shadow. But when it becomes clear that someone is targeting her—perhaps for the same kind of fatal “accident” that befell her mother, she decides having the 240 pound SEAL with killer instincts and lethal hands at her back might be a good idea after all.
Until they share a kiss, that is. Until those lethal hands prove they have other talents as well. Talents that leave her breathless and wanting and weak. The last thing either of them wants is a relationship, but the scorching passion between them cannot be denied…even though it will undoubtedly spell disaster for them both.

Please join me in welcoming military author and former
military woman Elle James to the Romance Lives Forever blog. She’s going to
share with you today about her sister, author Delilah Devlin, also a former
military woman. Take it away, Elle! And thank you for your service. As a former
Navy vet myself, I know the sacrifice it took.
—
Born and raised as children of a career Air Force man, it was
only natural that my sister and I would follow in my father’s footsteps and join
the military. Because my father retired in a small town with a public university
that only had Army ROTC, my sister and I joined the Army ROTC program. We loved
the discipline and challenge of being a part of the military and fully embraced
the lifestyle.
My sister graduated and went right into the U.S. Army. I married
in college and joined the U.S. Army Reserves and later branch transferred to the
U.S. Air Force Reserves. We are now both retired and writing full time, but the
military is still very near and dear to our hearts. We loved being a part of something
bigger than ourselves, serving this great country and protecting our freedom.
This veterans day we teamed with a great group of authors who
write military romances to produce a boxed set of military romances in honor of
Veterans Day and all the brave men and women who help to protect our nation.

To prove her love and save her man, she has to go above and beyond
the call of duty. SEAL Francis McKade never acted on his feelings for his best friend’s
sister. All that changes at a wedding in Hawaii,
but the next morning, he’s called for a mission-one that leaves his world in shambles.
Months later, Kade shows up in her bar a changed man. When he pushes her to her
limits in the bedroom, Shannon refuses to back
down. One way or another, he’ll learn there’s no walking away from love—not while
she still has breath in her body.

Award-winning Author
www.ellejames.com
Two Navy SEALs jeopardize their lives and hearts in a battle-torn
land when they vie for the love of one sexy Night Stalker helicopter pilot. SEAL
Reed Tucker doesn’t believe in commitment, until he tangles the sheets with one
hot pilot, Delaney O’Connell. His phobia against commitment is challenged when his
best friend asks Delaney to marry him. As a helicopter pilot for the 160th Night
Stalkers, Delaney knows the risks of loving a SEAL. When her lover’s friend loses
an arm in battle, she can’t refuse his marriage proposal when he’s already lost
so much. In love with one man, pledged to marry another, she’s torn. Tuck and Delaney
must come to grips with the happiness they owe themselves and the happiness of their
friend who has lost so much.

SEAL the Deal by Sharon Hamilton

Bestselling Author
http://sharonhamiltonauthor.com/
A SEAL’s nightmare of a promise given at his sister’s deathbed
gives him the woman of his dreams. Special Operator Nick Dunn promises his dying
sister that he will help shut down her business and settle her affairs. He must
work with his sister’s best friend he vaguely remembers. But boy has she grown up.
Though Devon Brandeburg created a small fortune in real estate, she has a total
lack of experience with men. Who needs their testosterone-stuffed egos sucking the
air out of the room, like Nick’s does? The promise turns into a hot affair neither
expected with Nick the teacher in Devon’s journey
to womanhood. As she comes alive in his arms, the student brings the teacher something
he’s never allowed himself to want, and now needs.

Award-winning Author
www.delilahdevlin.com
A pampered travel agent escapes through the jungle with an undercover
DEA agent when a drug lord mistakes her for a rival’s daughter. After surviving
a week of anti-terrorist training in a Central American jungle, Maya Cordoba is
ready to kick off the mud from her designer boots after she hijacks her sexy driving
instructor. Instead, she finds herself staring down the barrel of an AK-47and being
kidnapped! Mistaken for a rival drug lord’s daughter she knows if they learn she’s
not who they think she is—she’s dead. Rescue comes from ex-marine and undercover
DEA agent, Angel Rickman. He promises to get her out as long as she does everything
he tells her to. Together, they make a mad dash through the jungle with the drug
cartel’s army on their tails.

Her Forever Hero by JM Madden

Bestselling Author
www.jmmadden.com
When the boss’s pregnant, unwed daughter needs rescuing, disabled
Marine Grafton Parks proves he’s still a hero. Kendall Herrington is drawn to her
handsome new security guard, prosthetic hand and all. The man is totally wrong for
her, but on a lonely Christmas night, she gives in to her body’s demands, regret
setting in on the morning after. Former EOD Marine Grafton Parks knows Kendall is resisting admitting she’s pregnant and that the
board won’t allow an unwed, pregnant female to run the multi-billion dollar Herrington
Corporation. Even if she is the boss’s daughter. As they struggle to come to terms
with each other, an unexpected danger threatens their lives. Will they survive long
enough for him to be…Her Forever Hero?

NY Times and USA
Today Bestselling Author
www.catjohnson.net
A weekend liberty leads to unexpected passion between a Marine
and his best friend’s sister, but he must survive seven months in Afghanistan to get
back to her. Marine Gunnery Sergeant John “Crash” O’Malley has two goals.
Enjoy his liberty in New York City, and survive his
deployment to Afghanistan.
What he didn’t plan on is Trish. A guy can’t have a one-night stand with his best
friend’s sister and then abandon her at midnight when his liberty ends, but starting
a new relationship days before shipping out would be crazy. Crash doesn’t realize
his friend’s displeasure is nothing compared to what the insurgents have in store
for them in the Helmand
Province. Now, Crash’s new
objective is to get home alive and make Trish his.

Elle James spent twenty years livin’ and lovin’ in South Texas, ranching horses, cattle, goats, ostriches and
emus. Retired Lt Colonel U.S Air Force Reserves and former IT professional, Elle
is proud to be writing full-time, penning intrigues and paranormal adventures that
keep her readers on the edge of their seats. She has 39 works with Harlequin, self
published works under pen name Elle James, over 40 works with other publishers including Kensington and Avon and 18 works self-published under pen
name Myla Jackson. Now living in northwest Arkansas, she isn’t wrangling cattle, she’s wrangling
her muses, a malti-poo and yorkie. When she’s not at her computer, she’s traveling,
out snow-skiing, boating, or riding her ATV, dreaming up new stories.

Sharon Hamilton
Life is one fool thing
after another.
Love is two fool things
after each other.
Sharon’s
award-winning spicy Navy SEAL stories in the SEAL Brotherhood series, have consistently
made best sellers lists and review sites. Her characters follow a sometimes rocky
road to redemption through passion and true love.
Her Golden Vampires of Tuscany are not like any vamps you’ve
read before, since they don’t go to ground and can walk around in the full light
of the sun.
Her Guardian Angels struggle with the human charges they are
sent to save, often escaping their vanilla world of Heaven for the brief human one.
You won’t find any of these beings in any Sunday school class.
She lives in Sonoma
County, California with
her husband, and two Dobermans. A lifelong organic gardener, when she’s not writing,
she’s getting vera vera dirty in the mud, or wandering Farmer’s Markets looking
for new Heirloom varieties of vegetables and flowers.