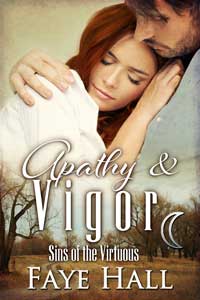 Faye Hall, welcome to Romance Lives Forever. I’m Kayelle Allen, author and owner of this blog. Happy to have you here! We’re excited to find out more about your hero, but first, tell us about the book.

Apathy and Vigor by Faye Hall

Genre Australian Historical romance
Book heat level (based on movie ratings): R
Will the love of a woman save him from his own apathy?
Tristen Brone lived a carefree life of wealth and passion – until one day it all came crashing down around him. In only a few days he lost everyone he loved in the world – his woman, his best friend and his parents. The once confident, handsome young man, was now scarred for life and on a quick downward spiral of sorrow and depression. He no longer wanted to live.
When Amalie Fergus arrives on his doorstep, a travel bag in her hand, begging him to take her in, he becomes suspicious. Despite his passionate past with this woman, and the feelings he still had for her, all he could think of was how quickly she abandoned him after the fire that killed her brother and left Tristen physically scarred. So why had she come back into his life after all these months?
Amalie Fergus lost her brother in a fire, her lover had abandoned her upon finding her with child, and now her father had been poisoned, leaving their properties to be repossessed. She had nothing and no one left to turn to. In desperation, she found herself forced to work for a living, trying to do her best as a maid for any rich gentleman who would take her in. What she hadn’t expected was for one of those men to try and force carnal favours from her, or for her now to be on the run for his murder.
Running from the scene of the crime, fearful what was to become of her, Amalie finds herself colliding with a man from her past who offers to hide her from the police on one condition – she return to Tristen and steal some property papers from him.
Trapped by the man from her past, and now forced back into Tristen’s life, Amalie searches for who murdered her brother. She could never have foreseen the cruelty she would discover, or the man she would willingly surrender her heart to.

Know the Hero from Apathy and Vigor

Here are some fun questions to help us know your hero.
It’s late, he’s bored. What does he do?
Tristen would be looking over information he’d been given about his best friends murder as well as studying property papers for estates he’s interested in buying.
What kind of food would he impulse buy if hungry?
He’s a very simple man with servants to cook for him. Tristen would be content with steak and potatoes.
Describe the kind of clothes he prefers to wear.
You will never see Tristen in a suit, despite his wealthy upbringing. He wears denium jeans and cotton work shirts.
Does he know how to fix things?
He does yes. Despite having servants, he is not afraid of work and often can be found on the cattle station helping his workers.
He tried to do something and it went badly. Tell us about it.
Tristen tried to save his best friend from a fire, but failed. He blamed himself and ended up dependent on alcohol and heroin.
How does he act around children he doesn’t know?
After the fire that left him scarred, he becomes a hermit and avaoids people, so he wouldn’t come across any children.
What is he like first thing in the morning?
Usually Tristen would be out on the cattle station inspecting fences and feed stocks.
How does he handle things when in a “proper” social situation?
Tristen was raised very well, and was very good at social flattery. Some would even describe him as quite a charmer.
Valet or takes care of himself?
He takes care of himself.
Necktie/cravat or open shirt?
Open shirt – he’s not big on formal attire.
Sleeves buttoned or rolled up?
His sleeves are rolled up, but not far as he’s very aware not to reveal his scars.
Powdered wig or natural hair?
Tristen has natural black, collar length hair.
Carriage or horseback?
Though he has been known to take the odd carriage, Tristen’s far more comfortable on horseback.
Thanks for helping us get to know your hero!

Where to buy Apathy and Vigor

Come on a journey through 19th century North Queensland, Australia and explore the passions and hardships of unique characters.
There is corruption, deceit and murder, as well as cattle rustlers, slave traders and hell fire clubs. Explore townships of Jarvisfield and Inkerman, as well as Ravenswood and Bowen. One book even incorporates my great grandmothers cattle station ‘Inkerman Downs Station’. As well as an author, she is also the most spoilt wife in the world, and a very contented mother. Come and discover all the passion and drama of North Queensland history.
Website https://www.faye-hall.com
Twitter https://twitter.com/FayeHall79
Facebook https://www.facebook.com/pages/Faye-Hall/174774709247649
Pinterest https://www.pinterest.com/fayehall79/
Goodreads http://www.goodreads.com/author/show/6882637.Faye_Hall
Amazon Author Page http://www.amazon.com/-/e/B00DPIMSMW