Posted on  07/01/2015 by Kayelle Allen
Last month, Romance Lives Forever had 29 posts in a 30 day month.
Each month, the RLF Gems post ranks in the top ten, but is not counted, in order
to focus on guests.
The Top Blogger for June was Mae Claire. She wins a month of
free cover advertising on the blog. Our Top Blogger of the Year is publisher Liquid
Silver Books, which won a year of free advertising.

Because the person who gets the most comments in a month is not always the
person who gets the most page views per month, I instituted the Top Chatter Award.
This is the award for the person who receives the most comments. It goes to the
top three people in that category. To win, a guest must have five or more comments
(not counting the guest author’s).
1. Mae Clair
2. Donna Cummings
3. Annette Mardis
Romance Lives Forever features authors and new books. It has
a blogger’s FAQ page with a downloadable guide and six optional interviews. Readers
can follow via Google+, Networked Blogs, Linky Followers, email, an RSS feed, and
there’s a blog button readers and authors can grab. Authors can share previous books.
The blog uses author or publisher names as tags on posts, and author Twitter handles
in the titles. The site is broadcast over Triberr with a potential reach of over
1.2M readers via its Twitter-linked network. Twitter mentions are also gathered
in several Paper.li ezines, giving the author additional opportunities for promotion.
The Romance Lives
Forever Paper.li ezine features only guest authors, and the day’s guest is on
its front page every day.
New for 2015
Each post will be featured on the Romance Lives Forever Pinterest
board within a few days after it goes live. https://www.pinterest.com/kayelleallen/romance-lives-forever-rlfblog/ 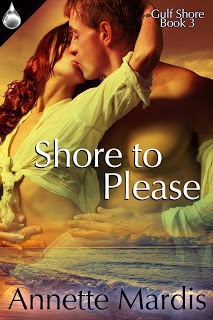 Title: Shore to Please
Genre: Romantic suspense
Author: Annette Mardis
Book heat level (based on movie ratings): R
Tara Langley thought she’d found the
love of her life, but he betrayed her with another woman. So she buried herself
in her mission: convincing Gulf Shore Aquarium that dolphins and whales belong
in the wild, not in artificial pools.
If Tara had her way, Paul “Flipper”
O’Riley would lose the job he loves. Flipper is the head dolphin trainer, and
the aquarium’s dolphins are his babies. While he’s open to having a real family
one day, the last person he would choose to be his wife and the mother of his
children would be Tara.
These two should be sworn enemies,
after all. He certainly swears at the sight of her. And his surfer-dude looks
and lover-boy reputation aren’t exactly what Ms. Prim and Tidy had in mind when
she pictured her ideal man.
But in the age-old way of opposites
attracting, Tara and Flipper find themselves inexplicably drawn to each other.
There’s no possible way a relationship between them could work, right?
As the two try to find common ground
amid all the quicksand, Flipper and his coworkers become the targets of an
increasingly more menacing campaign to force the aquarium to release the
dolphins under its care. Will Gulf Shore Police Detective Joanna Tompkins catch
the culprit before it’s too late?

Name: Paul “Flipper” O’Riley
Age: 36
Gender: Male
Birthplace: Dothan, Alabama
Profession: Head dolphin trainer, Gulf Shore Aquarium
Welcome to Romance
Lives Forever. Your author introduced you. Now we’d like to get to know you
better. Please tell us about yourself.
I decided as a kid that I wanted to be either a dolphin
trainer or a professional baseball player. I went to college on an athletic
scholarship, but I knew I wasn’t good enough to make it to the Major Leagues. I
got my degree in interdisciplinary studies with an animal behavior
concentration, worked with beluga whales during an internship, and was lucky
enough to land a job in Gulf Shore in a highly competitive field. For some
reason, though, there’s this idea that I’m some kind of beach bum and a real
player with women. I guess that’s partly my fault because dolphin trainers are
like rock stars in the Florida beach town I live in, and I get plenty of
attention from ladies who say they like the way I fill out my wet suit. But I
got my heart broken a while back and don’t go out on as many dates as people
think. Right now, I’ve got my eye on a woman who’s wrong for me in so many
ways. Still, I can’t stop thinking about her and wishing we could find a way to
make it work.
What are two places
you would like to visit before you die, and why?
I’d like to go to one of those remote lodges along the
Hudson Bay coast in Canada to see polar bears and beluga whales in the wild. And
maybe the Northern Lights, too. Seeing marine animals in their natural habitats
is always an awe-inspiring experience for me. I’d also love to go on a Danube
River cruise in Europe. There’s one trip that includes tulips field and
windmills in Holland, castles in Germany and vineyards in Austria. I think that
would be very romantic and something Tara would love. Can you believe I’m
fantasizing about seeing those sights with her?
Where is a place you
would never like to return, and why?
I’d have to say St. Augustine, Florida, the first six months
after my family moved there. I was 12 years old, and it was really tough being
the new kid. I hadn’t grown into my body yet and was very gangly and awkward.
Plus, my classmates made fun of the way I talked, so I forced myself to speak
without an accent until it became second nature. My parents were hurt at first
because they assumed I was ashamed of my roots. I think they finally understood
after my sister stopped using certain expressions she thought made her sound
too redneck.
Who is someone you
would like to meet, and why?
My paternal grandfather, who died when I was a baby. I wish
I’d gotten to know him. He was awarded a Purple Heart after being wounded
during World War II. My parents said he doted on all his grandchildren and that
he was a big baseball fan. It would’ve been fun to sit and watch games with
him.
Who is someone you
would like to avoid, and why?
Steven Christianson, Tara’s ex-boyfriend. I’d be compelled
to punch him in the face for treating her so badly. But I guess if he hadn’t
cheated on her, they might still be together, so maybe I should thank him for
being such a tool.
If you could time
travel to any date, what would it be, and what would you do there?
I’d go back to the 1920s to New York to watch Babe Ruth
play. Seeing him knock one out at the original Yankee Stadium would be a
baseball fan’s dream come true.
What is your birth
order?
I’m the youngest of two.
Tell us about your
favorite toy as a child.
My parents bought me one of those wiffle ball/plastic bat
combos, and my dad spent hours pitching to me. Those are some of my fondest
memories from childhood.
Describe your
favorite food and how it’s prepared.
I love filet mignon cooked medium well on the grill and
topped with mushrooms sautéed in melted butter with a touch of garlic, plus sea
salt and cracked black pepper. Pair that with a baked potato with butter, sour
cream, cheese and crumbled bacon. Man, my stomach is rumbling just thinking
about it.
Tell us about your
best friend.
Evan Sanders is the chief photographer/videographer at Gulf
Shore Aquarium. We’ve spent a lot of time together playing darts, drinking beer
and eating wings at Bikini Barb’s Bar & Grill, and we’re also on the same
softball team. He’s just a good guy who’s easy to be around. I narrated a
documentary he did on Trident, a baby dolphin the aquarium rescued, and Evan’s insanely
talented. He’s engaged now to Dani Davidson, and I couldn’t be happier that
he’s found the love of his life. I’ll be honored to be the best man at his
wedding.

As a girl, Annette dreamed of
being an astronaut, but she stank at science and math and became motion
sick riding the bus home from school. So she went with her second
choice—newspaper journalist—and stuck with it for more than three decades.
After years of ignoring well-meaning people who said, “You should write a book,”
she finally did. And then she wrote a few more. When she’s not working,
Annette usually has her nose in someone else’s novel or her gaze
glued to sports on TV. She has three totally spoiled pets, enjoys being
the designated sightseer on her husband’s Harley, and volunteers at Clearwater
Marine Aquarium, home of diva dolphins Winter and Hope from the Dolphin Tale films.