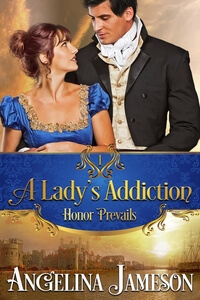 Angelina Jameson welcome to Romance Lives Forever. I’m Kayelle Allen, author and owner of this blog. Happy to have you here!

Looking forward to reading about your research on alcohol abuse in the Regency Era, but first, please tell us about A Lady’s Addiction.

A Lady’s Addiction by Angelina Jameson

Anna, a widow battling alcohol addiction, is convinced she is worthless unless she bears a child. Devlyn, sterile after an accident, has returned to England from an assignment for the Foreign Office. Anna and Devlyn join forces to protect an innocent child from a blackmailer. Can they come to terms not only with their feelings for each other but whether they will allow society to dictate the true significance of life?

Alcohol Abuse in the Regency Era

The heroine of my book A Lady’s Addiction has a problem with alcohol. Anna used it to self-medicate, to deal with the disgusting attentions from her husband. Now a widow, Anna struggles to rid herself of her nightly ritual of drinking a bottle of wine to dull her senses.

The term alcoholism wasn’t around in the Regency era and wasn’t coined until 1852. Reformers labeled those who often drank in excess as habitual drunkards. At the time habitual drunkenness wasn’t seen as a disease. I portrayed Anna as an alcohol abuser not an alcoholic. She uses alcohol to de-stress. If she continues on this path she would most likely become an alcoholic.

Anna’s drink of choice was wine. Wine was plentiful in upper class Regency households. Wine was a gentlemanly drink. It was imported and expensive, perfect as a posh drink for the upper classes. During the years of war between France and England it was harder to get French wine. The English turned to new favorite wines from Spain, and Portugal. These wines were Madeira, Malaga, port, or sherry. The hero in my book refers to Portuguese wine in the first chapter. 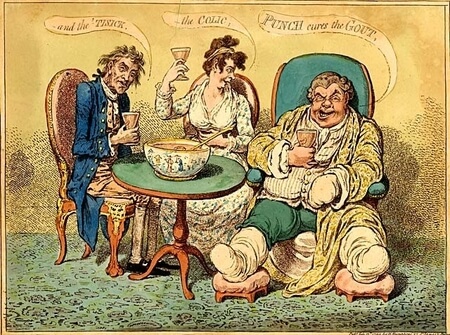 During the Gin Craze in 18th century London binge drinking became a huge social problem. Gin was cheap and readily available to the lower classes. The heavy consumption of alcohol continued during the Regency. In the Reminisces of Captain Gronow, the author stated: “Drinking was the fashion of the day.”

It is well known that George IV drank heavily. Did George’s excessive drinking reflect current fashion or set it? I think both. Drinking played an extremely important social role in eighteenth century England. Anyone who reads Regency historical novels has heard of gout. The high consumption of port and fortified wines led to the upper class disease of gout.

What about women drinking in the Regency era? While there are many cartoons and articles from the Regency showing excess drinking by men, it was much harder to find information about those Regency women who may have abused alcohol. Lady Caroline Lamb was known to be addicted to alcohol and laudanum near the end of her life. It is taken for granted that women of society drank to relieve the boredom and monotony of their lives. Women drank wine with their meals and drank sherry in the drawing room after dinner. It is not hard to imagine women overindulging with all the alcohol surrounding them.

The prevailing attitude seemed to be that as long as your addiction didn’t affect your social obligations you were not rebuked for it.

Where to buy A Lady’s Addiction

Angelina Jameson is a multi-published author of historical Regency romance. Growing up in Las Vegas, Nevada, Angelina joined the US Air Force to see the world. Dreams of visiting the United Kingdom were fulfilled when she was stationed at RAF Lakenheath in the beautiful countryside of Suffolk, England. Five years later she returned to the states having acquired a love of not only all things British but also Regency and historical romance.
Website http://www.angelinajameson.com/home.html
Twitter https://twitter.com/RegencyLady
Facebook https://www.facebook.com/angelinajamesonauthor/
Pinterest https://www.pinterest.com/angelinafigaro/
Goodreads https://www.goodreads.com/author/show/13734230.Angelina_Jameson
BookBub https://www.bookbub.com/profile/angelina-jameson
Amazon Author https://www.amazon.com/Angelina-Jameson/e/B00V95B9GY