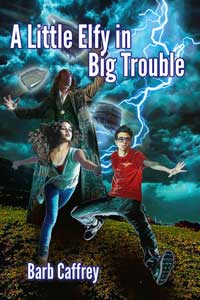 Let’s meet Sarah Birch from A Little Elfy in Big Trouble, a young adult urban fantasy/romance by Barb Caffrey. Welcome to Romance Lives Forever. I’m Kayelle Allen, author and owner of this blog. Happy to have you here! Please tell us about your story.

A Little Elfy in Big Trouble

Barb Caffrey is a writer, editor, musician, and composer from Wisconsin. She’s the widow of writer Michael B. Caffrey, and is continuing her work and his, as a way to keep their love alive. Find her at https://elfyverse.wordpress.com for conversations all and sundry, as she loves hearing from readers!
What was your biggest challenge in writing this book?
Writing it wasn’t hard, but revising it was. My husband died during the revision period, and it took almost eight years to find a publisher interested in my work. At that time, An Elfy on the Loose and A Little Elfy in Big Trouble were just one book: Elfy. My publisher, Lida Quillen of Twilight Times Books, said it was more likely people would find my work if the book was split. Which meant more revision, so the second book would feel a bit more like it was supposed to be separate in the first place.
Why did you choose this character for the interview today?
I’ve never done an interview solely from Sarah’s viewpoint. Bruno is the point-of-view character, but Sarah is the person most of the readers I’ve heard from have appreciated the most. (I didn’t expect that.) I thought maybe they’d like hearing more from Sarah, as a “Thank you for reading” sort of thing.
When writing the book, what did you discover about this character that surprised you?
Sarah is incredibly complex. She thinks she’s not, but she truly is. She’s had to hide a great deal of herself until Bruno shows up, and it took a toll. But now that Bruno’s here, and she’s able to be fully herself, she’s gaining self-worth by leaps and bounds.
Are any sequels planned for this book?
Absolutely! I have a sprawling sequel planned called An Elfy Abroad, which is a horrible pun. (Bruno’s the Elfy, Sarah’s the “broad.” Though if you called her one, she’d probably stun you with her magic. And rightfully so.) This book looks like it’ll end up as three separate books as the “Elfy Abroad” trilogy down the line, and it’ll take us to the Troll Realm, the Elfy Realm (again, as much as Sarah hates it), and different parts of the Human Realm (our Earth).
What genre(s) would you like to write that you haven’t tried yet?
I would like to write a straight romance someday. But so far, I’ve written military SF, milSF/romance, funny fantasy, urban fantasy, romantic fantasy…so far, I haven’t had a story idea that didn’t have some sort of SF or F element to it. And until I do, I just won’t write that straight romance as it would be an utter bore.
What would your readers be surprised to learn about you?
I have two degrees in music, a Bachelor’s and a Master’s. I play the saxophone, clarinet, and oboe, and compose music.
Why should readers who haven’t picked up one of your books before give this one a try?
I think most people will enjoy the romance, the humor, the coming of age stuff, and the fact that the story doesn’t take itself too seriously. (I also would like to think that Sarah isn’t the only one who loves Bruno. Though perhaps only Sarah should love him romantically, as that last would just be weird.)
Is there anything you’d like to say to your readers?
Thanks for giving a little-known author a try! I hope you’ll enjoy my work.

Where to buy A Little Elfy in Big Trouble