Tag Archives: A Baron for Becky 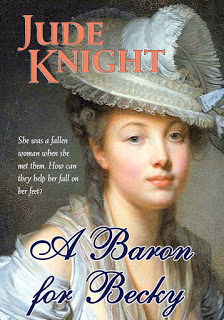 Tell us about
yourself, please.
Which
self? Mrs Rebecca Winstanley is a respectable widow, living with her daughter
in a modest apartment in a select part of London. Mrs Rose Darling lives a few
streets away, in an elegant townhouse where she entertains the Marquis of
Aldridge at his pleasure.
I
am both and neither—I act a part, always.
Authors call what you
want but cannot have “the conflict” — what is yours?
I
dream of a respectable life, the life stolen from me when I was just 15. No. It
is more than a dream, it is a plan. I plan to leave London, to set up somewhere
I am not known and to raise my daughter to a better life than the one I have
known.
I
dream of love. Not the love I have for Aldridge, my protector. I am fond of
Aldridge, but I know he will never be mine. I dream of a man who will be loyal
and true; someone who will see the real me, and love me anyway. Ridiculous and
impossible, but there you are.
What inner doubt
causes you the most difficulty?
I
doubt that anyone would love me, or even like me, if they saw more than the
parts I act. Indeed, how could they? Inside, I am still the broken child,
mourning the loss of my innocence and hiding from the horror my life became. I
would not want even Sarah to see that person. How could she love me when I do
not love myself?
In the story world
your author created, explain what it is you fear most and why.
I
fear that my past will haunt me forever, that it will surface at the worst
possible time to destroy my daughter’s chance of escape to a respectable life.
I must keep my secret; I must keep her safe.
Sarah
is only nine, but—despite our care—she is already suspicious of Aldridge’s
place in my life. “Why do the other girls have a Papa,” she asked me last week,
“when all I have is uncles?” I did not know what to say. I fear she will hate
me if she ever knows the truth—but not as much as I fear that the truth will
doom her to the life I have led.
Tell us about your
significant other, that person who makes living worthwhile.
Sarah
makes living worthwhile. I am fond of Aldridge. He is a kind and generous man,
and he has given me a life of ease and luxury I never imagined. But he is my
protector, not my love. I forgot that in the early days of our liaison. Almost,
I gave him my heart. Such feelings are foolish between a courtesan and the man
who keeps her. One day, he will marry one of the debutantes who clutter
London’s Season, and breed fine children with pure bloodlines on both sides.
And I will retire to the country and be a widow, and grow roses.
What would that
person say about you?
I
expect he would say I am beautiful. It seems to be the characteristic that men
notice first and comment on most often. He would also say, I think, that he
enjoys my company. He returns to me between his other affairs. Indeed, he
spends several nights a week with me. He likes to converse, even to
debate—politics, literature, history, business. He is very well read, and he
enjoys a good argument, and even concedes defeat if I manage to convince him of
my facts.
If someone from your
past showed up, who would you NOT want it to be, and why?
Ah.
Now that is a long, long list. I would not want to meet any of my former
clients or protectors. Fortunately, they live in the South-West, and I do not
go there. Only the last was of any social consequence. Perringworth, his name
was, and he is dead these two years.
If you could plan a
happy ending, what would it be?
I
have told you my happy ending. Safety for Sarah. Not enough? Well then, a man
who loves us both. A man who loves Sarah as a daughter and who loves me—the
real me, the hidden me—as his respected and treasured wife. I know it cannot
be, however, and will be content with the life I plan. I cannot see how my
author could give me a better one.

Jude Knight writes strong determined
heroines, heroes who can appreciate a clever capable woman, villains you’ll
love to loathe, and all with a leavening of humour.
Jude Knight is the pen name of Judy Knighton.
After a career in commercial writing, editing, and publishing, Jude is
returning to her first love, fiction. Her novella, Candle’s Christmas Chair,
was released in December 2014, and is in the top ten on several Amazon
bestseller lists in the US and UK. Her first novel Farewell to Kindness, was
released on 1 April, and is first in a series: The Golden Redepennings. .
What was your biggest
challenge in writing this book?
This
book is about three flawed characters, all of whom act in ways that are morally
reprehensible. My challenge was to make them sympathetic—to give the reader
cause to identify with them and want them to succeed. I wrote, tested with beta
readers, rewrote, and retested. I agonised over showing their motivations, and
demonstrating their strengths as well as their very obvious weaknesses.
Why did you choose
this character for the interview today?
Becky
is central to the novel. In my past two books, the heroes have been very clear
to me, and the heroines have emerged as I wrote. The same happened here; I
began with Aldridge, but Becky took over. The action of the book comes as other
characters react to her.
Are any sequels
planned for this book?
I
didn’t plan to write this book at all. It was Aldridge’s idea. Aldridge is
cousin to the hero of Farewell to
Kindness, and half-brother to the hero of my work-in-progress, Encouraging Prudence. I planned to give
him his own novel eventually, but I needed a novella to fill a gap between
publications. A brief book about one of Aldridge’s dalliances seemed as if it
would be fun. Then Becky took over. Now that the book is done, one of the
off-stage characters is knocking at the door of my mind. So not a sequel precisely,
but a linked stand-alone? We’ll see what the plot elves have in store.
Why should readers
who haven’t picked up one of your books before give this one a try?
Try
A Baron for Becky if you like novels whose characters meet life’s challenges by
resolving their own inner demons. It’s very different to my novella, Candle’s
Christmas Chair, which was a sweet traditional, and my first novel, Farewell to
Kindness, which has a large cast and an action-driven plot full of twists and
turns, mystery and thrills. A Baron for Becky has five central characters, and
most of the action focuses on three: Aldridge, Becky, and Hugh. Two heroes and
one heroine. Yes, indeed. As I say, very different.

Title
A Baron for Becky
Genre
Historical Romance (Regency)
Author
Jude Knight
Book
heat level (based on movie ratings): PG 13
Becky is the envy of the courtesans of the demi-monde –
the indulged mistress of the wealthy and charismatic Marquis of Aldridge. But
she dreams of a normal life; one in which her daughter can have a future that
does not depend on beauty, sex, and the whims of a man.
Finding herself with child, she hesitates to tell
Aldridge. Will he cast her off, send her away, or keep her and condemn another
child to this uncertain shadow world?
The devil-may-care face Hugh shows to the world hides a
desperate sorrow; a sorrow he tries to drown with drink and riotous living. His
years at war haunt him, but even more, he doesn’t want to think about the
illness that robbed him of the ability to father a son. When he dies, his
barony will die with him. His title will fall into abeyance, and his estate
will be scooped up by the Crown.
When Aldridge surprises them both with a daring
proposition, they do not expect love to be part of the bargain.