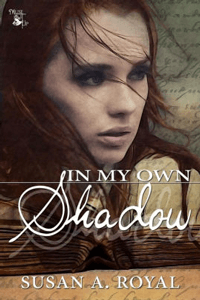 Today’s featured book is In My Own Shadow by Susan A Royal Tell us about your story. We’ll have other questions in a moment.

Talk about the worst day ever! Lara lets her friend Carrie talk her into a blind date, only it turns out the handsome stranger waiting for Lara after work isn’t Carrie’s cousin after all. And, when they’re chased through a portal to another world, Lara realizes Rhys really is out of this world.

Lyra, her alternate in another dimension, has left clues to the whereabouts of the Book of Secrets explaining the mystery of time travel in Lara’s subconscious. Or so Rhys thinks. Power-hungry telepaths who pursue them will stop at nothing to get it, even if it means breaking Lara’s will. To complicate matters, Lara gets tangled up in her feelings for Rhys while exploring her connection with Lyra.

With Rhys as her guardian, a bear of a man named Azle to guide her, and the spirit of Lyra haunting her dreams, Lara must find the Book of Secrets before it falls into the hands of those who want its power. Only then can she return to her world safely.

What species/races of people are in your book?
Humans.
Do you have non-sentient creatures or animals in your story? If so, what are they?
No.

What languages are spoken in your story universe?
Telepaths exist in this world, and some of them are power hungry enough to invade other peoples’ minds to get the information they want.
If you created a language for the story, what is it called?
In the culture of your story world, what is different from ours?
It’s supposed to be run like a business. But Yusel is the head of the Council and treated like royalty. He considers the representatives from other parts of the country as his noblemen and women. Everyone else lives like peasants, with the exception of the desert people, who keep to themselves and follow their own rules.
What special laws are important to your story world?
Representatives are part of the council who gather at the citadel to make sure all laws in the book passed down from the Ancients are followed. But they have discovered another books exists. And some of them will do anything to get it.
What rights (such as equality) are challenges for your characters?
All Lara wants to do is find The Book of Secrets so she can go home. Everyone wants answers, and they’ll do anything to get them. She has to fight to keep them from getting inside her head because she’s afraid she’ll lose her identity.

Describe one of the worlds where your story takes place.
In My Own Shadow takes place in an alternate reality where Lara’s double is Lyra. They look alike and have similar personalities. Only Lyra has gone off the deep end. She craves power, while all Lara wants is for her life to return to normal. Her world has beautiful places like the Citadel, a city in the clouds, and desolate places like Elusion, a barren wasteland where nothing is what it seems.
What makes this world unique?
Portals can be used to travel to other parts of the world. And sometimes the location of the portal itself is fluid. It moves from place to place.
Tell us about the age of the culture in your story, i.e., are the people part of an ancient civilization, a newly formed group within an established culture, pioneer colonists, etc.
The people who rule are descendants of an ancient civilization. Supernatural beings inhabit the planet (banshees, vampires, etc) along with animals that have special abilities, but the majority of the population is ordinary people.
What food or drink is available to your characters?
Most of their journey they are living off the land, so they eat whatever game is available (fish and something similar to rabbit) When they arrive at the citadel, they eat gourmet foods and sip exotic drinks of all colors. When they join the caravan one of the pilgrims offers Lara fruit he calls Bliss which that her hallucinations.
In what ways was it helpful to have a map (or sketch of one) for your story? (Provide a link to an image, if available).
I didn’t do a map, because they “jumped” all over the planet, both above and below the surface.

What are the physical characteristics of the race/species of your main characters?
All the characters are human. Any special abilities are mental.
What physical differences exist in the way your characters communicate (i.e., telepathy, empathic abilities, etc.) with each other?
Lyra is Lara’s double from an alternate reality. She visits Lara’s subconscious without her knowledge or permission. That’s what gets Lara into trouble to begin with. Her father, Yusel, and her half-brother Rund have similar abilities. They can read other people’s minds at will unless they are strong enough to block them.

Please give us three tips you find helpful when creating a story world:
Creating your own world makes for a fantastic journey. You get to make all the rules. BUT you have to remember to follow them. If you don’t (a) it will trip you up down the road and/or (b) some reader will let you know your error right away!
When you researched for your story setting, what kinds of things did you learn?
I learned about mental telepathy, martial arts, banshees, vampires, underground caverns to mention just a few.
What things should writers avoid when building a science fiction world?
I can’t answer for everyone, but I try to avoid making it too complicated. Readers want to be entertained. Caught up in the story. They don’t want to bog down in details. I have to make sure I describe it in detail without boring my reader.
Share a resource you found helpful when researching for your story.
I read a lot of science fiction, but while I was writing this story I paid special attention to each author’s world building with these things in mind. How much setting up should I do? How do I avoid info-dumping? How can I make it believable in spite of the fact that it’s fantasy?
What’s your advice for writers who want to create a solid background for their story world?
I’m not much of a plotter, but when I was writing one of the settings (the part about the citadel, for example) I made a checklist of important things I needed to remember. When I was in the middle of a scene I referred back to it for continuity.

Born in west Texas and raised in south Texas, Susan shares a 100-year-old farmhouse in a small east Texas town with a ghost who harmonizes with her son when he plays guitar. She is a mother of three and grandmother of five unique and special children. Her family is rich with characters, both past and present. Susan’s grandmother shared stories of living on a farm in Oklahoma Territory and working as a telephone operator in the early 20th century. She learned all about growing up in the depression from her father and experienced being a teenager during WWII through her mother’s eyes.

Susan loves taking her readers through all kinds of adventures. So far, she’s written two books in her It’s About Time series, Not Long Ago and From Now On, and is working on book three. They are time travel adventures about two people who fall in love despite the fact they come from very different worlds. In My Own Shadow is a Fantasy adventure/romance. Xander’s Tangled Web is a YA fantasy with romance.

Want to know more? Visit www.susanaroyal.wordpress.com for a peek inside this writer’s mind and see what she’s up to. You never know what new world she’s going to visit next.

Please leave your email address along with your comment. Susan will draw one name randomly for a free copy of In My Own Shadow.