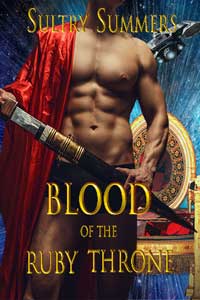 Let’s meet Zera from Blood of the Ruby Throne, a new Science Fiction romance by Sulty Summers. Welcome to Romance Lives Forever. I’m Kayelle Allen, author and owner of this blog. Happy to have you here! Please tell us about your latest book.

Introducing Zera from Blood of the Ruby Throne by Sultry Summers

Age: 20
Gender: female
Birthplace: Planet Seti-Cronus
Profession: High Lady of Seti-Cronus and Alphxorn
Ethnicity: Native of Seti-Cronus
Species (for scifi/fantasy characters): humanoid
Please provide a physical description of your character.
She stands at eye level with many of her military officers, 5′ 8″. She keeps fit and spends several hours a day training. She also practices with both traditional weapons and advanced. She is proud of her long blonde hair, which has only been trimmed, never cut. She wears it braided for practicality. She has blue eyes and has been told they can be quite piercing when she is angry.
Please tell us a little about your character.
Zera had not planned on ruling Seti-Cronus. She prepared for a career as an officer and warrior in her worlds military. That changed with the murder of her twin brother Enos. But Zera honors her oaths. Duty, honor and truth are the principals that guide her. When Enos was killed, the throne became her sworn responsibility and she defended it. During the duel with Lord Sarc of Alphxorn she came to recognize and know the woman inside. She continues to hold her values sacred and but she develops a different view of duty to her people. She knows, she will always be a warrior though Lord Sarc preferred her to play a less active role in the worlds’ defense, which put them at odds, but Zera will not compromise her identity.
Who is the significant other in your character’s life?
Sarc, Lord of both worlds, Alphxorn and now, Seti-Cronus, Zera’s husband. Sarc’s presence fills the room commanding immediate attention. He is a natural leader who rarely needs to raise his voice, his stare is sufficient. When necessary, he is a superb warrior and the only one who has ever bested Zera in a sword duel. His is faithful to his word, principles and peoples.
How does your heroine dress?
Zera, as a warrior prefers to dress as a commander of Seti-Cronus. Until her wedding she owned only three dresses and rarely wore them. Her wedding gown became the first feminine gown she owned or wore. Since becoming co-monarch, she appears in uniform when on duty as Commander Zera in defense of the planet. She varies her wardrobe between long, flowing dresses, comfortable pants and blouses and gowns when appropriate.
What is your character’s family like?
Her younger sister, Terianna, is all the immediate family she has. Her twin brother, Enos, who was a few minutes older, ruled before he was murdered. He was a fair and benevolent monarch and a loving brother. Lornus, their nanny, raised all three royal children and served various other roles to all the children, but to Zera, she is lady’s maid, friend and surrogate mother.
Her mother, who long ago passed when Terianna was born. Her father passed when she and her brother were sixteen.
Is she close to family?
Zera treasures her sister and Lornus. When Enos was killed, she was devastated and became more protective of her little sister. But she came to realize Terianna was less naïve about men than she. Though her mother is dead, she isn’t completely cut off from her. On Seti-Cronus there are occasions when her mother’s spirit transcends and can communicate through the mystical ancestral, heirloom sword passed to both daughters.
I don’t believe the relationship with Sarc can be explained so briefly. Possibly by reading Zera and Sarc’s story, a deeper understanding can be found.
What inner doubt causes your character the most difficulty?
Growing up in a ruling family, as the next in line, but not wishing to rule and remain a warrior placed Zera in an unenviable position. Given power and position as a royal, she earned rank and respect in the military. She is confident in her leadership of warriors into battle, but finds it difficult to resolve the responsibility of wisely governing the planet.
What past event causes your character the most fear?
The death of Zera’s brother terrified her. She felt his passing and the emptiness that followed challenged her strength.
What is your character’s biggest need at the beginning of the story?
Zera’s duty to her people and their security over her personal welfare.
What is your heroine’s biggest personal flaw?
Zera keeps her emotions close and doesn’t share them. She projects a confident and assured façade and never shows fear regardless of the toll on her emotions.
How does your character handle challenges?
Zera has been instructed how a royal and a warrior leads since childhood and that includes meeting challenges head-on. She fails—once.
Who in her life has the power to hurt this character the most? Why?
Lord Sarc, conquer of her world and her heart. Zera is forced to face her own vulnerability as a woman and as a ruler and into an intimate relationship with a man she considered an enemy for most of her life.

I seriously bugged her! I kept whispering in her ear about the duel between myself and Sarc and our story. After I grabbed her attention, I continued to buzz around in her head and told her about the evil pirate lord threatening both worlds. I haven’t completed our stories—yet.

What do you wish your writer had not told others about you?

She could have left out the one time I failed to face a challenge.

Why do you think your writer loves to write?

She loves to escape her world and create havoc in mine!

What do you wish your writer would write next?

The sequel to Blood of the Ruby Throne

What other character from your book do you think your writer should write a book about? Care to tell us why?

Two characters, Leila and Yundar, I know that story, and it screams to be told.

Blood of the Ruby Throne

It’s been awhile, about four years, since I last published. I hope those who have, in the past, read my works haven’t forgotten me. Since then I’ve moved a couple of times, have had a few adventures and have finally found home. My husband, daughter, two dogs and several cats, have settled into a cute little bump in the road town in Eastern Tennessee. Our valley is so tucked away in between mountain ridges our cell phones don’t receive necessitating a landline and satellite everything else. I know for sure the rock wall in our backyard, that serves as property divider, is Civil War era. It’s a great place for my wayward imagination. Seriously, I think we have fae frequenting the backyard and at night I expect to see a UFO land in the hayfield I can see out the front bay-windows.
Though I have kept my website up and running, until about a year ago I’ve had a major writer’s block that I managed to move past. I also made the decision to Indie publish. While I do have one book, Tail of the Dragon, which remains with Decadent Publishing, I have withdrawn my other works. Over the next months, I plan to republish them beginning with Blood of the Ruby Throne. The others will follow after I’ve revisited them. With the assistance of a wonderful editor, I have had the pleasure to work with, you will see them re-released. I also have several new works coming, as well as a series I’ve been working on for a long time.
I’ve missed being an active author and I’m looking forward to hearing from you!
Website www.sultrysummers.com
Blog http://wwwescapeintoromance-dareimagination.blogspot.com
Twitter https://twitter.com/SultrySummers1
Facebook https://www.facebook.com/AuthorSultrySummers/
Pinterest https://www.pinterest.com/sultrysummers/blood-of-the-ruby-throne/
Goodreads https://www.goodreads.com/author/show/2887298.Sultry_Summers
Amazon Author Page https://www.amazon.com/default/e/B0052P1OC6/