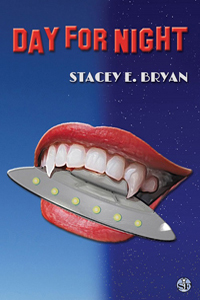 Play Is It True with today’s guest Stacey E. Bryan, author of Day for Night, an urban paranormal comedy. This is a game in which authors answer yes and no questions. They can elaborate on answers as much as they choose.

First, tell us about your book.

Day For Night is a Los Angeles-based urban paranormal comedy. Rife with pop references and scathing commentary on L.A., we follow main protagonist Rae Miller, a 38-40 something wannabe actress who has recently been voted off her reality TV show, as she languishes at a crossroads. She barely has time for self-pity, though, when the unthinkable happens: she witnesses an alien abduction in broad daylight!

Worse, Rae soon discovers that aliens aren’t the only otherworldly beings inhabiting the world, and after escaping a terrifying almost-abduction herself, she succumbs to a sexy Nosferatu’s silky assurances, becoming undead in order to up her alien Ultimate Fighting skills.

While not a strict romance, Day for Night does contain romantic elements. While Rae juggles constant male attention, only one person truly has her heart, although he refuses to have sex with her. I would say the heat level stabilizes at “smoldering” for most of the novel with one brief hot scene which, I although I used the rating PG13, the language that passes between them is definitely R.

Rae is not your usual protagonist since she’s somewhat older and also mixed race, two topics that are significant for anyone living in L.A. and/or trying to survive in The Biz. Some of her life is behind her, and she’s not quite sure how that happened. She’s also resentful that her love-life has stalled, and the dating scene is not only unfulfilling but, she discovers, downright dangerous!

The title Day for Night was taken from Truffaut’s movie title in order to reference the Hollywood environment, although “day for night” comes to mean something very different for Rae after her “Hail Mary” transformation into something…other.

After all, we all have a little bit of Rae inside us: when faced with the incomprehensible, in all likelihood, what would the average person do? Come on, be honest. They’d thank God for Jack Daniels and denial!

Now, tell us Yes or No for each answer below. Feel free to explain any (or none) of your answers.

this is your first book?
Yes. My first published book. But then, who doesn’t have several other novels stuffed away into drawers and boxes? It’s probably best that those never see the light of day.
this book is part of a series?
Yes. It’s standalone, but I feel like I left enough elements hanging somewhat that a few folks might be thinking, “Lucy, you’ve got a lot of ‘splaining to do!”
you lost sleep while writing this book?
Yes, I lost some sleep and pulled my hair out and went crazy sometimes.
you did research for this book?
Yes. Small facts throughout like the names of the moons of Jupiter, what the chemical make-up of chlorophyll is, the definition of antimatter. Stuff that’s good for Jeopardy!
some characters in this book are not human? (pets for example)
Yes. Some characters are definitely not human, and some of them are even yearning to be human.
this book has more than one genre?
Yes. It’s an urban paranormal comedy peppered throughout with romantic, mystery, and action-adventure elements.
you speak more than one language?
Yes. I can speak passable Spanish, having studied it from age 9 throughout college. It’s a crime, though, that I’m so rusty at it.
you grew up where you live now?
Yes. Born in San Francisco, grew up in the San Fernando Valley, lived in NYC for a while, then came back home. On a side note, scarily, I left NYC right before 9/11 happened.
you love to read?
Yes. Reading is almost like breathing oxygen. I need it in a way that makes me super-glad that I never started smoking or took up gambling.
you are never late?
No. I’m often late. It seems to happen when I say to myself, “Oh, I’m making good time with this,” and invariably jinx myself.
you love pizza?
Yes. I think pizza’s one of the best things ever invented in the history of Earth.
you love sushi?
No, I do not love sushi, and I never will.
you have a pet?
No. I only have the memory of my beloved black cat, Mr. Smith, who acted like a dog and followed me everywhere.
Where can we find your book online?
Publisher: Vagabondage Press
Amazon: https://www.amazon.com/Day-Night-Stacey-Bryan/dp/069272611X
Barnes and Noble: http://www.barnesandnoble.com/w/day-for-night-stacey-e-bryan/1123844322?ean=9780692726112
Kobo: https://www.kobo.com/us/en/ebook/day-for-night-5
Smashwords: https://www.smashwords.com/books/view/638135

Stacey was a tomboy growing up, fond of gymnastics, climbing trees with Mr. Smith (her cat) and reading. While on vacation with her family when she was 13, a broken toe resulted in an inability to wear high heels when she got older (or at least not for very long), further alienating her from accepted feminine standards. After receiving her English degree at UCLA, she worked at a dude ranch, for a resume writer in Beverly Hills, in the classified ads department of The Reader, and eventually ended up captioning for the hearing impaired. She has written about tortured artists, suicide, and anorexia nervosa, but has found that light, humorous writing is a lot more fun, thus the foray into aliens and vampires in a Los Angeles setting. When she moved to New York, she found her husband in Brooklyn, and they eventually moved back to L.A. where they both write between bingeing episodes of Breaking Bad, Game of Thrones, and True Detective years after everyone else has already seen them.

4 thoughts on “Is It True: Day For Night By Stacey E Bryan @StaceyEBryan #RLFblog #Paranormal #Comedy”