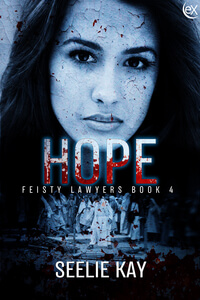 At only age twenty-two, she’s the best Probie the Agency has ever had–until her past catches up with her, leaving her devastated and broken. Without hope.

No one knows what they’re made of until they’re broken. At the tender age of twenty-two, Hope Ali has finally joined the organization of her dreams, the Agency, an elite group of attorneys who go undercover to right wrongs the law can’t. The requirements are stringent, the training exhausting.

After seeking asylum in the United States when she was sixteen, Hope and her father, Sheikh Harun Ali, settled in a quiet Wisconsin town, hiding from those who had placed a price on their heads. Still, she excelled, finishing her university and law school education by the time she was twenty-one.

Now, after breezing through the Agency training program, Hope appears to be indestructible—until she is assigned a simple task during the rescue of an author among the disappeared in the UAE. The task? To distract the woman’s captors until she can be spirited out of the country.

Unfortunately, a member of MISix has other plans. In an attempt to disrupt the Agency’s mission, she tips off one of Hope’s enemies, alerting them to her location. Hope manages to lead the author’s captors on a merry dance, freeing others to rescue her, until she is unexpectedly confronted with a violent angry mob intent on harm.

She is left bloody and broken. No one knows whether Hope’s body or her mind will heal. Suddenly Hope is no longer just her name. It is also the one thing she must embrace to find her new normal.

Where to buy Hope