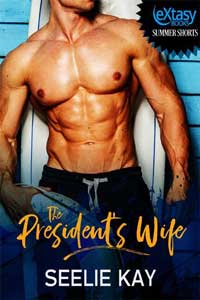 The President’s Wife by Seelie Kay

Genre: erotic, contemporary romance, mystery, thriller
Book heat level (based on movie ratings): R
What happens when one of your best friends, the First Lady of the newly democratic Republic of Lodatia, appears to be an imposter? If you’re criminal defense attorney Julianna Constant, you pursue the truth like a rabid dog, then wage a battle to save your friend’s life.
When criminal defense attorney Julianna Constant travels to Washington, D.C. to join her former college roommate, Marella de la Aerelli, in celebrating her husband’s election as the first president of the newly democratic Republic of Lodatia, she is met with an unpleasant surprise. Her friend of almost 30 years not only looks unwell, she is cold and distant. After Julianna becomes convinced the woman is really an imposter, she attempts to expose the faux Marella by using a secret only she, Marella, and the sitting U.S. President share. In the process, Julianna helps to uncover an international conspiracy to seize control of the new country, using the president’s wife as a pawn in a dangerous and potentially deadly game. Will Marella be rescued before a coup takes place? Or will she become collateral damage in one tiny nation’s fight to be free?
Why did you write this book?
All the news stories about Russia’s alleged interference in America’s presidential elections brought me back to a time in the not so distant past, when other countries fought hard for freedom, trying to break out from under the iron fist of communism. My relatives—who lived in Eastern Europe—were among them. That lead to a whole lot of speculation about how a newly free nation might be compromised and forced to surrender that freedom. The President’s Wife was the result.
What is your favorite genre to read?
I love crime thrillers, like the J.D. Robb series, but I am also partial to erotic romance. In fact, I got through law school by reading steamy romance!
Who is your favorite character from fiction (not including your own)?
Lt. Eve Dallas from J.D. Robb’s books. (Nora Roberts is J.D. Robb.) That woman is fierce, a true avenging angel, someone who fights for truth, justice, and the American way–in the future.
What are you working on at the moment?
I am about to begin working on a book about four former law school classmates who get dumped by their husbands, but band together to fight back, as well as a book tentatively titled That Thing Called Love, which is a guide to love in the 21st Century. It includes all the advice I have given to my millennial son and his friends. Then it’s back to the sixth book in the Kinky Briefs series.
What books will we see from you in coming months?
All of the books I am currently working on should be out before the end of the year.

Where to buy The President’s Wife

The President’s Wife will be available from all other major booksellers soon.