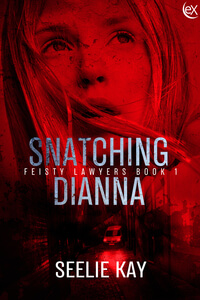 Genre: Romantic Suspense, Contemporary Romance
Book heat level (based on movie ratings): R
The hours are counting down as investigators try to prove that Dianna Murphy has been snatched. Unfortunately, without witnesses and solid evidence, all the police really know is that she is missing.
When suburban Milwaukee law student Dianna Murphy fails to connect with her roommate, there is no real evidence that she has been snatched. Until Law Professor Janet MacLachlan, a former covert agent, discovers a single clue, one that points to a taking by a slave trafficking cartel. In a race against time, Janet recruits her husband, secret agent Cade Matthews, small-town Police Chief David Manders and his wife, criminal defense attorney Julianna Constant, and other law students to uncover the truth. Can they prove she has been taken, before Dianna disappears without a trace?

Where to buy Snatching Dianna