Stressing The Heroine From Hometown Heartache #romance By @mjschiller #RLFblog 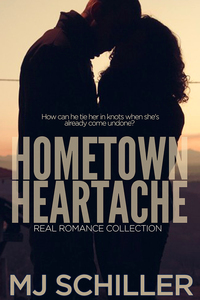 Stressing the Heroine from Hometown Heartache by M.J. Schiller.

M.J. Schiller is a lunch lady/romance-romantic suspense writer. She enjoys writing novels whose characters include rock stars, desert princes, teachers, futuristic Knights, construction workers, cops, and a wide variety of others. In her mind everybody has a romance. She is the mother of a twenty-year-old and three eighteen-year-olds. That’s right, triplets! So having recently taught four children to drive, she likes to escape from life on occasion by pretending to be a rock star at karaoke. However…you won’t be seeing her name on any record labels soon.

Title Hometown Heartache
Genre romantic suspense
Book heat level (based on movie ratings G, PG, PG13, R): R
Nash is trying to make a name for himself in the art world…
But when he meets a realtor to buy a gallery, he is stunned to find Chloe sitting at the table with the man. He has never stopped thinking about her since she disappeared from his life without a trace. Is it too late to win back her love?
Chloe has finally found a way to leave her past behind her…
But her heart leaps out of her chest when she sees Nash. How can he be here? Now…after all this time? On the surface, she pulls herself back together. But underneath she feels she is about to shatter. After remaking herself, how can she deal with being faced with Nash and the life she knew before?
If this chance meeting doesn’t rip Chloe and Nash apart, he will.
Little do they know, someone has been lurking in the shadows, manipulating them all along. If he has his way, the two will never be reunited. Even if he has to take one of them out to ensure it.

This heroine is at a party. Considering her story, describe the party.
Chloe is at an office cocktail party. She works for a large real estate agency so there are big-time clients here, brokers, other realtors, bankers, etc.It’s in the boss’ posh penthouse apartment, white furniture, waiters with trays of champagne, everyone’s dressed up.
How does the heroine feel about being this particular party, and what body language is she displaying that gives it away?
She is totally at home, working the crowd. Mostly the men in the crowd. Only a few of the women will even talk to her. She moves with ease, throws her head back and laughs, does a lot of touching.
Is she more likely to mingle or remain aloof?
Mingle. Definitely mingle.
If she drinks, what is her drink of choice at this party?
She like champagne or wine or mixed drinks, the more lethal the better.
How much drink is her usual?
6-8
The heroine figures out where the hiding places are and then goes there. Is it to hide, to avoid someone, or to go drag a friend back to the party?
She is more than likely sneaking off to be with a man in private.
Is she likely to latch onto a friend and stay with him/her and ignore others, or is she the friend that others latch onto?
She would be floating from man to man, but if anyone was troubled, she would try to talk to them. Although outwardly into playing games, under the surface she is a very sympathetic and compassionate woman.
If someone picked a fight at this party, how is the heroine going to handle it?
Chloe would feel very uncomfortable if a fight broke out and would probably cut out.
Is the heroine the one most likely to get tossed out of the party, or the one who does the tossing?
She would be more likely to be tossed. Either by a jealous female or, if she’s really snockered and getting out of control, the host/hostess.
Will she know when to leave, or stay late and make a nuisance of herself?
She would probably be one of the earlier departees, leaving with someone she didn’t come with.

How does the heroine handle it if the cops or some other authority figure pulls her aside when she was blameless in a situation?
It depends on the night. She would either be meek and mild (she doesn’t really like confrontation) or mouthy. Actually, she’d probably try to flirt with the cops, if they were male.
How does the heroine react to hearing a scream?
Terrifies her.
If she sees someone being assaulted, what is the FIRST thing that crosses her mind?
She would freeze up, thinking back to all the times she was scared growing up. She would want to run away.
If she sees someone being assaulted, what is the FIRST thing she does?
She would go berserk trying to help them. She could not let it go on.
This heroine attempts to rescue someone and realizes that she is in over her head. The odds are against her and there is no way out. She is going to get her butt handed to her. What does she do?
Emotionally buckles in for the ride. She’s been here before, knows the pain, know that she will survive.
The heroine runs into the one person from her past she wanted to avoid. She can’t get out of the situation and must interact with him/her in some way. What does she do?
This actually happens in the book when she runs into Nash. She withdraws within. Hopes to avoid any authentic interaction, but can fake her way through for a short time.
Someone younger than the heroine is in charge of the situation, and they are handling it badly, perhaps bungling things. How does the heroine deal with it?
She would step in to help and kindly explain to the younger person what she was doing and why. She would reassure them that she would have reacted the way they did when she was younger.
The heroine is in physical pain but must bear up under it and keep going. What does she tell herself in order to get through the situation?
I’ve been here before. I can take it. No one will destroy me.
What mentor’s words come to mind in a bad situation?
She would be thinking of things Nash’s mom said to her. Or perhaps her dad.
What lesson from her past gets her through a stressful situation?
Surviving her past is what gets her through.