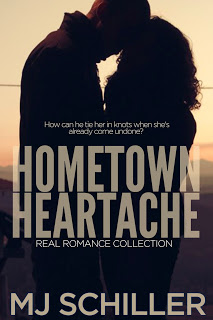 Our guest author today is giving away an eCopy of Blackout to one random commentor. Please leave your comment below for your chance to win.
Every hero has a story. He has a background, a history, and a past. This interview allows us to meet a hero and get to know him better, by focusing on how he handles being relaxed, as well as how he handles stress.

M.J. Schiller is a lunch lady/romance-romantic suspense writer. She enjoys writing novels whose characters include rock stars, desert princes, teachers, futuristic Knights, construction workers, cops, and a wide variety of others. In her mind everybody has a romance. She is the mother of a twenty-year-old and three eighteen-year-olds. That’s right, triplets! So having recently taught four children to drive, she likes to escape from life on occasion by pretending to be a rock star at karaoke. However…you won’t be seeing her name on any record labels soon.

Title Hometown Heartache
Genre Contemporary Romantic Suspense
Book heat level (based on movie ratings):
PG13
Nash is trying to
make a name for himself in the art world…
But when he meets a realtor to buy a gallery, he is stunned
to find Chloe sitting at the table with the man. He has never stopped thinking
about her since she disappeared from his life without a trace. Is it too late
to win back her love?
Chloe has finally
found a way to leave her past behind her…
But her heart leaps out of her chest when she sees Nash. How
can he be here? Now…after all this time? On the surface, she pulls herself back
together. But underneath she feels she is about to shatter. After remaking
herself, how can she deal with being faced with Nash and the life she knew
before?
If this chance
meeting doesn’t rip Chloe and Nash apart, he will.
Little do they know, someone has been lurking in the
shadows, manipulating them all along. If he has his way, the two will never be
reunited. Even if he has to take one of them out to ensure it.

Every hero has a story. He has a background, a history, and a
past. This interview allows us to meet a hero and get to know him better, by
focusing on how he handles being relaxed, as well as how he handles stress.

This hero is at a
party. Considering his story, describe the party.
Nash would enjoy a big party, but would prefer just hanging
with his family and a few friends.
How does the hero
feel about being this particular party, and what body language is he displaying
that gives it away?
When he’s with his family, he’s relaxed. He would be sitting
on the couch, one arm resting on the top, with his back in the corner, totally
engaged in the conversation he is having, turned toward the speaker, one leg up
on the couch a little. He is an artist and so his conversation would be thoughtful,
cerebral, intelligent. But Nash was also an athlete in high school so he is
strong and physically fit and could talk sports. He would avoid politics unless
it was a subject he was particularly passionate about. He was popular in high
school, but not Mr. Popularity. He is a stand up guy, someone you could count
on in a crisis.
Is he more likely to mingle
or remain aloof?
With family he’d mingle. At a bigger party he would mingle
some, but would limit it to a handful of people.
If he drinks, what is
his drink of choice at this party?
Beer, craft or otherwise. Prefers a basic beer.
How much drink is his
usual?
Depends on the night and how long he is out. On average,
three or four.
The hero figures out where
the hiding places are and then goes there. Is it to hide, to avoid someone, or
to go drag a friend back to the party?
He wouldn’t hide or avoid someone, at least not for long. If
someone went missing, though, he’d know where to find them because he’d
understand that desire. He may bring them back to the party or stay and talk
with them there.
Is he likely to latch
onto a friend and stay with him/her and ignore others, or is he the friend that
others latch onto?
If he gets involved in a conversation with someone, he
doesn’t feel the need to leave it in order to talk to everyone. He’d rather
miss out on saying hi to someone than miss out on a good conversation, although
he’d regret not getting to talk to everyone a little.
If someone picked a fight
at this party, how is the hero going to handle it?
He would try to negotiate the situation, but if he needed
to, he’d be fine with throwing someone out if they were making trouble.
Is the hero the one most
likely to get tossed out of the party, or the one who does the tossing?
He’d be the tosser, not the tossee.
Will he know when to leave,
or stay late and make a nuisance of himself?
He will know when to leave, but will stay late and help
clean up.

How does the hero handle
it if the cops or some other authority figure pulls him aside when he was
blameless in a situation?
He’s pretty calm about it, believes that it will all work
out, that the cops will be reasonable and listen to him.
How does the hero react
to hearing a scream?
Nash would go to find out who was in trouble and try to help
them. He’d take along his brothers if he thought he needed to.
If he sees someone being
assaulted, what is the FIRST thing that crosses his mind?
I need to step in and help this person.
If he sees someone
being assaulted, what is the FIRST thing he does?
He steps in to defend them.
This hero attempts to
rescue someone and realizes that he is in over his head. The odds are against him
and there is no way out. He is going to get his butt handed to him. What does he
do?
Takes it like a man.
The hero runs into
the one person from his past he wanted to avoid. He can’t get out of the
situation and must interact with him/her in some way. What does he do?
His jaw would be tight and conversation would be clipped.
Someone younger than
the hero is in charge of the situation, and they are handling it badly, perhaps
bungling things. How does the hero deal with it?
He would let them try to handle the situation themselves,
but if they gave a sign of needing help he’s be there to do his best to handle
it.
The hero is in
physical pain but must bear up under it and keep going. What does he tell
himself in order to get through the situation?
I’ve just got to hang on and get through this.
What mentor’s words
come to mind in a bad situation?
He’d probably think of something his mom told him. He looks
up to her a lot. It probably would be along the lines of “walk a mile in
someone’s shoes.” He would try to see things from their viewpoint.
What lesson from his
past gets him through a stressful situation?
His time without Chloe was the worst period in his life. He
would tell himself if he could get through that, he could get through anything.