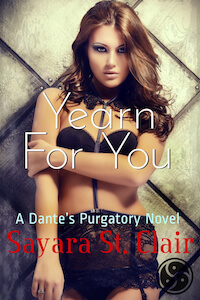 Yearn For You by Sayara St Clair

Dante has been Erica’s savior since she was a child, protecting her from others, wiping her tears, making her feel worthy. Until, as the years passed, she began to feel something new…and a girl’s crush became a young woman’s unyielding passion. Though she ran away to Paris after Dante unknowingly broke her heart, even distance couldn’t quell Erica’s desire. Because she knows Dante well, knows what he’s capable of doing for a woman…and knows her submissive needs match Dante’s deep dominance perfectly.

Dante’s in trouble. For years he’s kept his burning ache for his best friend’s sister firmly in check. But now Erica’s back in the States, more gorgeous than ever. Worse, she wants to learn about BDSM—and she’s determined to have Dante as a teacher. He won’t let her near the club he co-owns with her brother—Chris would kill him—but he’ll “train” her at home. When he’s done, Erica will want nothing to do with the lifestyle. And hopefully her crush on Dante will be diminished…for both their sakes.

But Erica proves to be far more resilient that he’d ever dreamed, and Dante’s plan backfires in spectacular fashion, driving her straight into the clutches of someone far worse than another Dom. Someone dangerous, someone from his past…who’s going to make Erica pay for Dante’s sins.

Please tell me about yourself.
Age: 30
Gender: Male
Birthplace: Italy
Profession: BDSM club owner
Ethnicity: Italian
What do you look like? I’m six foot three. I have olive skin; black longish hair; dark eyes; and a typical Roman nose that’s a little crooked thanks to it being broken by my best friend, Chris, when we were kids.
I returned the favour, so we’re even. Or should I say, evenly crooked.
Who is the significant other in your life? The lovely, Erica Whitfield. Younger sister of the aforementioned, Chris. A fact that kept Erica and I apart for many years. And caused unimaginable problems for all of us.
If we could only hear your voice (but not see you) what characteristic would identify you?
I think it would be my Italian accent. I still have it even though I’ve lived in the US since I was young. Just between you and me, Erica loves when I speak Italian to her. Says it makes her amorous. So of course I do it often. I’m all for making Erica amorous.
What is your viewpoint on wealth?
Coming from dirt-poor beginnings, I have a great appreciation for the comfort, safety and security wealth provides. When we moved to the US, my mother was employed as a live-in maid for Erica’s grandparents. My mother, myself, Erica and Chris were in a situation that I desperately wished I could change. Being unable to do so, plagued me. I never again want to be in the circumstance where I’m financially disadvantaged or powerless.
Are you involved in your community?
Yes. We raise money by holding special events at the club. Our most recent one was Harem night. Club members pay to enter the activities or competitions and the proceeds go to local women’s shelters. There are other things we’re doing now, but I can’t divulge any details because my writer doesn’t like spoilers.
What secrets do you know about people around you that you do NOT share?
Owning a BDSM club means I know about the kinks and fetishes of all my members. I’m also privy to things like their fears, weaknesses and triggers. I’ve seen some people at their breaking point, some totally broken down. I’ve seen them at their strongest, and when they reach that place to which many aspire—which is when they fly. I share none of it with anyone outside the club. And within the club, I only share what is necessary to ensure the safety of my members.
What would you like to tell your writer?
I’d like to tell her that I’m unbelievably happy with the way everything turned out. However, I’m not entirely certain she needed to put us through the wringer in such a spectacular fashion so we could find our happy ending. But since she brought Erica back from Paris, gave me a second chance, and let me finally be with the love of my life—I’m not holding any grudges.
What would you like people who hear your story to know?
The most important thing I’ve learned. And let me tell you, I learned it the hard way. I learned that no matter what obstacles there are to love, you must never ignore that love. Or trivialise it, or suppress it. It is a precious thing and nothing, and I mean, nothing should ever be put before it.

Where to buy Yearn For You

If someone told a young Sayara St Clair that one day she would be an erotic/paranormal-romance-writing Aussie expat living in Thailand, she would have snort-laughed and yelled, “You. Be. Crazy!”
If someone told her the same thing now, she would not yell, only nod solemnly. Because that actually happened.
Sayara has a science degree, with majors in both microbiology and biochemistry. Working in the fields of serology and tissue banking, she got to do lots of cool and sometimes slightly weird stuff. She was employed as the manager/buyer for furniture retail stores, where she had a chance to unleash her inner interior decorator. (Interior design is one of her great passions.) And for a time, she taught English to students in Asia. (Hanging about in a roomful of extremely loud, pint-sized humans is not one of her great passions.) She has written: ads for TV, print and radio; real estate brochures; website copy; and a screenplay. Now she’s writing fiction and has discovered it’s her favorite thing to do. She’s also learned that writing sultry romances is so much more fun than writing dry old scientific journal articles. No one has sex in scientific journal articles. Not the ones she wrote anyway.
When not writing, she may be most commonly found in a horizontal position reading, in the kitchen baking, in the garden planting, or somewhere else singing at the top of her lungs. She loves music and is prone to spontaneous bouts of dancing.
With regards to vampires and chocolate: she bites one on a daily basis and has had a lifelong obsession with the other. And she’s not telling which one’s which.
Website www.sayarastclair.com
Blog http://www.sayarastclair.com/wp/blog-2/
Twitter http://www.twitter.com/sayarastclair
Facebook http://www.facebook.com/sayara.stclair
Goodreads http://bit.ly/GoodreadsSSC
Amazon Author Page http://bit.ly/Sayara
Newsletter http://www.sayarastclair.com/wp/contact/

2 thoughts on “Introducing Dante Caffarelli From Yearn For You, By Sayara St Clair @SayaraStClair #RLFblog #Romance”