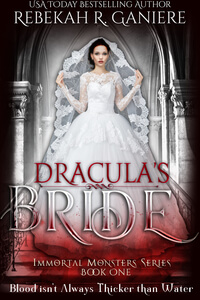 Welcome to Romance Lives Forever. I’m Kayelle Allen, author and owner of this blog. Let’s play Is It True with today’s guest, Rebekah R Ganiere, author of Dracula’s Bride, a Gothic Romance Paranormal Romance. This is a game with yes and no questions. Writers can elaborate on answers as much as they choose.

Mina wants to escape her sheltered life. Blue needs a fresh start. Together they might find the satisfaction they both crave.

Mina has spent the last five years being house servant to her three older siblings- Arthur, Quincey, and Lucy, under the thumb of her volatile Admiral father, But her entire life is changed in an instant–when she is almost run over by a mysterious black horse-drawn carriage.
Count Vlad “Blue” Draugr flees his castle in Transylvania after an unspeakable act draws too much attention his way. Now secluded in his rural English estate, he finds himself drawn to a most unlikely creature. The sweet and innocent Mina Van Deem from the neighboring estate.
Unable to get her out of his thoughts Blue wants nothing more than to make her like him – a vampire. But Blue’s thirst for blood keeps him from fully trusting himself to keep his fangs off her neck.
In an act of desperation, Mina runs from her dysfunctional family and escapes to London. There she finds more than solitude in the sooty city streets that are alit with whispers of a string of recent bloody murders–she finds Blue, waiting for her, tempting her, stalking her. And as she falls deeper under his spell, Mina learns that some creatures lying in the shadows of London’s underbelly are more enticing than she ever thought possible.

Those who crave the dark passion of Dracula and Crimson Peak, Dracula’s Bride will be your new favorite.

this is your first book?
No. Dracula’s Bride is about my twenty fifth book. I used to keep track of exactly how many I’ve written but I am currently working on 7 books at the same time so I’ve lost count. Haha.
this book is part of a series?
Yes. Dracula’s Bride is the first book in my Immortal Monsters Series. The next book will be Frankenstein’s Bride. There will also be a Jekyll and Hyde, Wolf Man and Phantom of the Opera. We’ll see if I do more than those.
you lost sleep while writing this book?
Only a little. I have been writing long enough now, 5 years, that I know when it’s time to quit for the night. That doesn’t mean my characters don’t shake me awake first thing in the morning and scream for me to get up and tell their stories.
you did research for this book?
Yes. Because it takes place in Victorian London and areas outside of London I needed to do a lot of research on railways at the time, electricity, mail, military, clothing, etc. The clothing was the hardest to find what I was looking for.
some characters in this book are not human? (pets for example)
The main character Blue – Vlad – has wolves. They are more minions than pets though.
this book has more than one genre?
Yes it does. It is a Paranormal Romance but also a Gothic Romance. A retelling of the Classic Dracula is has all of the feel of a Gothic Romance and the fun of a Paranormal Vampire romance as well.
you speak more than one language?
Nope. I wish I did. I am going to take a simple German class this fall, just for fun. Mostly because my best friend is from Germany and she knows English but her three little girls came to visit this summer and they don’t.
you grew up where you live now?
Nope. I grew up all over. Born in California. Young child in Connecticut. Lived in Virginia until Jr. High. Then moved to Boise, Idaho for jr. high through high school and some college. I currently live in California again. I’ve also lived in Hawaii, Utah, Maryland and a couple other places.
you love to read?
I do love to read. I love to read all kinds of things. Right now I really love to read books on writing. But my favorites are Paranormal Romance, Fantasy, Sci-fi, YA.
you are never late?
I am no longer late. When I was younger I used to be late all the time but for some reason after I had kids I stopped being late. Probably because my kids are actors and we have to be at auditions at a specific time and if you are late they call your agent to ask where you are. It only took that happening a couple times before I became embarrassed enough to make sure I was on time.
you love pizza?
I DO love pizza… which is super, super, super hard because I can’t have gluten or dairy anymore.
you love sushi?
Absolutely!! If I could only eat one thing for the rest of my life it would be Japanese food. Yummy!
you have a pet?
I do not have A pet. I have a German Shepherd named Harley Quinn, a tortoise named Harold, a Bearded Dragon named Firestar, and 5 guinea pigs. Sweet Pea, BB8, Bugsy, Captain America and Winter Soldier.

Where to buy Dracula’s Bride