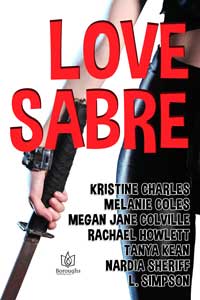 Rachael Howlett, welcome to Romance Lives Forever. I’m Kayelle Allen, author and owner of this blog. Happy to have you here! Please share your goodies with our readers.

By Rachael Howlett
I’m no Queen of the Desert, but with my royal sweet tooth, I’m a Queen of the Dessert.
The term ‘dessert’ applies to many sweet foods such as biscuit, cake, ice cream, pie, and pudding; the common factor being they’re traditionally served at the end of a meal. But, who said a dessert can’t be first, second or all your meal? No one!
I’ve had a life-long love affair with these five iconic Australian desserts:
First course
Ask an Australian to name their favourite biscuit and 99.8% of the time it’s the Tim Tam. This delicious chocolate-coated biscuit is such a culinary icon that it’s hard to believe Tim Tams only arrived on Australian shelves in 1964. And what’s not to love about a layer of smooth cream sandwiched between two biscuits? Don’t believe me? Look how fast Hugh Jackman convinced Oprah.
In that clip, Nicole Kidman mentions the Tim Tam Slam. This is one of the BEST things about eating these biscuits.
Bite off opposite corners of the Tim Tam and submerge one end in a hot drink (usually coffee or tea).
Think of the chocolate biscuit as a straw and use it to suck up the liquid.
With the interior biscuit softened and the outer coating melting, the trick to becoming a Slam Master is eating the Tim Tam before it explodes into your cup.
Second course 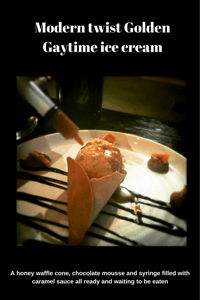 Like a Berliner but only better, the Hot Jam Doughnut is a delicious deep, fried crispy doughnut—fluffy inside with oozing thick strawberry jam. Dusted with sugar and usually served in a white paper bag, this doughnut should be eaten hot and fresh, and straight from a hot jam doughnut van.
One of the most famous places in Melbourne to eat a doughnut is at the Queen Victoria Market, where the American Doughnut Kitchen has been operating since the 1950s. Although, the popularity of this hot jammy dessert means you can find a van at most outdoors events. Look for the queues of people standing around with a bag of steaming doughnuts warming their hands.
Top tip—always check your face after you finish. It’s likely you’ll need to wipe sugar off the tip of nose after diving face-first into the bag.
Third course
No one really knows exactly how the Lamington came about other than its link to Lord Lamington, a Governor of Queensland in the late 19th century. However, its place in the hearts and mouths of Australians is firmly ingrained through ‘Lamington drives’—where schools and charity groups fundraise by selling lamingtons by the half dozen.
Traditionally, a Lamington consists of sponge cake squares dipped in chocolate and rolled in desiccated coconut (see this classic recipe from Margaret Fulton in Vogue Australia). Other variations include raspberry jam or cream spread in the middle.
Lamingtons are so well loved that we even have a day dedicated to celebrating cake. National Lamington Day is 21 July.
Fourth course
In Australia, we like to scream for a Golden Gaytime ice cream. Think toffee and vanilla flavoured ice cream, dipped in chocolate and then coated in crushed biscuits. Modern versions include a Sanga (or ‘sandwich’), Pina Colada and the Unicorn.
But maybe you’d like a Golden Gaytime doughnut, fried bao or even a burger? Restaurants and cafes have developed their own twist on the classic.
I’ve taken one for the team trying the house-made Gaytime at the Ripponlea Food and Wine Store.
Whichever way you eat it, follow Street’s slogan and eat one with a friend because It’s hard to have a Gaytime on your own. 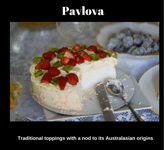 Fifth course
Named after the Russian ballerina Anna Pavlova who toured in the late 1920s, this quintessential Australian dessert isn’t without its controversy—chiefly that our neighbours across the sea (New Zealand) also claim to have invented this dish.
But in the spirit of sharing (as we have with the success of Crowded House, Jane Campion and Russell Crowe), the Pavlova is an Australasian dessert made from a base layer of meringue, followed by generous amounts of cream, and topped with seasonal fruit (mostly a mix of berries, passionfruit and kiwi fruit).
Summer parties never seem to start until someone brings out a Pav.

Genre Contemporary Anthology
Book heat level (based on movie ratings): Various (this story – G)
The Fates have found a new way to get people together, and seek to nudge Hayley Montgomery into the path of her dreamy new work colleague, Magnus Jones. Flummoxed by their encounter, Haley must find it in herself to reach for what she wants and fulfill her destiny.

Where to buy Love Sabre

Rachael Howlett writes contemporary women’s fiction with a healthy dose of humour, love and adventure. Passionate about books, travel and pop culture, Rachael has had roles as an editor, arts reviewer, and Scottish castle underling. Currently she works in The Thick Of It of Utopia while she writes her first romantic comedy novel. She lives in Melbourne because she loves coffee, comedy and winter.
Twitter https://www.twitter.com/that_rachael
Facebook https:// www.facebook.com/RachaelHowlettAuthor
Instagram https://www.instagram.com/worldaccordingtorach