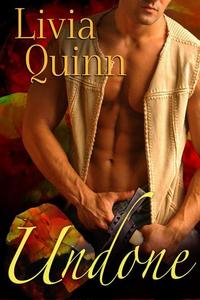 Livia Quinn is a DC native who lives on the bayou in Louisiana. She met her hero, Cass McKay, while listening to Jesse Cook’s “Breathing Below Surface” and Bonnie Raitt’s “I Can’t Make You Love Me if You Don’t”. When I turned down a narrow street there he was, in the flesh leaning against the wall of Elektra’s shop (well, a store on the corner on my route, actually but still,) all tawny and golden, asking for my help to get his woman back. I could tell he was desperate so… what else could I do? Undone was born.

Title Undone (A Sexy Romantic Adventure)
Genre Contemporary Romance
Author Livia Quinn
Book heat level (based on movie ratings): R
When Aussie gem hunter Cass McKay appears unexpectedly on Elektra’s design shop doorway, her reasons for sending him away a year ago suddenly seem…complicated, their passion for each other and the secret, intricately entwined.
One year ago on the eve of Carnival, Elektra broke their engagement after the “Blood” opal was stolen. No one steals from Cass, especially not when it cost him the woman he loved.
Elektra’s reason for breaking their engagement has now come back to bite her. Cass intends to return to Brazil, putting himself in danger to retrieve her opal, in hopes that Elektra will give their relationship another chance.
Staying out of Cass’ bed isn’t an option if she’s going to keep him safe, but coming clean might make things worse. Elektra is walking a tightrope between desire and deceit, and the truth will endanger not only their love, but their lives.

This hero is at a party. Considering his story, describe the party.
A pleasant crowd of friends and family, couples sharing good food, drink and dancing to the Latin beats, from the slow sultry rumba and tango to the lively salsa
How does the hero feel about being at this particular party, and what body language is he displaying that gives it away?
He loves these people and especially the woman he hasn’t seen in a year. He’s banking on the atmosphere and the music to draw her in. He cues the music and begins to dance, his hips and eyes telling her the slow deliberate steps of their favorite dance how he feels.
Is he more likely to mingle or remain aloof?
Oh, Cass is a mingler, an extrovert who is well-liked and at home in two countries, Brazil and Australia. He tries to remain aloof with Elektra but the beat of the music is making him crazy. Hopefully, she’s not unaffected.
If he drinks, what is his drink of choice at this party?
Cass isn’t one to over indulge. But tonight he’s intoxicated by her presence and he goes a bit too far.
The hero figures out where the hiding places are and then goes there. Is it to hide, to avoid someone, or to go drag a friend back to the party?
When Elektra runs in the heat of the dance, he knows where to find her. And there’s hell to pay. He’s determined to make her admit her feelings but she’s well aware of the cost of giving in after all this time.

How does the hero handle it if the cops or some other authority figure pulls him aside when he was blameless in a situation?
Cass is an even-tempered guy who has no trouble talking his way in or out of situations.
How does the hero react to hearing a scream?
Well, like a hero. He would act before considering the danger to himself.
What does he tell himself in order to get through the situation?
If he can get the opal back and Elektra back in his arms, his world will be right again.