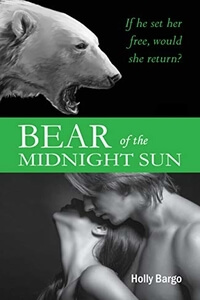 Holly Bargo, welcome to Romance Lives Forever. I’m Kayelle Allen, author and owner of this blog. Happy to have you here! We’re excited to find out more about your heroine, but first, tell us about the book.

Bear of the Midnight Sun by Holly Bargo

Genre Paranormal Romance
Book heat level (based on movie ratings): R
After a thousand years, immortal polar bear shifter Sindre finally finds his mate—on a talk show. In the city where anything goes, an impromptu wedding is just a taste of what’s to come. Startled into going through the ceremony, Miranda can’t stop the big, virile man from staking his claim on her and releasing her bear. Sindre can’t believe his good luck and will do anything to keep his mate at his side, up to and including taking marital advice from Atlas Leonidus. An independent woman with a successful career, Miranda melts at his touch and shuns his control, except she can’t control her bear.

Know the Heroine from Bear of the Midnight Sun

Here are some fun questions to help us know your heroine.
It’s late, she’s bored. What does she do?
Miranda prefers a quiet kind of life, so she picks up a book and reads. Or takes a nap. Naps are good.
What kind of food would she impulse buy if hungry?
Ice cream. Who doesn’t like ice cream?
Describe the kind of clothes she prefers to wear.
Comfortable, tailored clothing, like jeans and a button-down shirt or soft sweater.
Does she know how to fix things?
Miranda’s mother prizes independence above all things, and insisted she learn how to perform basic household repairs. As a woman living alone, she sees the sense in having that kind of practical knowledge. She mows her own yard, too, although gardening doesn’t float her boat.
She tried to do something and it went badly. Tell us about it.
Miranda would love to be a gourmet cook, but hasn’t got the knack. For a small dinner party, she once attempted a soufflé from a venerable French recipe. She followed the instructions to the letter, but it somehow managed explode. Soufflés collapse, but they don’t explode. Except hers did. She ordered pizza delivery instead, and, after the party, spent three hours cleaning out the burned splatter from her oven. She vowed never to attempt anything like that again.
How does she act around children she doesn’t know?
Miranda is uncomfortable about children, having never really interacted with them since she was a child herself. In fear of saying the wrong thing, she holds herself aloof to observe them.
What is she like first thing in the morning?
Miranda’s ambivalent about mornings, although her cat Gonzo ensures she rises at the proper hour to ensure he receives his breakfast. She prefers to take her mornings with a cup or two of her favorite caffeinated beverage.
How does she act around people who don’t know what she is?
Like many authors, Miranda’s an introvert and reserved. Definitely not the life of the party, she’ll join the other wallflowers to watch and listen to the other guests.
Will she let a worker handle things or do it herself?
Having grown up the daughter of a fiercely independent mother, Miranda learned to handle her own problems. In Bear of the Midnight Sun, she learns that she can’t necessarily handle her own problems and that needing help doesn’t necessarily imply weakness.
Earrings/piercings/tattoos or unadorned skin?
She has no tattoos or body piercings, although she does have pierced ears and prefers more delicate earrings that enhance rather than make a bold statement. With her mother, a lawyer who chews razor wire for breakfast, Miranda’s tastes toward bodily embellishment tend to be conservative.
Personal vehicle or public transport?
Personal vehicle, definitely. In small town and rural America, public transport often doesn’t exist. A privately owned car or truck is necessary.
Recycle or toss?
Miranda will recycle, as long as it’s not too inconvenient or costly. Having had an irregular income for most of her adult life, she measures cost against environmental responsibility carefully before making a purchase. Convenience is definitely a factor in her decisions to recycle, repurpose, or reuse.
Thanks for helping us get to know your heroine!

Where to buy Bear of the Midnight Sun

Holly Bargo is the author’s pseudonym and really did exist once upon a time as a fondly remembered, temperamental Appaloosa mare. Holly writes fantasy and romance and loves combining the two for exciting, sizzling stories touched by magic.
Holly and her husband live on a hobby farm in southwest Ohio with an ancient horse, elderly llama, clowder of cats, and timid Great Dane named after Catwoman. They have two children, one enrolled in college and the other serving in the military.
Website https://www.henhousepublishing.com
Blog https://www.henhousepublishing.com/eggs-the-hen-house-blog
Twitter https://twitter.com/HollyBargoBooks
Facebook https://www.facebook.com/HenHousePublishing1/
Pinterest https://www.pinterest.com/henhousep/
Goodreads https://www.goodreads.com/author/show/12756589.Holly_Bargo?
Amazon Author Page https://www.amazon.com/Holly-Bargo/e/B00JRK6VGQ/