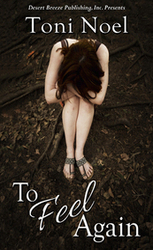 Today’s featured book is To Feel Again by Toni
Noel.

Title To Feel Again
Genre Romantic Suspense
Author Toni Noel
Book heat level (based on movie ratings): R
Reclusive widow Jenny Hamilton retreats to her
modern cabin in the Eastern Sierras, content to be cut off from the outside
world, the victim of an abusive marriage that leaves her terrified of men.
She spends her time writing, weaving and tending
her animals until Tom Driscoll washes up in the creek below. Somehow Jenny
finds the strength and courage to rescue the unconscious man and nurse him back
to health while slowly falling in love with him.
Then a burly intruder intent on revenge for crimes
her late husband committed arrives and attempts to rape Jenny. Tom prevents the
rape and saves her from harm, but the terrifying incident traumatizes her and
all her earlier fears of men come flooding back. Convinced she can never trust
another man, she orders Tom to leave, effectively shutting him out of her life.
Can Tom soften Jenny’s hardened heart and teach
her to feel again?

Toni Noel’s love of books started in childhood, when her
mother first read The Five Little Peppers and How They Grew to her. She
helped start church libraries in two rural Tennessee towns and appeared before
the City Planning Commission and the San Diego City Council to urge a library site
be purchased. As the neighborhood spokesman for the new library the City
Councilman for her district invited her to turn the second shovel of dirt at
the groundbreaking for the new library. Toni’s fondest dream, to see one of her
safe-haven-for-the-heart novels available for checkout was realized when
Desert Breeze Publishing released Law
Breakers and Love Makers in
print form.