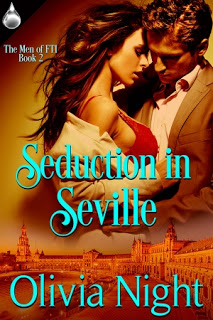 But do I have to? Making research less painful.

by Olivia Night
When I started my first novel, I knew immediately that I was
going to need to do some a significant research. I knew nothing about the arms business,
Sierra Leone or it’s vibrant customs and culture. Research was not something I had
considered a necessity before I got serious about writing novels. But now it’s one
of my favorite parts! (Dork Alert!)
My second novel required even more research. As a Type A person
I had to be sure to that what I was writing was accurate. One research topic I was
not quite prepared for was delving into the psychology of victims of abuse. The
heroine in Seduction in Seville, Madison Lockwood, survived a horrific situation
and it was important to me that I tell her story correctly. It felt like a balancing
act at times when writing her and her growth through the novel.
Poorly researched novels stick out like sore thumbs and can sometimes
communicate to the reader that the author just really didn’t care all that much
to get things right, even if that isn’t the case.
Research can a dreaded task when writing, so I compiled list
of research tips that I swear by. Enjoy!
Tip #1 – It is totally okay to type “(need information here)” in your manuscript as you are write instead of stopping at that moment and finding the answer you need. I do this quite frequently, especially if I am on a roll – so to speak. This leads naturally to the next tip.
Tip # 2 – Commit and then sit down and do the research. It’s much harder to get a clear picture of political environment of say, Tunisia, if you research five minutes here and ten minutes there.  Tell yourself you are going to research the hierarchy of wolf dens for thirty minutes and research not only what you need but as much as you can.
Tip # 3 – Notes, notes, notes.  Just doing a copy/paste into a new document isn’t going to actually give you the knowledge that you need to write. Or write well. Of course you want the information on hand when you need it but, you need to understand the information as well. At this point in our lives we are all pretty aware of how we best learn. Do that. Because it’s important to…
Tip # 4 – Do more than regurgitate information. It is pretty easy to spot information within a novel that is simply reworded or paraphrased from somewhere else. As the author of your book or series it’s important to have a real understanding of what you are writing about.
Tip # 5 – Google Earth! I have spent sooooo much time on Google Earth. I want to get even the smallest details correct. This includes street names, landmarks and restaurants. Recently I used it to chart my hero and heroine’s trip from Hungary to Scotland. I wanted to use the correct routes, with accurate time traveled as well as places they could stay that were off the beaten path (because people on the run need to be off the beaten path).
Tip # 6 –  Ask questions. When I was researching human trafficking laws within the European Union tons of questions came to mind. I spent the time and researched to find those answers. Then when I was writing about the human trafficking ring in my novel the words just flew off the tips of my fingers. Of course, a lot of what I learned was not included, but that didn’t matter. I felt confident in my knowledge as opposed to nervous that I may be getting something wrong.
Research may not be the most favorite pastime for authors, but it’s a necessary evil to create a well written book. Plus, when you spend time on google earth tell the kids and hubby or wife to leave the room and you can pretend you’re taking a mini vacation!

In a hospital in Seville, Spain, Patrick Kane lies in a coma. Ambushed and shot while protecting a friend, he fights to survive.
She never thought she would see him again. Patrick, the man who’d brought her back.
Eight years ago, Patrick Kane, a joint partner in Fairlane Trade International, descended into a basement of horrors. That horrible day he rescued many women, but one he would always remember. Her beautiful doe eyes filled his dreams and haunted his nightmares.
Madison Lockwood, a nurse, has struggled to put her past behind her, trying to forget the time she spent in captivity. But she recognizes the man who rescued her and brought her out of that terrifying reality. She owes him her life. Patrick is gravely injured, and Madison vows to see him through.
When Patrick opens his eyes, he instantly knows that he made a mistake leaving Madison after freeing her from the clutches of a human trafficking ring. She is meant to be his. As Patrick tries to win over a wary Madison, the past they both thought was gone for good comes back with a vengeance. One by one, the survivors of the horrific ordeal are being murdered. Patrick knows that Madison will be next if he doesn’t protect her.
Together they must fight for their survival. Seduction In Seville, book two in the Men of FTI series, is a tale of redemption, murder, new beginnings, and love that takes the reader on a wild, exotic ride.
Title: Seduction in Seville, The Men of FTI Book Two
Genre: Romantic Suspense
Author: Olivia Night
Book heat level (based on movie ratings):  R

Title: Seduction in Sierra Leone, The Men of FTI Book 1

Genre:  Contemporary, Romantic Suspense
Book heat level (based on movie ratings): R
In the mangroves of Sierra Leone, two strangers raised a world apart find themselves inextricably connected. Seduction in Sierra Leone, the first in a series of three novels, is a fast-paced tale of murder, lust, and love that transports the reader to a foreign and mysterious world of danger.
Aislinn Salameh, an American relief worker, is searching for purpose in her self- imposed lonely world. The stranger who enters her village on a blistering hot day seems more animal than human. She knows she should stay far away but can’t stop herself from being drawn to the mysterious man.
Brandt Fairlane is haunted by the sins of his past. Detached from others, Brandt has spent his life alone. His line of work is too dangerous for the luxuries of love and family.
When Brandt sees Aislinn and her haunting eyes, he knows he must possess her. But when Brandt’s past comes back from the dead and Aislinn is caught in the crossfire, it is up to him to keep her safe. In order to survive, they must learn to rely on one another. As they run for their lives, the heat between them becomes undeniable. Now, Brandt must not only protect Aislinn from a madman committed to stealing her away, but he also must protect her from himself. Because if Brandt steals her body and her heart, he’ll never let her go.

Olivia Night, a fictional character herself, has always been an avid reader and writer. She found the romance genre in college and has never been able to get enough. One sleepless night, the main characters of Book One in her Men of FTI  series sprang from her head fully formed. They demanded she tell their story; so she did. As they revealed themselves, so did two other intriguing characters. Those characters convinced her to give them their own books because their stories were worth telling too. And so Olivia suddenly became a romance author. When Olivia is not writing, she has the best job in the world, which, too, will remain a secret. In her free time, she reads, write, drinks wine, or is, most likely, out emulating Buffy the Vampire Slayer. Olivia lives in one of the most diverse and vibrant cities in the U.S. — Baltimore. She lives with her cat, which she is convinced was a gladiator in his past life. Olivia plans to continue being awesome at this thing called life. Really, that’s her only goal.

One thought on “But, Do I Have To… @olivianightreads #RLFblog #RomanticSuspense”