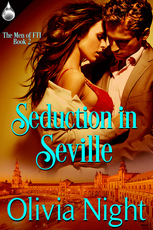 This quick interview includes info about the author and introduces the story.

Olivia Night, a fictional character herself, has always been an avid reader and writer. She found the romance genre in college and has never been able to get enough. One sleepless night, the main characters of Book One in her Men of FTI  series sprang from her head fully formed. They demanded she tell their story; so she did. As they revealed themselves, so did two other intriguing characters. Those characters convinced her to give them their own books because their stories were worth telling too. And so Olivia suddenly became a romance author. When Olivia is not writing, she has the best job in the world, which, too, will remain a secret. In her free time, she reads, write, drinks wine, or is, most likely, out emulating Buffy the Vampire Slayer. Olivia lives in one of the most diverse and vibrant cities in the U.S.—Baltimore. She lives with her cat, which she is convinced was a gladiator in his past life. Olivia plans to continue being awesome at this thing called life. Really, that’s her only goal.

Why did you write this book?
This novel is the second in a series. The main characters, Patrick Kane and Madison Lockwood are introduced in the first novel. Their story is very different from Seduction in Sierra Leone, but all the suspense, sexiness, and love are all there!
What is your favorite genre to read?
It actually varies depending on my mood. But I have an entire book case dedicated to Historical Non-Fiction and Biographies. So totally different from Romantic Suspense obviously!
Who is your favorite character from fiction (not including your own)?
Anne Shirley, without a doubt. I love her spunk. And I like to think that I have it, too!
What are you working on at the moment, and will see from you in coming months?
The third novel in this series, Seduction in Scotland will be released on August 1st. I also just finished a manuscript for a new series tentatively titled A Second Chance Series. I am really excited about both of these novels. A spin-off of The Men of FTI is in the works as well. The series is titled Interitus and follows a  group of military men who are part of a secret “peace making group”.

In a hospital in Seville, Spain, Patrick Kane lies in a coma. Ambushed and shot while protecting a friend, he fights to survive.
She never thought she would see him again. Patrick, the man who’d brought her back.
Eight years ago, Patrick Kane, a joint partner in Fairlane Trade International, descended into a basement of horrors. That horrible day he rescued many women, but one he would always remember. Her beautiful doe eyes filled his dreams and haunted his nightmares.
Madison Lockwood, a nurse, has struggled to put her past behind her, trying to forget the time she spent in captivity. But she recognizes the man who rescued her and brought her out of that terrifying reality. She owes him her life. Patrick is gravely injured, and Madison vows to see him through.
When Patrick opens his eyes, he instantly knows that he made a mistake leaving Madison after freeing her from the clutches of a human trafficking ring. She is meant to be his. As Patrick tries to win over a wary Madison, the past they both thought was gone for good comes back with a vengeance. One by one, the survivors of the horrific ordeal are being murdered. Patrick knows that Madison will be next if he doesn’t protect her.
Together they must fight for their survival. Seduction In Seville, book two in the Men of FTI series, is a tale of redemption, murder, new beginnings, and love that takes the reader on a wild, exotic ride.

One thought on “Seduction In Seville A New #RomanticSuspense @olivianightread #RLFblog”