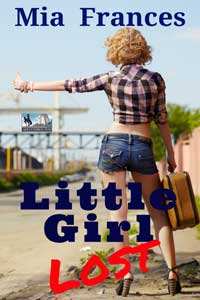 Mia Frances, welcome to Romance Lives Forever. I’m Kayelle Allen, author and owner of this blog. Happy to have you here! Please tell us about your book.

Genre: Romantic Suspense.
Book heat level (based on movie ratings): R (Hot. For adults only)
Sheriff Zac McHenry is fit to be tied. A new “working girl” just showed up at the local truck stop. He doesn’t want “her kind” in town! He arrests her, but things aren’t what they seem. She’s no hooker…she’s a librarian! Her name is Ali, and she’s trying to track down a 13-year-old runaway. The girl disappeared from the truck stop a week ago and hasn’t been heard from since. Zac tries to send Ali packing, even checks her out of her motel room, but she refuses to leave until she finds the girl. With the rodeo in town and all the hotel and motel rooms in the area booked up, Ali finds herself temporarily homeless. With no place else to go, she moves in with the sheriff until a room becomes available. Zac thinks his houseguest is a foul-mouthed, ill-tempered hellion. She thinks he’s an interfering, arrogant bully. But when they work together to investigate a case of kidnapping, human trafficking, and murder…sparks begin to fly. Is this any way to start a romance?
Why did you write this book?
The idea for Little Girl Lost came from a program I saw about two girl cousins, ages 14 and 15, from Toledo, Ohio who were on their way to get milkshakes from a nearby fast food restaurant and were kidnapped. It was starting to rain when a car with a man and woman inside pulled up beside them. The man offered them a ride to the restaurant. The girls mistakenly thought he was the father of one of their friends and got in. He was actually a violent pimp with a long rap sheet.
The girls were threatened and kept locked away in a house during the day and taken to motels at night where they were coerced into having sex with strangers. After several days, they were transported across state lines and taken to truck stops where they were forced to prostitute themselves to the drivers.
Thankfully, those girls were found by the authorities and reunited with their families. They managed to escape alive and are now trying to overcome the trauma and rebuild their lives. Lots of victims aren’t that lucky.
I was so taken by their story that I researched the topic and discovered that a lot of teenage runaways fall victim to such predators. The numbers are staggering! In a 2008 news’ report, three years after the girls’ ordeal ended, it was estimated that there were then 100,000 minors forced into sexual bondage by pimps and human traffickers.
I thought a human trafficking investigation would make a good plot for a romantic thriller. I decided my heroine, Ali, would be a youth librarian from upstate NY who’s trying to track down a 13-year-old runaway. Ali is a former foster kid who’s struggled to make a life for herself.
I decided on her background after seeing another TV show about how difficult life is for foster kids when they age out of the system. How many of them turn to drugs and the street. Ali runs programs for at-risk teens and preschoolers at her library. The girl she’s after, a foster kid too, participated in her teen drop-in program. Ali is investigating what happened to the girl when she runs afoul of a county sheriff in Wyoming.
He’s big, bossy, and a conservative Republican. She’s a petite, liberal Democrat with a short temper and a big mouth. They clash, but have to put their differences aside to work together to solve a series of abductions and murders.
What is your favorite genre to read?
I love murder mysteries and romantic suspense.
Who is your favorite character from fiction (not including your own)?
V.I. Warshawski, the Chicago Private Investigator created by novelist Sara Paretsky. I’ve read about 10 or 11 of the books in the series thus far. She’s smart, strong, tenacious, and a tough as nails detective.
What are you working on at the moment?
I’m finishing up the third book in my Millie Muldoon holiday mystery series, which I hope to have out in time for Halloween. They are early chapter book and written for 3rd grade readers. I write children’s books under a different pen name.
What books will we see from you in coming months?
I’m working on the final draft of a post-apocalyptic romance, set in the Adirondack wilderness of upstate NY. It will be out either later this year or early next. I haven’t settled on a title yet, I vacillate between Wolf’s Woman or Tribes.

Where to buy Little Girl Lost

Mia Frances is a pen name of author Mary Vigliante Szydlowski. She writes across several genres using this and other pseudonyms. As Mia Frances, she’s the author of the steamy romantic suspense novel, Little Girl Lost and the IN HIS KEEPING erotic romance, murder mystery thriller series: In His Keeping: Taken, In His Keeping: Banished, and In His Keeping: Claimed. Her Science Fiction works include novels: The Ark, The Colony, The Land, Source of Evil, and novella The Hand of My Enemy. She’s also the author of dark fantasies: Worship the Night and Dark Realm, and mainstream novel Silent Song. She’s published seven children’s books: Ghoul School, Millie Muldoon and the Christmas Mystery, Millie Muldoon and the Case of the Thanksgiving Turkey-napper, A Puddle for Poo, Kia’s Manatee, The Duck in the Hole, and I Can’t Talk, I’ve Got Farbles In My Mouth.
She’s a member of the Authors Guild, RWA (Romance Writers of America), SCBWI (Society of Children’s Book Writers and Illustrators), and SFWA (Science Fiction Fantasy Writers of America).
Website http://www.maryviglianteszydlowski.com/
Twitter https://twitter.com/maszyd
Facebook https://www.facebook.com/miafrancesauthor/
Pinterest https://www.pinterest.com/maryvigliante/
Goodreads https://www.goodreads.com/author/show/1433375.Mary_Vigliante_Szydlowski
Amazon Author Page