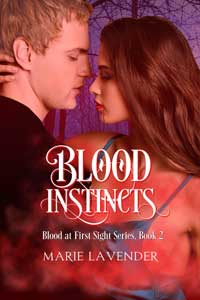 Welcome to Romance Lives Forever. I’m Kayelle Allen, author and owner of this blog. Let’s play Is It True with today’s guest, Marie Lavender, author of Blood Instincts, a paranormal romance/urban fantasy with a futuristic angle. This is a game with yes and no questions. Writers can elaborate on answers as much as they choose.

Genre: Paranormal Romance/Urban Fantasy
Book heat level (based on movie ratings): R
Enter the Other World at your own risk…
What if you found out that you weren’t exactly…human?
Myah Sullivan is suddenly living that nightmare. There are Others in the world, dangerous, supernatural creatures that make her mind spin and cause her to question the reality she’s always known.
Oliver King is her savior, a vampire who tries to show her the way. Through her journey she learns far more than she ever thought she would about herself, and about the past. Soon, she discovers that there is so much more to meeting Oliver than mere happenstance.
Can Myah accept her new reality, or will she retreat into that normal, safe world she once thought was her own?

this is your first book?
No, I have been published since 2010.
this book is part of a series?
Yes, this novel is book two of the Blood at First Sight Series. This will be a trilogy when it’s all finished.
you lost sleep while writing this book?
LOL. Some sleep, yes. Often my characters keep me awake and won’t shut up until I write a scene or chapter.
you did research for this book?
Yes, I always do research for the books I write.
some characters in this book are not human? (pets for example)
Of course. What would a paranormal romance be without different creatures? The Other World, as I call it, is comprised of various supernatural species. Those that this book touches on are vampires, shapeshifters, witches, pixies and fairies.
this book has more than one genre?
Yes, my books often cross genres. So there is definitely paranormal romance/urban fantasy with a hint of a futuristic realm.
you speak more than one language?
Sort of. Though I’m fluent in English, my Spanish is a bit rusty, and I only know a handful of French words.
you grew up where you live now?
Yes, I’m still in Indiana, in a small town.
you love to read?
Of course! I’ve always loved reading books. From the time I was a kid, my nose was buried in one. I found the fictional world a great escape.
you are never late?
Not because I want to be. I really hate being late, but sometimes it’s out of my hands. Or the muse has other ideas.
you love pizza?
I love pizza! My doctor has me on a gluten-free diet right now, though, so that puts a bit of a damper on things.
you love sushi?
Yes, I adore sushi. I think salmon or tuna might be my favorite, though I’m willing to try others. Just not the bizarre stuff.
you have a pet?
I have two cats, actually. Emma and Katerina (Kit Kat).

Where to buy Blood Instincts

Multi-genre author of Victorian romance, Upon Your Return, and 23 other books. Upon Your Love and The Missing Piece placed in the TOP 10 on the 2017 P&E Readers’ Poll. Directions Of The Heart was nominated for the 2017 Reader’s Choice Awards. The I Love Romance Blog became a finalist in StartDating DK’s Romance Blog Awards of 2017. ILRB landed on Feedspot’s 2017 Top 100 Novel Blogs and TOP 100 Romance Blogs. Directions Of The Heart placed in the Top 10 Books of 2017 on Amy’s Bookshelf Reviews blog. Top 20 Authors of 2017 on Amy’s Bookshelf Reviews blog. Mystery Blogger Award for 2017. A to Z Blog Challenge Survivor in 2016. March 2016 Empress of the Universe title – winner of the “Broken Heart” themed contest and the “I Love You” themed contest on Poetry Universe. Second Chance Heart and A Little Magick placed in the TOP 10 on the 2015 P&E Readers’ Poll. Nominated in the TRR Readers’ Choice Awards for Winter 2015. Poetry winner of the 2015 PnPAuthors Contest. The Versatile Blogger Award for 2015. Honorable Mention in the 2014 BTS Red Carpet Book Awards. Finalist and Runner-up in the 2014 MARSocial’s Author of the Year Competition. Honorable mention in the January 2014 Reader’s Choice Award. Liebster Blogger Award for 2013, 2014 and 2016. 2013 and 2014 Amazon Bestseller Ranking for Upon Your Return. Top 10 Authors on AuthorsDB.com. Winner of the Great One Liners Contest on the Directory of Published Authors.
Marie Lavender lives in the Midwest with her family and three cats. She has been writing for a little over twenty-five years. She has more works in progress than she can count on two hands. Since 2010, Marie has published 24 books in the genres of historical romance, contemporary romance, romantic suspense, paranormal romance, dramatic fiction, fantasy, science fiction, mystery/thriller, literary fiction and poetry. She has also contributed to several anthologies. Her current published series are The Heiresses in Love Series, The Eternal Hearts Series, The Magick Series, The Code of Endhivar Series and The Blood at First Sight Series.
Website: http://marielavender.com/
Blog: http://iloveromanceblog.wordpress.com/
http://marielavenderbooks.blogspot.com/
http://marielavender.blogspot.com/
Twitter: https://twitter.com/marielavender1
Facebook: https://www.facebook.com/marie.lavender.58
https://www.facebook.com/MarieAnnLavender
Goodreads: https://www.goodreads.com/author/show/6938764.Marie_Lavender
Amazon Author Page: http://Author.to/MarieLavender
Newsletter: http://bit.ly/1g3wO13

One thought on “Is It True: Blood Instincts By Marie Lavender @marielavender1 #RLFblog #ParanormalRomance #PNR”