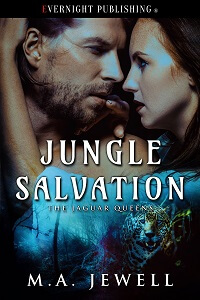 Let’s meet Matteo D’Cruz from Jungle Salvation, The Jaguar Queens Book II, a paranormal romantic suspense novel, by MA Jewell. Welcome to Romance Lives Forever. I’m Kayelle Allen, author and owner of this blog. Happy to have you here! Please tell us about your latest book.

Jaguar shifter males lost in their cats are all animal, feral. Execution is the only course. Enforcer Matteo D’Cruz has terminated two and doesn’t care that he’s next–until Dakota.

Dragged back into the human world by well-meaning friends, jaguar shifter Matteo D’Cruz realizes he’s been in cat form for over seventy years. With another transformation, he could lose his tenuous hold on his humanity. In their world, the only end for a feral is execution. Damaged by grief and guilt, he doesn’t care overmuch. However, when he discovers an unmated latent female, he can’t resist her scintillating allure or his instinct to protect her at all costs.

Carefree Dakota Gorman travels to Brazil to rescue her sister. Determined to expose the drug lords who have manipulated her sibling into a hurried wedding, she’s certain the baffling hottie Matteo is one of them. After Dakota’s sister turns into a giant jaguar before her eyes, she must confront a new reality, one including latent family traits.

Matteo helps her trigger her first exhilarating metamorphosis into a jaguar, leaving no doubt about her genetics, but unknown shifter enemies cut short her joy.

A blackmailer sends Matteo a video of her transformation, demanding DNA samples. The extortionist threatens to post the recording to the internet and expose the shifters to the world. Dredging up courage that she didn’t know she possessed, Dakota joins Matteo and the other jag shifters to save her family–and her new species–from scientific experimentation.

After living as a jaguar in the Amazon for a few decades too long, Matteo has a unique appearance. Natural, tawny dreadlocks followed him into his six-foot plus human form, along with rich copper eyes and a V-shaped pattern of ochre rosettes down his back. When he’s enraged, he snarls, ensuring his adversary gets a glimpse of a great-cat canine.

Brilliant adrenalin junkie Dakota Gorman is bold, courageous, and protective of the weak and family, yet others see her as a carefree fashionista with an irresponsible streak. With two partially completed bachelors, and an abandoned medical degree to her credit, some even call her flighty. Discovering her true inner strength rocks Matteo to his core.

Any shifter party is a danger zone. Jag males are solitary and territorial, and since the females died out over seventy years ago, most have never even seen an unmated queen. The discovery of the latent females in the United States invigorates the all-male clan with hope for the future. Now, however, their mixed gatherings are powder kegs with a flame licking at the fuse.

Matteo has two roles. As a guest, he would travel from table to table, exchanging arm clasps and man hugs with the older males and fist bumps with the young ones. However, no one at the party would mistake his congenial manner for relaxed.

Matteo had thought a gathering of mixed company a thing of the past. So when viewing a room filled with male and female jag shifters flirting and getting to know one another, a sense of awe and hope for the future often strikes him. Enough to make him clear his throat to cover the emotion.

Since he retains a keen jaguar sense of smell while in his human form, scents have an impact on him. Dakota’s alluring fragrance tortures him. Cat instinct to claim the formidable female often sends a shift’s heat racing over his skin. Seeking relief, he’ll rub at his nose, though it’s a wasted motion.

Matteo always resists a desire to find a solitary table. Because he must keep the peace, he makes frequent stops to greet young males flirting with the fair-skinned latents.

With a high need for carbs in human form, Matteo prefers fruit juice, specifically acai juice. Few drugs have any effect on shifters, and alcohol’s taste doesn’t appeal, but he’d thought he might enjoy the fun buzz reported by humans.

After shifting from cat to human, a need for carbs is impossible to ignore. A pitcher of fruity juice is not out of the question. However, if pastry is near, he prefers coffee.

As the Enforcer, Matteo will search any secluded areas regularly. In this particular party, the females don’t yet know they are cats and are uninformed about the risks of an accidental mating. Any male who takes advantage of a naïve queen will answer to the Enforcer.

Matteo has few close friends, and he values those males as brothers. These older males, the ancients, will coordinate security between them, following Matteo’s lead. No one “latches on” to him. He’s too intimidating to most jag males.

Any male who picks a fight with Matteo is likely driven by cat instinct rather than any logical thought. He’d employ a submission hold and pin the impaired male with a dominant glare until the shifter came to his senses.

If Matteo manages security at the party, he would not concern himself with sensitivities or perceptions. However, in a truly social setting, he will leave as early as politely possible.

Those few with authority over Matteo must earn his respect, and even then, if their logic is flawed, he will push back.

Likely due to his roots in the previous century, and assuming the attacker is male, his initial reaction will depend on the victim’s gender. If male, Matteo wonders if the man deserves the beating. If female, he calculates how to intervene.

Regardless of the victim’s gender, he will stop the assault to determine the facts, and after he’s satisfied his curiosity, he’s not above allowing a deserved punishment to continue.

Having a military background, he views retreat as a strategy to win a war or to minimize casualties. That said if a shifter female is involved, all bets are off. No sacrifice is too high to save a single queen.

He’d ignore the person with overt disdain, and if forced to interact, things will go poorly for any individual who has previously disappointed Matteo.

Despite his hardened nature, Matteo encourages young ones to challenge themselves, to become more than they are. He’d counsel the younger shifter in the moment, however, depending on the stakes; he’s also comfortable taking matters into his own hands.

He focuses on his main objective, the endgame goal. And if an enemy caused this pain, he plots his revenge.

Matteo endured decades of grief for a lost mate. He will spare Dakota that pain. (No more spoiler on that one lol)

He’s an educated savage with a gentleman’s heart.

Where to buy Jungle Salvation, The Jaguar Queens Book II

MA Jewell began adulting as an operating-room nurse. An avid romance reader for many years, she traded in her reading addiction for a pen to write down all the stories clogging up her brain. Now, she can’t stop.
Recently transplanted to Dallas, Texas, she enjoys her own happily ever after with her biggest fan and supporter, her husband, Jim. Their two sons have fledged and married lovely, competent women. And if you have an extra twenty minutes, go ahead and ask about her two perfect grandchildren.
Book III of The Jaguar Queens series, Jungle Desire, is in the works. To get early details on releases, sign up for her Precious Gems newsletter below. Drawings are held with each issue, too!
Twitter https://twitter.com/MAJewell_author
Facebook https://www.facebook.com/melody.jewell.5245?ref=bookmarks
Pinterest https://www.pinterest.com/melodyjewell11/
Instagram https://www.instagram.com/melodyjewell11/
Goodreads https://www.goodreads.com/author/show/16785164.M_A_Jewell
BookBub https://www.bookbub.com/authors/m-a-jewell
Amazon Author Page https://amzn.to/2NmGBJl
Get to know MA Jewell better by signing up for their email newsletter.
https://dl.bookfunnel.com/b9ril5yb96 (10% sample of Jungle Salvation download included)