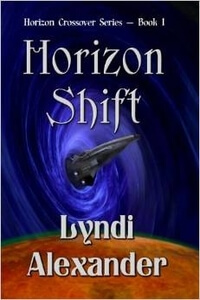 Let’s meet Temms Rogers from Horizon Crossover series, a space opera, by Lyndi Alexander. Welcome to Romance Lives Forever. I’m Kayelle Allen, author and owner of this blog. Happy to have you here! Please tell us about the story your author wrote.

Genre science fiction, space opera
Book heat level (based on movie ratings): G
In an attempt to save his ship and its crew, Captain Temms Rogers uses an untested alien technology which hurls the Doubtful and its occupants away from a massive space battle. Rogers awakens to find his ship crippled and his crew decimated. They are lost in an unknown region of space, but they are but not alone. As they struggle to survive, they encounter multiple local groups, including mystical beings known as the Ancients. Can Rogers and the crew of the Doubtful find a way to survive in this strange corner of the universe?
Rogers and the crew of the spaceship Doubtful are caught between a powerful interplanetary group called the Agency and mystical beings known as the Ancients.
With the voices of the Ancients haunting his dreams and a mysterious illness plaguing his crew, Rogers must find a derelict space station and discover its secrets before the Agency destroys them all.
The Agency is tired of Captain Rogers’ urging for democracy in their region of space. Rogers soon realizes the Agency intends to use him and the crew of the Doubtful for their purposes or else.
Can he gather the other captains of the sector in rebellion against the Agency, with all its echoes of his earlier battle against the Confederation, and bring down their repressive regime? Or will Rogers lead his crew into a fight they cannot win?

Please tell me about yourself.
Age: 57

Species (for scifi/fantasy characters): Human
What do you look like?
Not too bad for a man of my age. But the years are creeping up on me, you know? A little thicker round the middle than I used to be. Hair more salt than pepper these days. But I earned every one of those gray hairs.
Who is the significant other in your life?
It was Kitana, my first officer. But she died in the Crossover to this universe. I’m still getting used to the idea she’s gone.
How do you dress?
For so many years, I wore the Confederation uniform. Since I’ve broken with my old commanders, though, I’m just as likely to be seen commanding the ship in a bright-colored Hawaiian shirt and slacks.
Are you book-smart, self-taught, widely-experienced?
I went through the basics at the Academy, then went on to study history and military tactics for an advanced certificate. But I tend to live by what I learned in practice on the deck of a spaceship. Most importantly, I’ve learned how to size up people. Just because they’ve been in trouble with the law, or failed by society’s rules, doesn’t mean they can’t become a valuable crew member. This is very important to me.
What is your viewpoint on wealth?
Wealth? As in great piles of money? Doesn’t really matter to me. My ex-wife Connie always competed in the officers’ wives chaos—who had the best personal vehicle, maids, proper landscaping, all that. But these days as long as I can keep my crew working and fed, I’m pretty happy. That is, until greedy taxing bodies like the Agency come along, trying to take an unfair percentage of what we’ve earned. Then I’ve just got to politely—or not so politely—decline.
Are you close to family? Do you have children?
I have twins, a boy and a girl, still in school, living with their mother. Our oldest son Tommy followed me into service with the Confederation. I don’t think his mother will ever forgive me.
If someone from your past showed up, who would you most want it to be, and why?
I’d love to see my daughter Linz. *with a sigh* She always was a little shallow; her mother encouraged that stuff about being fashionable regardless of the cost, about being a pretty butterfly rather than a smart student. But now that we’re in a new universe, I expect I’ll never see her or her twin brother Alex again.
If someone from your past showed up, who would you most NOT want it to be, and why?
Jal Burko. He led the Confederation mission that hit my breaking point and caused our ship to rebel. The last thing I heard him say when we used the alien device to escape his vengeful attack was that he’d get me for this. As it stands, he may have followed me into this new universe. If so, I expect he won’t give up until one of us kills the other.

Where to buy Horizon Crossover series

Lyndi Alexander always dreamed of faraway worlds and interesting alien contacts. She lives as a post-modern hippie in Asheville, North Carolina, a single mother of her last child of seven, a daughter on the autism spectrum, finding that every day feels a lot like first contact with a new species.
Website https://www.goodreads.com/author/show/4185290.Lyndi_Alexander
Facebook https://www.facebook.com/lyndialexander13/
Goodreads https://www.goodreads.com/author/show/4185290.Lyndi_Alexander
Amazon Author Page https://www.amazon.com/Lyndi-Alexander/e/B005GDYPU2