Tied down by guilt and separated by quarantine, Mateo and Deja decide to free themselves with a New Year’s Eve night of passion. But will it destroy their family and friendship?

Lyndell Williams, welcome to Romance Lives Forever. I’m Kayelle Allen, author and owner of this blog. Happy to have you here! Please tell us about A Stroke at Midnight. 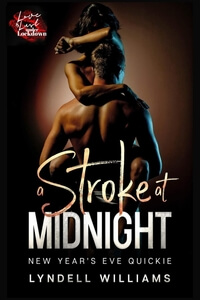 A Stroke at Midnight by Lyndell Williams

He will have her before the year is out!

Mateo spent too many years craving the taste and touch of Deja’s body. He restrained from taking his brother’s widow to bed. Now the sinner in him is winning the battle. He is through imagining all the naughty things he can do with her. Time to put all his kinky plans into action.

He assembles his toys, determined to stroke Deja by the time the clock strikes twelve on New Year’s Eve.

Deja knew it was wrong to lust after her dead husband’s brother. She tells herself that Mateo only wants to help raise her son, but she can’t keep ignoring the way he looks at her and how it makes her tingle with desire. She can’t resist the call of his hot body, and she does not want to.

Tied down by guilt and separated by quarantine, Mateo and Deja decide to free themselves with a New Year’s Eve night of passion. But will it destroy their family and friendship?

Where to buy A Stroke at Midnight