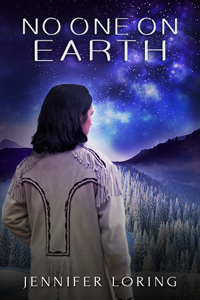 Welcome Jennifer Loring author of No One on Earth, a new m/m
sci-fi romance.
Why did you write
this book?
After Glows Publishing had put out a call for m/m sci-fi
romance novellas to be collected into a holiday-themed anthology. The concept
interested me, so I experimented with a couple of different story ideas, all
involving Native American folklore, before settling on the legend of the
Handsome Fellow. I grew up on a reservation, but this was my first time writing
an indigenous character. I don’t think it will be my last. J Anyway,
the novella first appeared in Starstruck Holidays this past Christmas and is
now releasing on its own.
What is your favorite
genre to read?
It will probably always be horror. I also love non-fiction.
Who is your favorite
character from fiction (not including your own)?
Two are characters I’ve loved since I was a
teenager—Irrylath from The Darkangel Trilogy by Meredith Ann Pierce and Zach
from Poppy Z. Brite’s Drawing Blood. I also adore Constantine from Robin
McKinley’s Sunshine.
What are you working
on at the moment?
A Gothic/paranormal romance novella for After Glows,
concepts for a narrative game, and a lot of short fiction.
What books will we see
from you in coming months?
March will bring my novella Prison Made of Mirrors, a
retelling of Snow White, from Strange Fictions Press. The final book of The
Firebird Trilogy (The Pieces of Us) releases from Limitless Publishing in April,
and the first Erotikós anthology—containing two of my erotic horror short
stories—from DarkFuse. In May, I’ll be in a contemporary romance anthology that
I can’t talk about yet.
Please tell us about
your latest book.
Genre: m/m sci-fi romance
Book heat level (based on movie ratings): R
Jon, a psychic since childhood, has never felt at home in
the world, even less so after his lover died on Winter Solstice a year ago.
Since his abilities failed him when he needed them most, he turns to alcohol
and rejects his family’s assertion that he is a Star Child—an alien/human
hybrid. When Jon’s sister suggests he should look into the legend of Handsome
Fellow, Jon decides that if he cannot find happiness himself, he will bring it
to others.
Erukkass’ people, a species of interdimensional aliens, have
been observing Earth and interacting with humans for so many centuries that
some Native American tribes believe their ancestors originated from the stars.
After his lover passed away in what appears to be a medical accident, he
accepts a scientific mission… but not for the reasons his government expects. He
has located his beloved on another timeline, in another universe—ours—and he
will not leave without him.
Jon returns home from work one evening to find a gift of his
own—a strange young man waiting for him. Erukkass unveils one stunning
revelation after another, including the truth behind his lover’s death and the
nature of time itself. Can he and Jon forge a future together, or will two
timelines that have always intersected, no matter when or where, finally be
forced to diverge?
Publisher: http://www.afterglowspublishing.com/no-one-on-earth/

Jennifer Loring has been, among other things, a DJ, an
insurance claims assistant, and an editor. Her short fiction has been published
widely both online and in print; she has worked with Crystal Lake Publishing,
DarkFuse, and Crowded Quarantine, among many others. Longer work most notably
includes the contemporary/sports romance series The Firebird Trilogy and the
critically acclaimed psychological horror novella Conduits. She lives in
Philadelphia, PA with her husband, their turtle, and two basset hounds.
Website: http://jennifertloring.com