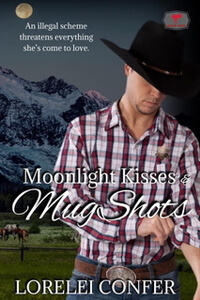 Lorelei Confer introduces the Saddle Creek series with heart throbbing romance and edge-of-your-seat suspense. Lorelei, welcome to Romance Lives Forever. I’m Kayelle Allen, author and owner of this blog. Happy to have you here! Please tell us about your series.

Moonlight Kisses and Mug Shots in the Saddle Creek series

Veronica (Ronnie) Travis accepts the challenge to move from Miami, FL to Saddle Creek, WY to manage her aunt’s legacy; Travis B&B. With no money in the bank to pay bills, but an updated and posh home, Ronnie’s suspicious of her aunt’s possibly clandestine activities.

Sheriff Mitch Rogers, a permanent non-paying guest at the B&B is convinced the late owner was hiding something from him. When her niece arrives to take over, he believes she knows something, but she isn’t ready to share until….

Blackmail, attempted murder, fugitives, lying wives, kidnapped parents, and home invasions interfere with the investigation of illegal money and surreptitious actions. Ronnie faces the probable seizure of the B&B, a huge sacrifice and her late aunt’s legacy left in her hands. Thanks to Ronnie, the Sheriff arrests a long-time fugitive, as well as one of his own deputy’s for attempted murder.

Ronnie saves the day connecting the dots between Aunt Sally’s activities and the actions of the fugitive; Sally’s meticulous recordkeeping verifies the actions of all involved.

Who wins? When Rosie’s Diner becomes a crime scene, the entire town changes.

At least two more plus another Christmas Trilogy

Four young men who were close friends since childhood.

The camaraderie and loyalty of four males, close friends since childhood, as they slide into adulthood.

Rustlers and Romance, An Uptown Girl and A Cowboy, Secrets and Deceptions, Moonlight Kisses and Mugshots, A Saddle Creek Christmas Romance: A Trilogy, 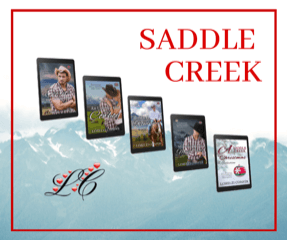 The bantering of the four guys when they would all come together to help one of them. They know each other so well, and offer advice based on years of loyalty, understanding, friendship, and integrity.

I’ve written three Christmas novellas as part of a Christmas Trilogy for this year, similar to last year. And also, another full novel of two secondary characters who have a mutual attraction, working title is Partners and Perils.

I’ve also written the Deadly series, six books, about human sex trafficking. As well as a couple other miscellaneous novellas.

Where to buy Moonlight Kisses and Mug Shots

Lorelei Confer lives on a peninsula in the mid-west coast of Florida with her high school sweetheart, now husband, and AJ, her longhaired Chihuahua.
In the fourth grade, she wrote her first story–something about getting a shot at the doctors–that was produced by the teacher for parents and students in an assembly. When she was older, she spilled her guts in a journal every night and wrote long newsy love letters to Viet Nam.
She is a multi published hybrid author of romantic suspense with two series: The Deadly series and the Saddle Creek series. She also has written numerous novellas and short stories.
She loves to hear from her readers so if you want to stay “in the know” visit her website, sign up for her newsletters and contact her.
Website www.loreleiconfer.com
Blog www.loreleiconfer.blogspot.com
Twitter https://twitter.com/loreleiconfer
Facebook https://www.facebook.com/LoreleiConferAuthor/
Pinterest https://www.pinterest.com/loreleiconfer/
Goodreads https://bit.ly/2U1jLw9
Amazon Author Page https://www.amazon.com/Lorelei-Confer/e/B004HX4G6K/
Newsletter https://bit.ly/2UZyQe1
Instagram: https://www.instagram.com/lorelei.confer/
Get to know Lorelei Confer better by signing up for their email newsletter.
https://bit.ly/2UZyQe1